Round 1: Matt Linde vs. Dave Humpherys 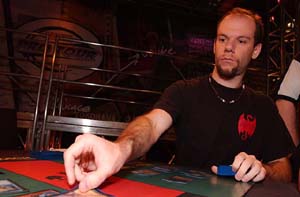 Your Move Games mainstay Dave Humpherys has found a new life on the golden shores of California. Would his physical distance from his teammates affect his practice time, or will the seemingly twenty-four hours a day he spends on Magic Online keep him at his "A" game? Meanwhile, Pro Tour mainstay and facially pierced Matt Linde seeks to improve on his top sixteen booster draft finish at PT Nice with a win here in freezing Chicago.

Both players kept their opening hands, but neither had a play until Matt's third turn morph guy. Dave drew on his third turn...and failed to play a third land. This allowed Linde to swing for two, and play yet another mystery meat.

Looking to get back into the game, Dave finally drew a Swamp, and played a morph of his own. When Linde entered the redzone with three Islands and a Mountain untapped, Dave blocked. The creatures traded, revealing them to be Fallen Cleric on Linde's side, and Birchlore Rangers on Dave's side. Matt then cast yet another face down creature.

Dave drew, and still couldn't coax any mana to the top of his deck. He played the fifth morph creature of the game, and passed the turn to his opponent. Linde cast Sage Aven before the attack, and revealed a very weak top four cards: three lands and a Mage's Guile. Both his non-summoning sick creatures went to the red zone, with invisible Disruptive Pitmage trading mortal blows with invisible Towering Baloth. Meanwhile, Dave repeated his last two turns of playing a morph creature, sans any more land.

Matt dropped an Avalanche on the newest blocker (dead Treespring Lorian), and swung for three, dopping Dave to eleven. Dave retaliated by cycling Dirge of Dread, which finally gave him a fourth land—and also allowed him to cast Wirewood Elf. Although the two creatures slipped in the next turn, this allowed Your Move Games relocatee Humpherys to cast Silvos against Linde's upcoming land glut.

Linde could only come in for one via his now puny looking 1/3 flyer, while Dave followed his 8/5 trampling legend with the untargetably large Gigapede. Suddenly the entire momentum of the game shifted. Dave still had a full grip of cards, while Linde desperately cycled past his lands to get to a pretty insignificant looking Sparksmith.

Crown of Suspicion took care of the one toughness goblin as all three green men swung through. Yet unmorphed Spined Basher killed the Gigapede, but the Legend reduced Linde down to a mere three life. Matt knocked on his deck, drew his card face down, and after a few seconds of thought dared to peek. Staring back at him was land number ten of the game to go with his six spells.

As the game ended, Matt expressed his disgust at the Aven. "When I saw all lands on top, I wanted to puke. I just wanted to concede right there and then." Dave agreed. "If I hadn't been stalled at three lands..." Linde completed the thought, "that was the only thing that kept me going."

As they sideboarded and shuffled up, Matt brought up the Gigapede. "It amazed me how late you got that Gigapede. People at the table were taking stuff like Elvish Warrior over it, and Gigapede is just a monster. I've gotten to draft it on Magic Online a few times, and it's always been a beast for me."

Both players kept again, with Matt thinning his deck on turn one via Mage's Guile. The morph parade started on turn three. Matt's 2/2 generic dude swung past a third-turn summoned Wellwisher—and then Linde gave up the turn with four untapped lands, and Complicate, Pinpoint Avalanche, Essence Fracture, and two lands in hand.

Dave drew, and gave the turn to Linde. During Linde's upkeep, Dave cast Swat targeting the unknown quantity. Matt chose not to counter, and neither player cast any spells until Matt reached six mana and safely dropped Nosy Goblin with counterspell backup.

By the time the Goblin attacked, Dave had regained all his lost life and gotten to twenty via his Wellwisher. Mistform Wall came onto the board, followed by Wirewood Elf. The mana producer traded with the goblin, so Linde merely replaced his 2/1 with the now potent looking Sparksmith (much better with Linde at a full twenty life and paired up with Mistform Wall). The Hump attempted to Cruelly Revive the little pinger, but Linde finally found an opening to cycle his Complicate against the now tapped-out geneticist.

Dave brought his game with Krosan Tusker, which died as soon as Linde untapped to the combination of Sparksmith and Pinpoint Avalanche. This tapped Matt out of red mana, so Dave took the opportunity to drop Mythic Proportions on his 1/1 life gain elf, making it a 9/9 trampler. 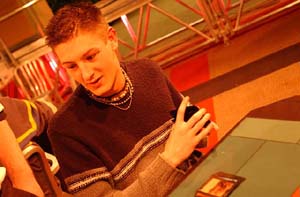 Of course, Linde took the first opportunity possible to unsummon both the Wellwisher and his own Mistform Wall with the Essence Fracture he'd been nursing since his opening hand. Dave cycled twice, but found no answers as Linde went on the offensive for two. Goblin Machinist joined the board, backed by eight mana (three of them now Mountains).

Dave scrambled to keep control of the game, casting both Wellwisher and a morph creature, and then immediately enchanting the unknown guy with Improved Armor to make it 5/7. Matt drew, shot the Wellwisher down with Sparksmith, and then a top decked Chain of Vapor sent a newly revealed Cabal Executioner back to hand in exchange for a land and a one turn reprieve on the pumper coming across.

Dave dumped his hand on the board with Elvish Warrior and the Executioner, and Linde came across with his Machinist. One activation gave him land, Mistform Mask, dropping the Hump down to seventeen. Linde plopped another morph guy onto the board, and then shot Cabal Executioner at the end of Dave's turn to drop himself down to six.

Matt untapped, turned his wall into a goblin, and shot the 2/3 blocker for three. This time the Machinist came in for two full activations (Mistform Shrieker, two lands, and a Disruptive Pitmage), and Dave took eleven to the head in the red zone.

And then Dave drew Silvos.

And then Linde drew Choking Tethers, with Chain of Plasma backup in hand.

In celebration, Matt immediately jumped up and flipped over his match win card from zero to one at the feature match board. Dave could only laugh.

At last, it was Mr. Dave Humpherys turn to start the game. He took full advantage of his situation by casting a second turn Elvish Warrior, and following it with a third turn Leery Fogbeast. Matt played a morpher to stop the beast from coming through, but it couldn't stop the tougher elf. Dave ramped his mana up with Wirewood Elf, while Linde gave himself options with Sage Aven. His top four cards? Mountain, Island, Mage's Guile..and another Sage Aven. Back in Weatherlight, people used to dread casting the Owl of concession. It seemed that Linde lived under this curse.

While the 1/3 flyer didn't give Linde great top-of-deck options, it did give him a blocker big enough to stop the beats. Dave built up his forces with Symbiotic Elf, and then Linde played the best combination in blue/red for this block: wizard plus Lavamancer's Skill. Dave debated for a while, and then hard cast Krosan Tusker, losing Leery Fogbeast to the mega-tim.

Linde pondered for a while, and then decided to shoot Wirewood Elf on his own turn, plus send Elvish Warrior and Krosan Tusker back to Humpherys hand with his Undo. Bostonian turned Californian Humperys didn't miss a beat, plunking down a 5/4 Treespring Lorian with aplomb. Matt gave Dave another morph to think about, and Dave decided not to trade Treespring Lorian for a bad face down guy. Symbiotic Elf died to the Skill, and Linde played Goblin Machinist to the board against Krosan Tusker. 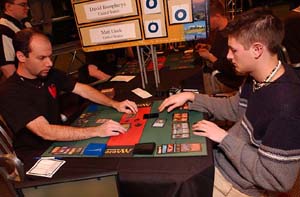 Dave attempted to cast Mythic Proportions to turn his 6/5 beast into a 14/13 trampler, but Matt was ready with Mage's Guile to act as a poor man's Intervene. Although the Tusker came through unblocked, Linde finally had the opportunity to cast the second Sage Aven, and combined it with Goblin Machinist to mill two lands and a Mistform Mask to the bottom of his deck.

With the ground almost completely stalled, Linde took to the air with his unenchanted bird wizard. Dave went for the win with Dirge of Dread, but Linde had Choking Tethers ready to stop all three of Dave's creatures at the beginning of Dave's attack. Mistform Shrieker joined the air parade, bringing the life totals to a more even thirteen to eight in the Hump's favor in two short turns, while Dave could only muster a twin Tusker. At the end of Dave's turn, Linde tapped all of Dave's huge monsters with a second Choking Tethers, attacked with all his guys except the Machinist, and revealed one of his morph creatures to be Skittish Valesk.