Round 1: Mattias Jorstedt vs. John Larkin

Both these players are on hot streaks at the moment. Mattias Jorstedt has made it to the top 8 at three out of the last four Pro Tours finally taking a title at the last one in Yokohama. Currently he's breathing down Kai's neck in the player of the year race. Larkin has also had a good year following his quarter-finals finish at last year's World Championships.

Larkin came out of the blocks with a turn one Rootwalla, but his deck didn't provide him with a madness outlet. He attacked with a pumped Rootwalla for a couple of turns and added a second before Jorstedt took them both out with a cycled Slice and Dice.

The Swede had laid a morph card on turn 3, but was in no hurry to flip it over. After Slicing the 'Walla's he dropped a Lightning Rift and cycled to shock a freshly summoned Merfolk Looter. 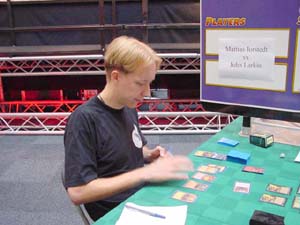 From then on the game started to go away from Larkin as Jorstedt unmorphed the Exalted Angel and started swinging. The Irishman dug for answers with Deep Analysis but none were forthcoming and they were swiftly onto Game 2.

Larkin admitted he should have mulliganed the last game. His hand for this game seemed better as Wild Mongrel entered play on his second turn and then he found an answer for Jorstedt's second turn Rift by Quiet Speculating for Ray of Revelation, Roar and a Deep Analysis.

Larkin left the Rift where it was for the moment. He flashed back Roar, taking 2 damage from City of Brass and then took another 2 when Jorstedt cycle-shocked him end of turn.

The Swede cleared the board with Wrath and then it seemed like Larkin's blue-green deck had run out of gas. He took more damage to flashback a Deep Analysis. He Rayed away the Rift and then Careful Studied a Rootwalla into play. 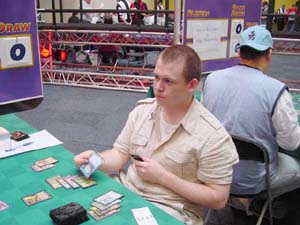 Then the Irishman seemed to draw a bunch of land and not a lot else. Jorstedt got rid of the 'Walla with a Slice and Dice and then started serving with Teroh's Faithful and Nantuko Monastery.

Larkin wasn't out of it though as he cast Upheaval, floating enough mana to follow it with an Aquamoeba. In his end step madness brought a discarded Rootwalla into play and it seemed like the game had been turned round for the Irishman.

Jorstedt dropped a plains and discarded a bunch of cards while Larkin slapped him back for 6 and madnessed a second Rootwalla into play.

The Swede dropped his third land, a mountain. Larkin was careful to play around Slice and Dice and only lost a Rootwalla. He had to race as he was only on 5 life and Nantuko Monastery was about to come online on the Swede's side. It bashed for 4 and then Larkin was brought to an ignominious end as Jorstedt sent a lowly Spark Spray to the dome for the one point of damage that was required.