Round 1: Melissa Detora vs. Eric Dupuis 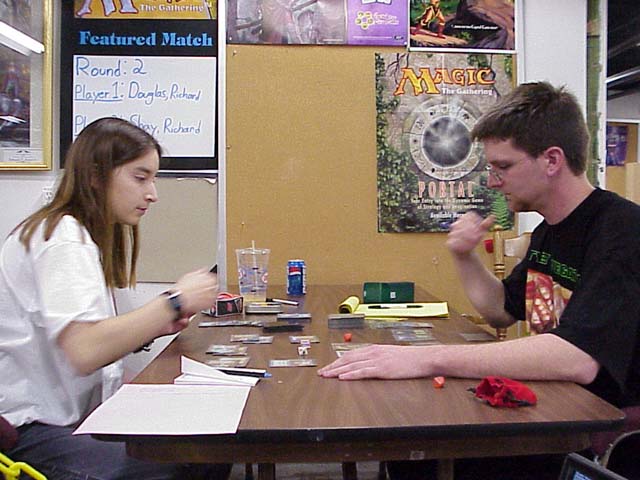 Detora summoned a Merfolk Looter on the second turn, only to have it immediately Edicted away. She countered Pernicious Deed, but had no answer to a turn 5 Spiritmonger, other then to cast Fact or Fiction. Dupuis offered her the choice of Counterspell and three lands, or Opposition. Although the other pile was certainly attractive, Detora needed the answer to a giant monster already in play, and settled for getting only one card out of her FoF.

Spiritmonger got tapped down via Ice once and got to hit once, until Detora finally got a creature – a Call of the Herd token – into play. Dupuis summoned Braids, which she could not counter. Although not usually a good card against a deck with Squirrel's Nest, Braids was certainly very powerful at the moment, as Detora needed all her mana to find answers to Spiritmonger and the subsequent threats Dupuis would be casting. She used the Elephant token to tap down the Spiritmonger and countered another Pernicious Deed.

Dupuis had a decision to make during his upkeep. He could go down to four lands, or sacrifice Braids in order to cast Haunting Echoes. Although Braids was certainly very strong at that point in the game, Dupuis chose in favor of Haunting Echoes, removing Detora's Counterspells, Looters, Facts, Calls, and Fire/Ices out of the game.

Ever since letting Braids go, things just kept getting worse and worse for Dupuis. Detora summoned a Wild Mongrel, and then cast Squirrel Nest, so Spiritmonger was no longer an issue and she was starting to attack, promising to end the game quickly.

Dupuis got a temporary respite when he got a Spellbane Centaur into play, but Detora cast a second Squirrel's Nest. Although she could no longer tap Spiritmonger, it needed to stay back and hold off a growing army of rodents. Soon, Detora had enough critters to lock down her opponent, tapping all of his lands during upkeep. Two turns later, she finally drew a source of red mana to summon Flametongue Kavu to take out the Centaur and end the game.

Dupuis just could not seem to catch a break. His opening hand featured five lands and two Elves. He threw it away only to get a six-land hand. He mulliganed again, getting three lands and two Birds of Paradise.

From that point on, Dupuis was drawing pretty well. He cast a second turn Pernicious Deed, restricting Detora to just how many threats she'd want to play out. An Elephant token raced against Wild Mongrel for a few turns and things were looking reasonably well, but Detora got an additional four cards via Fact or Fiction (the 1-4 split did not work out as well as in the previous game, as she really did not need a Flametongue Kavu badly enough to pass up on two lands, Circular Logic and a Wild Mongrel), and Merfolk Looter provided additional card economy, letting Detora draw a card as she cast Circular Logic.

Dupuis was finally forced to use up the Deed, but he followed it up with an Engineered Plague on Squirrels, making the Nest and an Opposition Detora was holding in hand far less powerful. Without any creatures in play or in hand, Detora cast Static Orb. She countered a pair of threats, leaving both players in top-deck mode. Dupuis summoned Llanowar Elves and a Bird of Paradise – neither very helpful under the Orb – and Detora finally drew another creature, casting a Merfolk Looter.

Dupuis finally mustered some pressure, summoning an Elephant token. Detora countered a Spellbane Centaur, leaving her opponent tapped out and finally cast her Opposition. At the end of Dupuis's turn she used the Looter's ability instead of using her only creature to tap down Static Orb and bring her eight lands back online.

Dupuis now had a pair of Elephants in play and they were the only permanents he could untap per turn. He needed to win the game before Detora could find more creatures – but she was using a Looter every turn, likely to get out of this predicament in time. Yet every card she drew seemed to be a land or yet another Squirrel's Nest. During his next upkeep, Dupuis cast Pernicious Deed rather than untapping the two tokens to attack with. He untapped some mana next turn as well, now able to reset the game in case Detora did cast some creatures.

Down to eight life points, Detora finally drew a useful spell – Fact or Fiction. Dupuis split Fire/Ice versus three lands and Rushing River – a third 4:1 split of the match, and the second very questionable split during the course of this game. Detora was happy to take Rushing River and the lands. In fact, she probably would have been happy to take just Rushing River. She cast River with kicker to take out both Elephant tokens – choosing that over the option of holding the bounce spell and using it to save Static Orb in response to Dupuis eventually activating the Deed. No matter – she drew another Orb on the following turn.

Detora summoned Wild Mongrel, finally causing Dupuis to use his Deed. Having Addled a few turns earlier, he was aware of a pair of Squirrel's Nests in her hand and used the Deed for two only – leaving the Orb/Opposition combo but also his Engineered Plague in play. Dupuis summoned Spiritmonger and Detora failed to draw a creature to tap it with over the course of the next two turns. An amazing comeback after a mulligan to five.

Game 3 began with only a minute left in the round. Dupuis was forced into yet another mulligan – this time he had only one land to work with. Both players were working fast, reluctant to end up with a draw.

Detora got some early beatdown going with a pair of Mongrels, but Dupuis had a Pernicious Deed ready. Even without it though, Detora could not deal enough damage as the game entered the five additional turns almost immediately after it started. The match ended up in a draw – a poor start for both players.