Round 1: Michael Gurney vs. Gary Krakower 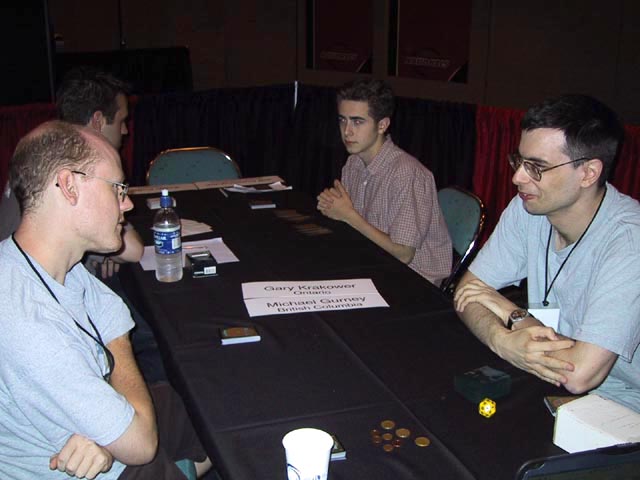 Michael Gurney placed fifth in this tournament last year, and had a Top 8 showing at Pro Tour Los Angeles, which used the Rochester Draft format. This certainly has to make him a contender to do well today. On the other hand, Canadian Nationals is practically Gary Krakower's tournament. He has won it twice, and placed in the finals once as well. His Pro Tour finishes have been less than stellar this past year, but history could repeat itself this weekend as Krakower looks to hold the National title a third time.

Gurney's deck is obscene. It contains Gerrard's Verdict, a pair of Terminates, Death Grasp and Captain's Maneuver. This is plenty of power for any player to do well with, but in the hands of someone who has the skill necessary to place Top 8 in a Limited Pro Tour, it's even better. Krakower's deck is nothing to sneeze at either. It has plenty of removal, including two Smoldering Tar, Ghitu Fire and Terminate. One aspect of this matchup that makes it unique is that both players have are armed with direct damage X-spells. This will make the games very interesting, as normally comfortable life totals will be reason for concern for both players.

Gurney played first, and the action started when he summoned a turn three Hooded Kavu. It was enchanted with Maniacal Rage, and attacked for four damage. Krakower untapped and played a fourth land, and still had not cast any spells. He decided to kill of the Kavu with Ghitu Fire on turn five, and commented, "Are you liking my red/green deck here?" He obviously needed a swamp, and was forced to discard a card on his next turn. He sent Marauding Knight to the graveyard, commenting that he wanted one of his ten swamps. Meanwhile, things weren't looking much better on Gurney's side of the table. Michael was in the opposite situation of what Gary was going through- he had plenty of lands, but no spells to cast.

As the game progressed, things got even more ridiculous. Turn after turn passed, with Krakower continuously discarding black cards, while Gurney played lands and had little else to do. A creature finally hit play when Gurney summoned Kavu Aggressor with kicker. Krakower used Magma Burst on end step to kill it off, but Gurney was ready with Captain's Maneuver, which kept the Aggressor alive and dealt damage to Krakower. However, Gary wasn't out of answers. He untapped and played Smoldering Tar. Which immediately took out the Aggressor.

Gurney had nothing to do on the next turn, and Krakower summoned Thunderscape Familiar followed by Bog Down with kicker, which left Gurney with only one card in hand. Smoldering Tar showed up on Gurney's side, and Krakower increased his army with Phyrexian Bloodstock. The Bloodstock was eliminated with Terminate, but Krakower continued the onslaught, summoning Volcano Imp, Gurney answered back with a less-than-impressive Rogue Kavu, and let out a mild laugh. Krakower attacked, and used Consume Strength to kill off the Kavu and deal two more damage in combat.

Even though Krakower was on the offensive, Gurney wasn't out of gas yet. He played Rakavolver with white kicker, and a Zombie Boa. Krakower killed off the Rakavolver with Death Mutation, and flew overhead with Volcanic Imp. The next turn saw Gurney played Gerrard's Verdict, which left Krakower with no cards in hand. He followed up by sacrificing Smoldering Tar to destroy Volcanic Imp. On the following turn, he played Pouncing Kavu with kicker, and attacked with it and Zombie Boa. Krakower thought for a bit, and took the damage. Gurney's next attack went better for Krakower, as he used Darigaaz's Charm to make Thunderscape Familiar bigger, which allowed it to block and kill Pouncing Kavu. Still, Gurney stayed ahead by summoning Ancient Kavu. Krakower eventually ran out of answers and chump blockers, and lost the game.

Krakower went first this time, and the first creature of the game showed up when Gurney played Kavu Aggressor. Gary then summoned Marauding Knight, which traded with the Aggressor when it attacked on Gurney's turn. A Trench Wurm then showed up on Michael's side, while Gary cast Smoldering Tar. The Wurm now went into the Red Zone, and was joined by its Hill Giant cousin, Ancient Kavu. Krakower untapped, and evened out the board by killing off the Wurm with Smoldering Tar, and summoning Duskwalker.

Gurney's Ancient Kavu came through for another three points of damage, and Krakower continued to build up his defense with Volcanic Imp. He used Terminate on Gurney's next attack step to take out the Kavu, and Gurney rebuilt his army with Slingshot Goblin. The next turn was vicious, as Krakower used Dead Ringers to take out both of Gurney's creatures. This left Michael practically helpless, and the Duskwalker and Volcano Imp attacked for a few turns until Gurney conceded.

Krakower started off with a second turn Kavu Jailer, which Gurney had to pick up and read. A Stun was cycled by Michael, who played his first creature in Trench Wurm on turn four. It was promptly eliminated with Smoldering Tar, while the Jailer continued to apply the beats. Zombie Boa was summoned by Gurney, which held down the Jailer. Krakower answered back with Volcano Imp, and Gurney attacked with the Boa, which was followed by Hooded Kavu. The Imp now attacked through the air, and Krakower increased the size of his aerial army with Phyrexian Slayer.

The race was now on, as Gurney gave Hooded Kavu Fear, and attacked with it and the Boa. Krakower's Slayer blocked and traded with the Kavu, and the Boa dealt three damage. Gary then untapped and attacked with Volcano Imp and the Jailer. The Imp fell to Terminate, and Krakower used Bog Down with kicker to leave Gurney with only one card in hand. This left Krakower in a good position, but he still had to deal with the Boa, which continued its attack. A Bloodstock showed up on Gary's side, but the Boa simply named black and attacked through Krakower's defense.

Still, Krakower was at least in a position to swing back. He attacked with the Bloodstock, which was chump blocked by Thunderscape Familiar. Smoldering Tar then showed up, and Gurney's troublesome Boa died to Terminate. A Rakavolver was killed off with Smoldering Tar, clearing the way for Krakower's attack.