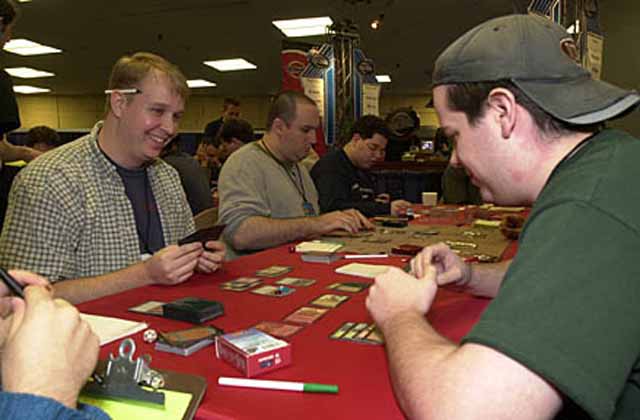 Scott played first and started quickly with a second turn Steadfast Guard. Mike was able to quickly stall the ground however as he cast an early Vine Trellis and Battle Rampart. Scott played out a Defender en-vec, and a Ramosian Commander to kick off his Rebel engine.

Mike was the first to take the offensive with a Snorting Gahr that is granted haste via his Battle Rampart. Scott cast Angelic Favor and uses the 4/4 token and the Guard to double block the incoming Gahr which forces Mike to use up a Seal of Strength in order to keep the Gahr alive. The following turn a Mike increased the pressure with a Living Terrain, but again Scott has an answer as he was able to double-block the 5/6 beast with his Commander and Defender and use Ramosian Rally to take out the Terrain. Scott used the Defender to keep the Commander alive, and with the ground still stalled by Mike's walls he elects to take his attack to the air with a Voice of Truth on his following turn.

Mike tried to continue his assault with a Pygmy Razorback and a Spur Grappler but Scott drew into a couple of 2/2s with which to block should Mike attack. A turn or two later Scott was able to Flameshot away Mike's Snorting Gahr and with two of Mike's best creatures taken care of his attack stalled little.

Scott eventually drew a sixth land and was able to start searching with his Commander. A Nightwind Glider joined the attack, and a Lieutenant was brought out to trade with the Razorback during an attack from Mike. Mike pressures Scott with a Laccolith Grunt and and starts getting him low on life. With Scott on six life and Mike on three, Mike against attacks with the Grunt. At this point Scott has a Defiant Falcon and the Voice of Truth and will kill Mike next turn unless Mike has a trick. Scott nevertheless elects to block the Grunt, obviously fearing Invigorate, and Mike uses it's ability to kill the Voice. Although a somewhat defensive decision it proves to be the correct one as Mike then uses a Flameshot to take out the lone Falcon and return the game to a neutral state.

It doesn't stay neutral for very long however. The very next turn Scott wheels a Charmed Griffin from the top of the deck, much to his and his teams delight. He shouted out loud, slammed the Griffin onto the table and even did a little dance. Completely out of answers and on only three life Mike succumbed to the Griffin's attack the next turn.

Scott had a number of sideboarding options and brought in two Orim's Cures and a Pious Warrior. He chose to leave an Inviobility in his sideboard though which is a little odd as it is very strong card against Red/Green. He perhaps felt it was too defensive in nature.

Mike got off to a reasonable start in game two with a third turn Silt Crawler. On his fourth turn he brought in a Giant Caterpillar but had only four Forests for his lands, leaving him unable to cast any of the red spells in his hand. Scott started well too with a Devout Witness and a Defender en Vec once again. As in the first game Scott was able to repeatedly double block Mike's incoming attacks and use the Defender and Orim's Cures to keep his blockers alive. Once Latulla, Keldon Overseer joined Scott's side of the board things start to look very shaky for Mike who still hadn't drawn a forest. Scott went to the air with a Charmed Griffin, using Latulla to take care of Mike's most threatening creatures. Mike finally drew into a Mountain but not before Scott had played out a Troubled Healer which pretty much sealed the game for him. With his red removal made ineffective by Scott's healer, and no answer to the Griffin Mike quickly got low on life. The final nail in Mike's coffin was a Kyren Negotiations from Scott that swiftly brought Mike to zero life.