Round 1: Mike Pustilnik vs. Kamiel Cornelissen 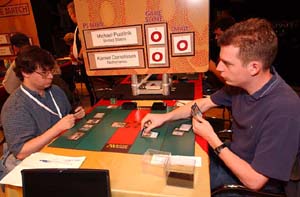 Last year, if you had asked any Pro Tour follower who the next big thing would be, they would answer Kamiel Cornelissen. With back-to-back Pro Tour finals appearances where he could have very well won, the young man from the Netherlands established himself as one of the Pro Tour elite. While he has done well this season, he has not had finishes equal to his accomplishments last year. With this event, Cornelissen has another opportunity to prove himself.

Ironically, Pustilnik and Cornelissen met in the finals of Pro Tour Los Angeles last year. This time with a World Championship on the line, they met in the first round. Pustilnik obviously thinks highly of his opponent, and told Kamiel before the match started that he chose him for his Fantasy Pro Tour Team.

Cornelissen started off strong with a pair of Nightscape Familiars, and Pustilnik Repulsed one. Cornelissen responded by tapping one mana, and playing a Repulse of his own so that he could draw the card. The Familiar was replayed, and Pustilnik built up his board with Psychatog. However, Cornelissen's Familiars gave him a significant advantage, as he played a two mana Fact or Fiction. He chose to take a two card pile of Flametongue Kavu and Fact or Fiction over Memory Lapse, Fire/Ice and a land. Cornelissen then untapped, and summoned the "FTK" for two mana. It hit play, and Pustilnik discarded Upheaval and Repulse to keep it alive. This put Cornelissen in position to attack with both of his Familiars, which would cause Pustilnik to discard a second card if he chose to block, since he only had one card in his graveyard. It did happen, and Pustilnik discarded Possessed Aven. This attack left Cornelissen tapped out, but Pustilnik had nothing to take advantage of the situation. 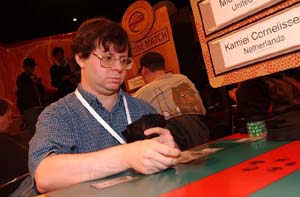 The Flametongue attacked past the Psychatog for four damage, and a second was summoned. This time, Pustilnik had Circular Logic, but the damage had been done. He was left with only one card in hand, and four cards in the graveyard. He untapped and summoned a Familiar of his own. Cornelissen responded with Fact or Fiction, but Pustilnik had another Circular Logic. This left the good doctor with no cards in hand. A third Flametongue killed off the Familiar, and Cornelissen's board eventually overwhelmed Pustilnik. 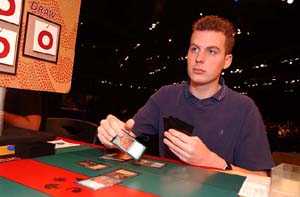 Pustilnik now went to work gaining some card advantage, as he played Probe with kicker. Cornelissen responded with Fact or Fiction, and Pustilnik added Circular Logic to the stack. As a response to that, Cornelissen played another Fact or Fiction. The piles were Circular Logic/Gainsay/Salt Marsh and Deep Analysis/Psychatog. Cornelissen took the two card pile and Probe now resolved, as Cornelissen discarded Deep Analysis and Upheaval. With Pustilnik tapped out Cornelissen cast Upheaval, and floated enough mana to replay scape Familiar, providing a huge advantage. This was followed by Psychatog, Pustilnik summoned scape Familiar, but it had to chump block the Psychatog. Cornelissen had Memory Lapse for Pustilnik's Psychatog, which cleared the way for his own 'Tog.