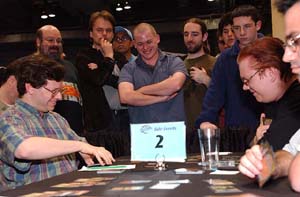 Everyone loves Mikey P but they also love Tomi Walamies. The onlookers seemed to fall along geographic lines as they chose which one of Magic's crowd favorites they wanted to urge on.

Both players kept their opening hands although Mike had only two lands—an Island and the Goblin Burrows. He drew another Island on the second turn and played a Riptide Biologist. Tomi threw down two forests and the stout Elvish Warrior—"Not a beast?" asked Mike with a smile. Mike didn't draw a mountain for many turns but he was able to play an Ascending Aven and start to thaw out his deck with Screaming Seahawk x 4. Mike was poking through for some damage but Tomi was able to keep it to a minimum with a Wellwisher gaining him two life each turn. Tomi threw down a Screeching Buzzard to slow down Mike's airforce and a Symbiotic Beast to fortify his ground troops. When the Buzzard and the Aven traded Mike had a decision to make. He was holding two Pinpoint Avalanche, a Screaming Seahawk, Lavamancer's Skills and an Island in his hand. Mike wanted to be able to play a Seahawk and a Lavamancer's Skills—if he ever drew a Mountain and ultimately decided to discard one of his impossibly far off Pinpoint Avalanches. Mike kept playing Seahawks and not drawing Mountain while Tomi hoped to hold them off with a Spitting Gourna.

The turn after Mike finally found his Mountain and gave his Biologist the Skills Tomi swung with his team; Barkhide Mauler, Spitting Gourna, Symbiotic Beast and Elvish Warrior. Mike bit and blocked everyone in a way that would kill almost all of both their guys. Tomi ruined that plan with a Tribal Unity for 5 naming beasts. Mike lost his whole team with the exception of the Biologist. Mike was able to Pinpoint Avalanche the Gourna on the next turn but it was all over when Tomi Smothered the pro-beasts wizard.

Both players stuck with their initial hands and Mike came roaring out of the gate with a Goblin Sledder. Mike's third turn wall took down Tomi's face down Gourna when it gained the Lavamancer's Skills. Tomi promptly Swatted the wall on his next turn. Mike was fine with swinging with the Sledder while Tomi seemed surprised that Mike had no play on the fifth turn. Mike was sitting on Discombobulate and used it on Tomi's Buzzard.

Mike played a Skirk Commando and set up the next few turns with a Mistform Wall and Lavamancer's Skills. Tomi clearly wanted to use Cruel Revival on the wall but realized that Mike could just make his Wall a zombie, as he was about to tap five mana. Without any way to kill the wall it was just a matter of time before Mike forced a third game.

Tomi played a turn three Wellwisher to get this game started. Mike had a secret Ascending Aven that revealed itself during Mike's next attack phase. Tomi started casting Barkhide Maulers on turn five and Mike answered with Screaming Seahawks. Three Seahawks could not hold off two Maulers and a Spitting Gourna and Mike never seemed to have the upper hand in the match. When Mike double blocked a mauler, Tomi had Primal Boost to cycle. Mike tried to slow things down with a Biologist but it was promptly Swatted. Mike cast a Taskmaster and Discombobulated it to see if he had any outs coming up.