Round 1: Neil Reeves vs. Eric Franz 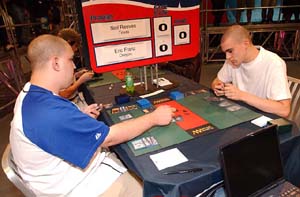 As soon as I sat down at the Feature Match table, Franz started joking about what he thought I'd write about him.

Franz- "Let me guess, you're going to write something like 'Eric Franz is out to prove that last year was not a fluke'?"

That being said, you can't help but ask...was last year a fluke? At Nationals in Orlando about 365 days ago, Eric Franz came seemingly out of nowhere to come one match away from a National Championship. A Finalist showing put him on the National Team, and the Americans put up what was quite possibly the most unbelievable comeback in Pro Tour history before coming one match short, losing to the Germans with the title on the line. After that event, Franz hasn't had much success on the Pro Tour circuit, and hasn't been qualified for a few either. It remains to be seen whether the perceived "fluke" label is getting to Franz, but even making the team once shows he does have a significant amount of talent.

Reeves- "I beat him in the first round of New Orleans, then we one-on-one drafted on the plane back twice, and I destroyed him both times."

Neil Reeves is running an Upheaval/Infestation deck designed by Zev Gurwitz, while Franz has mono-black Zombies.

Franz mulliganed down to six. After seeing Polluted Delta out of Reeves he played Cabal Therapy, naming Counterspell- Reeves had Smother, Zombie Infestation, Upheaval and Chainer's Edict along with lands. Reeves took his turn and played the Infestation, and Franz summoned Nantuko Shade. It died right away to Smother, and Franz played Withered Wretch, which died to Chainer's Edict. A second Nantuko Shade was Counterspelled, and Reeves played Compulsion to take further control of the game. Rotlung Reanimator was countered with a Circular Logic that went through Compulsion, and Deep Analysis gave Reeves even more answers. Concentrate made things as lopsided as they could get, and Franz played Corrupt to the dome for six, not seeming too happy about his situation. Reeves let it resolve, and kept filtering cards through Compulsion to make sure he had the exact hand he wanted. The inevitable Upheaval finished it. 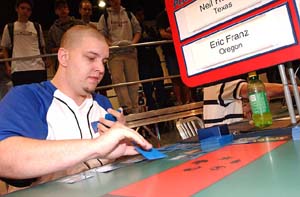 This time, Franz went first, so his second turn Shade resolved without a problem. It attacked for two damage, and Rotlung Reanimator was Counterspelled. Innocent Blood handled the Shade problem, and Graveborn Muse died to an Edict. Franz untapped and cast Persecute naming blue, getting Upheaval out of Reeves' hand. Persecute was also in there, and headed for Franz, stripping away his hand. However, Franz had played Unholy Grotto, and put Rotlung Reanimator on top of his library. Smother killed it, but Franz got a 2/2 out of the deal. Reeves went about the business of trying to find answers in time, playing and flashing back Deep Analysis. Withered Wretch and a Zombie token attacked to bring Reeves down to eight life points, and were joined by the Rotlung once again. Reeves played Compulsion, and went digging for an answer, with Upheaval being the best-case scenario. Indeed, he took his turn, and cast the reset button.

Franz- "You've got to be kidding me."

Franz rebuilt on turn two with the Wretch, The Rotlung was countered with Circular Logic, and the Wretch died to an Edict as Reeves began to stabilize. Cabal Therapy named Counterspell and missed, as Franz saw Cunning Wish, Innocent Blood and Future Sight. Franz summoned Rotlung Reanimator and ended his turn, as Compulsion would make flashing back Cabal Therapy less than optimal. A pair of Innocent Bloods took care of the Reanimator and the token it left behind, and Franz put the Rotlung back on top of his library, and back into play. Reeves cast Concentrate followed by Zombie Infestation, leaving him completely tapped out. Franz used the opportunity to play a second Rotlung, and attacked with the first. Reeves was at one and had to make a token and block, which killed the Rotlung but gave Franz two 2/2 creatures. This was an impossible situation to get out of without Upheaval, and Reeves didn't have it. 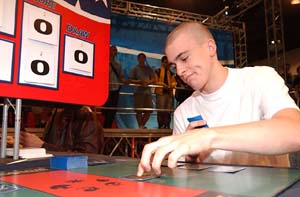 Franz's first turn Therapy got a Counterspell out of Reeves' hand, and Nantuko Shade a turn later flashed it back, getting two Chainer's Edicts. Hollow Specter was Smothered, and Reeves missed his fourth land drop. Graveborn Muse died to Chainer's Edict, and Franz kept the threats coming with yet another Muse. Reeves still had answers, playing Innocent Blood, and yet another Graveborn Muse died to Innocent Blood.

Franz- "This is so stupid, we're not doing anything"

Unholy Grotto got both Muses back into play with two turns, and Reeves was still stuck at three lands with only an Infestation in play. A few turns later, with Reeves in a horrible situation and Franz up plenty of cards, the match was over.