Round 1: Neil Reeves vs. Rob Dougherty

Two of the best players in America, let alone the world faced off in the first round of the Masters: Neil Reeves and Rob Dougherty. Reeves is from Arkansas, and is easy to spot at an event with his backwards hat, toothpick in his mouth, and unique Southern sarcastic humor. Dougherty is the founder of Your Move Games, and is looking to help his team continue their dominance in Constructed events. Both players came to Chicago with Psychatog decks, which can create quite a mentally draining mirror match for both competitors due to the untimed rounds. 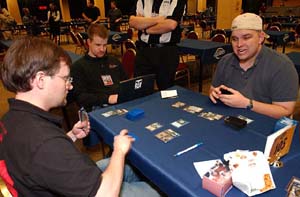 Reeves mulliganed his opening hand, noting, "It's a good start to the Masters! Mulliganing is not as much fun as you'd think. I mean I enjoy shuffling, but not in this context." Both players played islands and black sources of mana for the first few turns, signaling that they were both playing Psychatog. Neither player wanted to make the first move, and play was slow until Reeves tapped out for Deep Analysis, which was Counterspelled by Dougherty. Dougherty untapped, and played his own Deep Analysis. Reeves flashed his back to keep up in the card drawing race, and played Compulsion. Reeves used it to cycle through his spot removal cards, and countered Dougherty's Concentrate. Reeves rode his Compulsion to card quality advantage, and also used it to power his Circular Logics. This continued for a long time, with Reeves using Compulsion to get to relevant cards, and both players going back and forth with Deep Analysis to draw cards.

Eventually, Reeves used Cunning Wish to fetch Mana Short, but was still waiting for the right moment to go for the kill. Dougherty had his own Mana Short though, and used it on end step. A huge counterwar resulted, and the Mana Short did not resolve. Reeves played his on Dougherty's upkeep, and resolved. This cleared the way for Upheaval, followed by Psychatog.

Dougherty started with a first turn Duress, seeing Reeves' hand of three lands, Innocent Blood, Force Spike, Smother and Upheaval. Upheaval headed to the graveyard, and Dougherty tried to play Compulsion two turns later to get around Force Spike, but Reeves had drawn a Counterspell. Cunning Wish got Read the Runes for Reeves, and it was cast, improving card quality as he discarded spot removal spells. With Reeves tapped out, Dougherty was able to resolve Compulsion. Duress stripped Dougherty of a Counterspell, and Reeves drew some cards with Deep Analysis. With Compulsion in play it would seem that Dougherty would have the advantage, but he was stuck at three lands, which allowed Reeves to resolve his own Compulsion. Even Deep Analysis couldn't draw Dougherty into more lands, and he was quickly falling behind.

Duress stripped Circular Logic out of Dougherty's hand, and with eight lands in play to Dougherty's four, Reeves had a tremendous advantage in this permission mirror match. Reeves played Cunning Wish to get Opportunity, and played Duress, taking away Mana Short. A main phase Opportunity followed, and the phrase "from bad to worse" was never more appropriate. A last ditch effort Persecute was attempted by Dougherty, but Reeves was prepared with Counterspell. Reeves easily resolved a Psychatog, and shrugged off Smother with Circular Logic. Dougherty's own Psychatog was countered as well. This left Dougherty tapped out, and Reeves attacked for the win.