Round 1: Nicolai Herzog vs. Diego Ostrovich 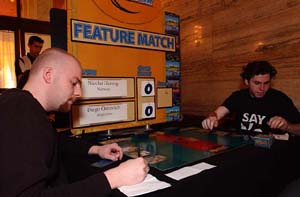 Round 1 of a constructed Pro Tour is always a fun one. All the players have put in months of work and everyone has their opinion on what's actually good in the new format. Everyone has their deck that they think can carry them to Sunday, but at the same time everyone wonders in the back of their mind if they might have missed something. Round one means all the preparations are over and the test is beginning.

The Onslaught Block Constructed format being used for Pro Tour Venice is quite a fun one. The blue cards are so terrible that everyone knows that whatever spells they put into their deck are going to resolve whenever they build up enough mana to play them. Because of that fact, a lot of players are playing a lot of crazily expensive cards (ranging from Akroma to Biorhythm to most of the "Pit Fighter Legends"). Meanwhile everyone knows the red-white Astral Slide/Lightning Rift deck is really good and so every other deck has been constructed with that deck in mind. Luckily, it's beatable if you want to beat it and early indications are that the resulting metagame includes a whole a bunch of viable decks, many of which are just plain cool.

Norway's Nicolai Herzog is running a black-red zombie beatdown deck. Many competitors concluded that beatdown decks just weren't viable because there were so many "Wrath of Gods" in the format. Red has both Starstorm and Slice and Dice while white adds in Akroma's Vengeance. However, since everyone knows there are so many wraths, it makes them a lot less powerful. In fact, the buzz the day before the Pro Tour was that all the control decks were backing off on their creature sweepers because their just weren't going to be very many weenie beatdown decks. Well, whenever that happens, it opens things up for the beatdown decks to sneak back into the mix and that's just what Herzog is hoping. German Dirk Baberowski is running a mono-red goblin deck for similar reasons.

Herzog's opponent in his round one feature match is Argentinian Diego Ostrovich. The South American star is fresh off a couple of good Grand Prix finishes. Those plus his success with his Extended elf deck (the one which abused Slate of Ancestry, among other thing) have gone a long way toward proving that his semi-final finish at Worlds was no fluke. For this event Ostrovich is running a red-green control deck (yes you read that correctly). He's got Lightning Rifts plus a bunch of cycling cards in order to deal with opponents' creatures and punish the Slide decks. He's also got large red and green beasts plus weenie sweepers like Starstorm. 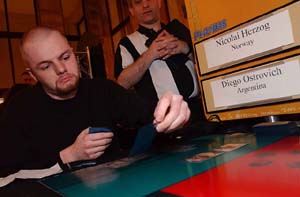 Both players took a mulligan before game 1 and then Herzog came out swinging as fast as he could: Withered Wretch, Withered Wretch, Bane of the Living, and an Embalmed Brawler (with no other zombies though) dealt the early beats. Ostrovich did nothing until the end of Herzog's fourth turn, when Ostrovich cycled a Krosan Tusker. He then dropped a Ravenous Baloth, which traded with the 4/3 Bane of the Living and gave Ostrovich four life, thus neutralizing the rest of Herzog's attack. After that, Ostrovich finally had the second red mana he needed for Starstorm and that that was the end of Herzog's beatdown.

Herzog played out his last monster – a Wretched Anurid – but Chain of Plasma dispatched it quickly. Herzog discarded a Smother to redirect the Chain back to Ostrovich and knock Ostrovich down to 3, but Herzog was completely out of gas. Ostrovich, meanwhile, was just getting started. Tephraderm followed Tephraderm and then a Lightning Rift came out too. One turn later Herzog was scooping up his cards, his zombies came up 3 points of damage short.

Game 2 started out similarly, with Herzog playing a turn 2 Withered Wretch and Ostrovich cycling a Tusker. However, this time Herzog was able to take advantage of the amplify ability of his Brawler, revealing two zombies to make it a 4/4. Herzog also had a Gempalm Polluter this time around and he his Unholy Grotto allowed him to keep getting it back. Ostrovich gummed up the ground war with a Broodhatch Nantuko, but that Polluter meant that Herzog didn't really need to deal damage by attacking. He cycled the Polluter for 3, put it on top with the Grotto, drew it again, and then cycled it into itself for the final points of damage. 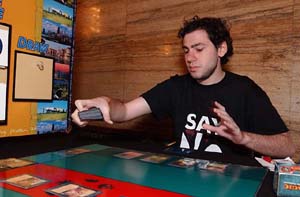 Herzog took his third mulligan in three games before the decided duel, and this was also the first duel where Ostrovich got to go first. Chain of Plasma knocked off Herzog's turn 3 Wretched Anurid and Herzog sent Visara to the yard just to knock Ostrovich down to 17. Things continued to go well for Ostrovich as he had plenty of time to cycle a Tusker and then play out a pair of Ravenous Baloths. Herzog did play Cover of Darkness, making all zombies fearsome, but all that did was turn Ostrovich's two Baloths into attackers. Cruel Revival dealt with one of the Baloths, but Contested Cliffs soon ended all of Herzog's hopes and Lightning Rift sped up the kill.

This was definitely not the matchup Herzog was hoping for when he put his zombie beatdown deck together. When the match ended he was complaining about all the mulligans he was forced to take and he didn't think the matchup was that bad for him, but it seemed to me that Herzog was in trouble the whole way. Ostrovich's deck should eat weenie decks alive, but it may have trouble with the even bigger green decks. Personally, I'm just looking forward to watching a Pro Tour where the green deck with four and five mana monsters is worried about running into the real fatty deck!