Round 1: Nicolai Herzog vs. Svend Geertsen 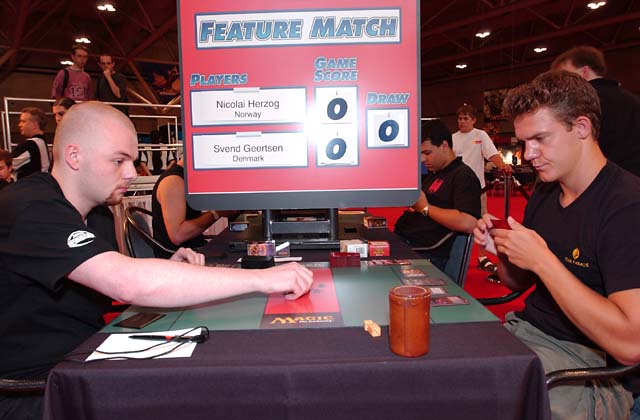 Two of the best players the continent of Europe has ever sent to the Pro Tour squared off in the first round. Svend Geertsen finished 3rd at Worlds in 1997 while Nicolai Herzog finished tied for 5th in '99. These two actually met three times during '99 Worlds, splitting their matches 1-1-1. Worlds '99 began a tough stretch of Magic for Geertsen. He was in contention for Top 8 with three rounds to go of six consecutive Pro Tours, but failed to make any Top 8's. After that, he took a break from Magic and went to Brazil to cool off. Now he's back on the Tour and just as talented as he ever was. Interestingly, Geertsen's hiatus included a decision not to attend the Magic Invitational which gave the coveted "top European" slot to Herzog, who was fresh off a win at the European Championships. Geertsen joked before the match that Nico still owes him dinner.

Both players kept mediocre hands for game 1 that each included one Duress and one other spell. Neither knew what the other was playing yet. They laughed as each player's Duress sent the other guy's only spell to his graveyard. They also realized they were settling down for a black-red mirror match, not a matchup either player expected to have to play. Herzog topdecked a Dark Ritual and a Crypt Angel, but Geertsen drew Urza's Rage and they were back in topdeck mode. Herzog then drew one of the most important spells in his deck - Plague Spitter. The Spitter absolutely destroys all the blue-green Spontaneous Generation-Opposition decks that have defined today's metagame. The Spitter is less impressive in the mirror, though, and Geertsen had no trouble dispatching it. 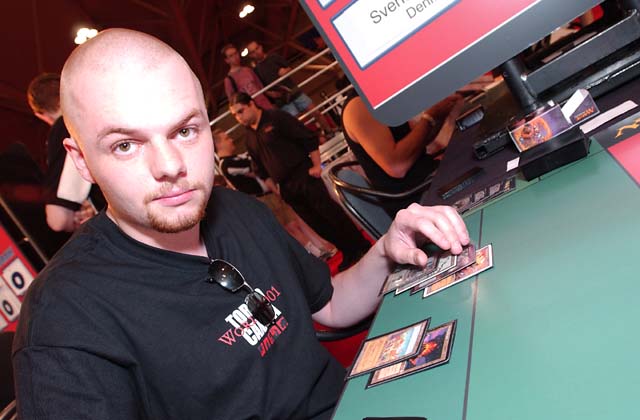 Neither player really had threats that the other couldn't deal with between all the discard and creature removal in the decks. Geertsen knew from a midgame Duress that Herzog had accumulated at least one Flametongue Kavu in his hand, so Geertsen didn't really want to play the Blazing Specter or the Crypt Angel that he drew. Herzog had no real options since all he could draw was removal. Eventually Herzog did draw a Blazing Specter, followed by a Skizzik. Geertsen had only one Vendetta in his hand, which couldn't deal with Blazing Specter since the Vendetta only hits nonblack creatures. Geertsen was thus forced to play Crypt Angel when he knew he was facing down Flametongue Kavu. "Worst I ever had," lamented Geertsen. As they were shuffling up for game 2, Herzog complimented Geertsen for deciding to run Crypt Angels: "they are amazing." 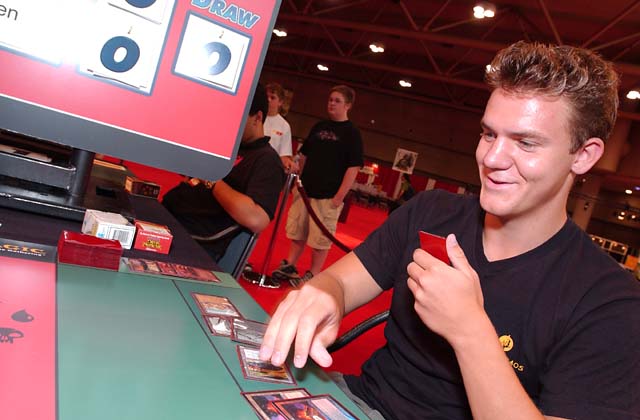 After game 2, Herzog got to experience the horrible feeling of seeing the judge walking toward him with a decklist in hand. Herzog forgot to put down Rishadan Ports on his decklist, registering a 56-card deck. He received a match loss for the first round for having an illegal deck, and the official policy when you register too few cards is that you are allowed to keep playing in the tournament if you fill out your decklist with basic lands. So Herzog won't get to use Ports all day. Geertsen wished him luck, and told him he had a good deck and could win with it anyway. Geertsen also seemed genuine when he said that he would rather have played out the games than win this way.