Round 1: Noah Barnett vs. Steven Gutierrez 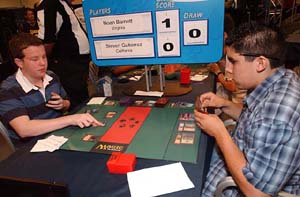 Noah won a qualifier in Charlottesville, VA. He's been playing Magic for a little over a year, having started with Judgment. He brings a mono-black Zombies build to this tournament. Steven placed second in a JSS Challenge Qualifier in Costa Mesa, CA. Steven started playing shortly after the release of Invasion. He decided to go with three-color Mirari's Wake for this event, probably one of the most skill intensive decks to play in this format.

The players agreed to go with the high roller to determine the start, and Noah won the roll. "I'll keep," Noah said after taking a quick look at his cards. Steven was not as happy with his opening hand, and the seven cards headed back into the library. A mulligan is a lousy way to start your day. When six cards came off the top of Steven's library he was a little happier with those.

Noah leads with a Swamp, Steven with a Forest. At this stage of the game nobody had learned anything about what the other person is playing. A turn two Nantuko Shade from Noah was the first creature on the table, and when Steven played no creatures the Shade swung for five. At the end of the turn Steven cycled a Renewed Faith, putting his life total at fifteen and showing either Wake or Slide.

The Nantuko Shade swung again though, this time dealing six damage to Steven, sending him to 10. On his turn he gave us a morph creature, which was revealed to be an Exalted Angel when he chumped with it a turn later. "You're at 10?" Noah asked, contemplating his next attack phase. The Nantuko Shade got pushed into the Red Zone, where it was met by another morph creature. A second face down Exalted Angel went to the yard.

"That's game," Steven said as he scoops up his cards. Having never found a fourth land he couldn't cast any of the three Wraths he was holding.

Game 2
The sideboarding started immediately after Steven packed up his cards following Game 1. Sideboarding on his side appeared to be a pre-made decision. Mono-black has been all over Nationals, and Steven seems to have made his sideboarding decisions before this event even began. 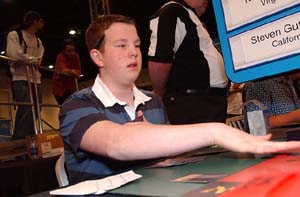 Steven pulled Mirari and Compulsion out of his deck, adding in two copies of Chastise.

For Noah the sideboarding decision took a little longer, and was much more excessive. Four copies of Smother, three Mutilates and two Shambling Swarms left the deck, replaced by four copies of Braids, four copies of Duress and a single Haunting Echoes.

The players were silent as they shuffled up for Game 2. The banter that people are used to seeing in the pro game just isn't here for these kids yet. Playing in the most important tournament of their young careers these two young men are all business. They exchange no words between games, and seem intent upon the shuffling of their decks.

"I'm gonna play," Steven said while both players shuffled up for Game 2. It was the only thing they said while shuffling. Noah made the decision to keep, but seemed unhappy with his hand. He shook his head a little after he drew a card for his turn, but he could have been bluffing. A turn two Withered Wretch was the first creature on the table, and when he was cast Steven responded by cycling a Renewed Faith. A turn later Noah cast a second Withered Wretch, and Steven responded to that one by sacrificing his Krosan Verge.

Steven's mana base appeared to be developing much better, but he still had nothing standing between him and the two Wretches. "Sixteen," Steven said as he changed his life total. The Wretches did their swinging thing again.

"I'll flash it back," Noah announced, sending a Withered Wretch to his graveyard and using the Therapy flashback. Steven tapped an island and a plains, "Memory Lapse," he said.

Noah adds a Graveborn Muse to the table, and things appeared to be going his way. An Oversold Cemetery is also added to the table, but it was useless at this point. The real problem for Steven was that Noah was drawing two cards a turn from the Muse and then getting another one from his draw step. When Wake gets outdrawn by mono-black, it tends to lose. 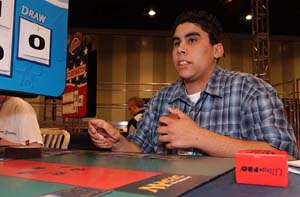 "Cabal Therapy," Noah announced. It was greeted with a Counterspell from Steven though. "Sacrifice him," Noah announces, holding his Withered Wretch in the air. "I'll name Chastise," he finished.

The Chastise was in Steven's hand when the first Cabal Therapy was cast, so Noah knew he had a hit there. Steven turned his hand over revealing Chastise, Forest and Krosan Verge. Things appeared to be over.

"Attack," Noah said as he pushed his Graveborn Muse into the Red Zone. Following his attack phase he tried to put a Withered Wretch on the table, but Steven had the Memory Lapse. Life totals were vastly in Noah's favor, sixteen to five right now. The Graveborn Muse was swinging for three each turn and providing Noah with some extra card drawing. On his turn the Muse swung again and Steven changed the life total on his side to two.

"Deep Analysis targeting myself," Steven said on his turn. He didn't draw a Wrath of God, and if he wasn't holding an answer then the game was over. "Chastise," Steven announced after seeing the Graveborn Muse pushed into the Red Zone again. This brought Steven back to five life, and cleared the table of its only creature. "Put eight mana in my pool," Noah announced. He tapped two Swamps and his Cabal Coffers. "Use six of it to play Visara," he finished.

There was a disgusted chuckle out of Steven, but that's all he could manage. Noah then used his Withered Wretch to remove the card drawing from Steven's graveyard. Steven went to his turn, drawing nothing that would save him from Visara and the Withered Wretch next turn, then offered his hand to Noah.