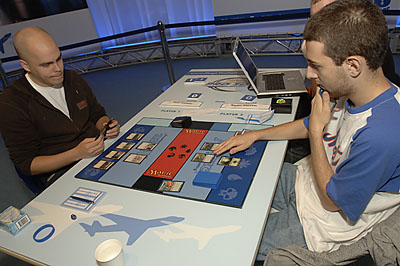 Hovi is fresh off a Top 32 appearance in Athens, one that was not good enough to qualify him for the next Pro Tour. Thankfully he's got that whole Hall of Fame thing on his side, allowing him to attend whatever effin' Pro Tour he wants. When asked what he's been up to recently in terms of work, he shrugged noncommittally. Apparently he got in some solid practice before Athens, though, and is looking to continue his run back to the top of the game. Sitting across the table from the Hall of Famer is teenager Steve Sadin. Sadin is a regular StarCityGames.com columnist and a sometime intern for Brian David-Marshall in New York City. Sadin has never made it big in Magic, but he's hoping to take his shot here in Kobe.

Sadin suspended a turn 1 Durkwood Baloth, and they were off. Turn 2 gave Sadin a Spinneret Sliver, while Hovi answered with Errant Doomsayers and then Amrou Scouts a turn later. Sadin flashed an Ashcoat Bear onto the board at the end of Hovi's turn. The Doomsayers were keeping down one of Sadin's bears while the other was getting in for two a turn, but they would soon have to compete with Hovi's Rebel chain. Might Sliver made that a much more interesting contest, as did the unsuspended Baloth.

Gaze of Justice removed one Might Sliver from play, but Sadin reloaded with another while Hovi had his pants down - and bashed for 11, dropping Hovi to 3. The apparently mono-White weenies summoned forth further members to try and overwhelm Sadin with force, but Strength in Numbers on the Baloth finished game 1. 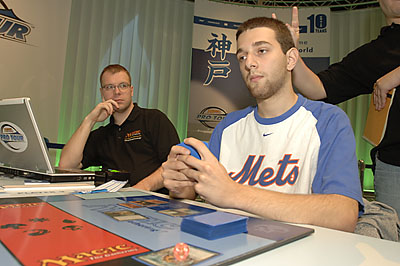 Sadin led off game 2 in exactly the same fashion as game 1 (suspending a Baloth), while Hovi started a bit faster, tossing Knight of the Holy Nimbus onto the board and getting a beat in. A turn later, Hovi suspended Riftwing Cloudskate, revealing that he was, in fact, playing a second color, while Sadin cast Yavimaya Dryad and tutored up an extra Forest from his deck. A pair of Might Slivers for Sadin again made for an imposing force, but the Knight proved an able blocker for one, and Cloudskate returned the second to Sadin's hand when it hit play. This let Hovi go aggressive, with Evangelize stealing Might Sliver as well, earning a fifteen-yard penalty for piling on. Sadin used Lightning Axe to kill his own Sliver, with another Might and Durkwood Baloth on the board.

Gaze of Justice removed Sadin's second Might Sliver, but incredibly he had a third, giving him at least a chance in what appeared to be an unwinnable race (Hovi had added a Duskrider Peregrine to the board as well). No further useful spells from the top of Sadin's deck left him shuffling up for game 3, with a lament that he could have won the game if he had played differently.

Sadin Parised to start game 3 but kept the six-card hand, while Hovi opened with Benalish Cavalry. Zealot il-Vec threatened to kill Sadin's Two-Headed Sliver, but Conflagrate killed the Zealot, only to see a second Zealot step forward from Hovi's rear guard. Sadin just flashed back the Conflagrate in his graveyard, trading a Strength in Numbers for a second kill. Hovi one-upped him there, casting a pair of Amrou Scouts this time, while Sadin tried to maintain parity with Might Sliver. 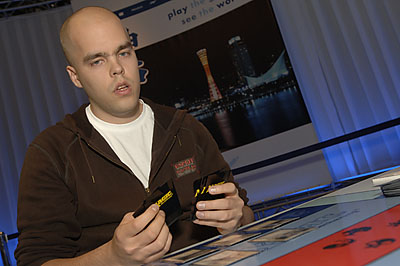 Hovi had to pass the turn back to Sadin with no action, giving Steve a chance to get dirty by adding Bonesplitter Sliver to the board as well, sending only Two-Head into the red zone. Hovi searched up Outrider en-Kor and doubleblocked with a Scout and the Outrider. The game then paused for a judge call about en-Kor damage and whether it is redirected as single events or whether it happens all at one time. The Head Judge then upheld the ruling that it occurs at the same time when the combat damage resolved, leaving Hovi trading just his Scout for the Two-Headed Sliver. Evangelize put Hovi way ahead on the board, stealing Bonesplitter Sliver from Sadin, but Sadin came right back, emptying his hand of Spinneret Sliver and a suspended Nantuko Shaman.