When the pairings went up for the first round, Osyp was in disbelief. He checked once more, and sure enough he had to face CMU/Togit teammate Eugene Harvey. Lebedowicz is fresh off a victory at Pro Tour Venice, which was his second Sunday appearance in a Constructed Pro Tour. This is the last Masters ever, but it's also Constructed, which means Osyp should have a good shot at doing well. With the CMU/Togit powerhouse behind him, he came to Yokohama with Tinker, while Harvey is running Psychatog. 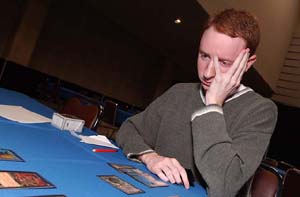 A second Mana Leak was countered with Lebedowicz's Leak, allowing the artifact to resolve. Harvey tapped all his mana on upkeep, drew, and cast Fact or Fiction. The piles presented were Polluted Delta/island/swamp and Psychatog/Duress; Harvey took the two card pile. He then played a swamp and used the Duress, seeing Mana Leak and Crumbling Sanctuary, sending the counterspell to the graveyard. Without much else to do, Lebedowicz played Crumbling Sanctuary, and Rishadan Port. He would need to draw a threat soon while the Tangle Wire was still holding down Harvey's lands.

Once again, Harvey tapped his lands on upkeep and cast Fact or Fiction. The piles presented were Counterspell/Intuition and Psychatog/Counterspell/island; Harvey took the two card pile. Eventually the Tangle Wire faded away, and Harvey used Intuition to get three Accumulated Knowledge. This put him up four cards, and gave him even more control over the game. At this point, Lebedowicz had to go for it.

He used Port on his turn to tap down one of Harvey's lands. Tangle Wire was Counterspelled, leaving Harvey with one blue mana untapped. This gave Phyrexian Processor a good chance to resolve, but Harvey played Brainstorm in response, followed by Thwart. Harvey summoned a very threatening Psychatog which allowed Phyrexian Processor to resolve, but Harvey simply used Cunning Wish to get Capsize, bounce the Sanctuary, and attack for the win.

Harvey tapped his mana on upkeep, and used Cunning Wish to get Fact or Fiction. Phyrexian Processor resolved easily, and Osyp set it to 10/10. Harvey added a counter to Powder Keg to bring it to two, and played a second Keg. Under Tangle Wire he played Fact or Fiction on upkeep again getting Mana Leak and Duress.

A token was made, and attacked for ten. Harvey took the damage, and would be able to kill all tokens and the Processor at once next turn with both Kegs. Lebedowicz tapped Ancient Tomb and went to take cards off his library, until he realized he didn't have Crumbling Sanctuary in play; that was last game. This got him a warning.

He tapped all his resources and cast Upheaval, playing Grim Monolith, Voltaic Key, Thran Dynamo and the Processor, this time on five. Duress revealed lands, Mana Leak and Tangle Wire, and Harvey sent Tangle Wire to the graveyard. Lebedowicz played Rishadan Port, and on upkeep tapped mana to activate the Port on Harvey's land and make a 5/5. He had Mana Leak to stop Powder Keg on the following turn, and forced a third game.

With three Ports in play, Lebedowicz would be in a good position to force spells through when he got the mana. Harvey played Accumulated Knowledge to draw four cards, and summoned Psychatog. This left him tapped out, and Lebedowicz played Urza's Blueprints. Harvey fed a Knowledge to his Psychatog, used Cunning Wish to get it back, and was able to fuel his Psychatog to lethal damage.