Round 1: Panzer Hunter vs. Your Move Games 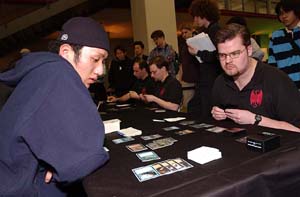 Team Your Move Games have been around forever. Composed of Darwin Kastle, Dave Humpherys and Rob Dougherty, they were the champions of the first Team Pro Tour. Never mind that they're all strong players in their own right. Their opponents in this single elimination match are no slouches, either. They are Panzer Hunters, the finalists at the Tokyo Masters. Kazuyuki Momose had even retired from the game shortly after their monster run, but he came back to fight once more alongside the impetuous Reiji Ando and the quiet mastermind, Itaru Ishida.

Kastle started under fire from Ando's Aquamoeba and Dirty Wererat, working Compulsion to get things going. He drew into Sadistic Hypnotist, and sacrificed it and Frightcrawler to empty Ando's hand. Ando ripped Skywing Aven and continued the beats.

Though Momose lost his Overrun to an unlucky Minotaur Explorer, he was using it and Ember Beast to hammer Dougherty. Dougherty put a stop to that with a Nantuko Cultivator that hit play as a 5/5. Next to them, Ishida had Skywing Aven and Hallowed Healer to Humpherys's Aven Fisher. Kastle dropped to six, but his Compulsion had dug him through to Stalking Bloodsucker.

Dougherty's Cultivator bought him lots of time, as Momose had run out of gas. Doughtery dropped Springing Tiger, and then suddenly Demoralized, responding with Rites of Initiation for three, putting him to threshold. Momose did a double-take, then scooped.

Humphery's was taking it slow, but needed an answer to Ishida's now two fliers. He was content to mill away land and make a Mystic Zealot, working his way towards threshold. Kastle had fallen to four by this point, but his position seemed quite stable. Ando undid that with Screams of the Damned. Kastle attacked, leaving Gravedigger behind, in the way of Aquamoeba. Ando untapped, Screamed twice, attacked to leave Kastle at one, then threw down his topdecked sixth land to Scream for the win.

Dougherty got in some early beats thanks to Millikin's accelerating Acorn Harvest. He lessened the impact of Elephant Ambush with Firebolt, then reused it to take out Nantuko Disciple. Humphery was meantime still struggling against Ishida. He had to rescue his Zealot from Waste Away with Aether Burst, only to see it stopped with Kirtar's Desire.

Game 2 was going Kastle's way. He had an early Dreamwinder backed by Patriarch's Desire and Chainer's Edict to remove blockers. All that good feeling seemed to save Dougherty's flagging draws. He ripped Cultivator, then milled Roar of the Wurm. Unsurprisingly, those two gave him YMG's first match win. 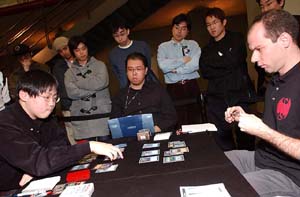 Ishida stepped on whatever hope Humpherys had left for the first game with Psionic Gift on a Mesmeric Fiend. That dispatched Cephalid Scout just before Aboshan made his appearance. By then he was too late.

Aboshan was also coming to the rescue for Ando, though more effectively. Kastle was at threshold, and his Torturer had already ripped through two Soul Scourges and a Zombie Assassin. Ando was at eight. Stalking Bloodsucker was not enough to get around the Cephalid Legend. Ando tapped low for Screams of the Damned, and surprised no-one with Moment's Peace to stay alive.

Humpherys's second game was a slow-motion disaster. He stalled at three land behind an Angelic Wall that held off Ishida's Patrol Hound. Psionic Gift softened the blow. He had a Liquify for Mystic Crusader, but couldn't find a fourth land. Ishida meanwhile dropped Mystic Zealot to start serving. Hump's deck went for comedy, offering up Mystic Visionary. When he did hit four land, Humpherys was already at twelve. He used Churning Eddy to slow things down and dispatch the Psionic Gift. Ishida's Mesmeric Fiend stripped his Teroh's Faithful.

Ando had to let himself fall to three, but he had good justification. He needed to cast a second creature to make sure his Aboshan would survive Kastle's Edict on the second go-round. He went on to stabilise the board behind the monster legend, but all good things must come to an end. Kastle drew Faceless Butcher. And just as Kastle evened his match to one game apiece, Humpherys fell to Ishida's fliers a second time, evening it at one match apiece. 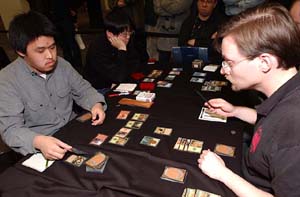 So it came down to one game. Things were not looking good for Ando, who started with Aquamoeba, then had nothing else before turn five. Kastle had meanwhile made Compulsion and Dreamwinder. Ando spent his fifth turn on Concentrate, then pitched to his Aquamoeba to Demise the Dreamwinder.

He continued to turn things his way with Crippling Fatigue on Cabal Torturer and Skywing Aven for more effective smashery. Kastle calmly tapped six and laid down Stalking Bloodsucker. Languishing in his hand were Persuasion and Faceless Butcher. To say it looked good was an understatement.

Ando fought gamely. First Narcissism, then Screams of the Damned. Still, Kastle had the Bloodsucker. That was enough.

Kastle Firebolted the Aven to get it out of the way. Ando rescued by pitching an island. Kastle swung. Then, for some reason, chose to Churning Eddy away Aquamoeba and Bog Wreckage. That left him without enough mana to pump the Bloodsucker. He could have played a land, but chose to keep it in hand for Compulsion.

Ando untapped, double-checked the situation, then Fatigued the Bloodsucker and activated Screams twice. The Bloodsucker went to the graveyard. Since Kastle's hand was full of reactive cards, he did nothing on his turn but cycle with Compulsion.

Ando dropped his Aven and Aquamoeba. He chose not to rescue when Kastle Butchered the Aven, instead untapping and Screaming it away. He even used Narcissism to pump his Aquamoeba so it would survive. His attack left Kastle at three. On his next turn, he played Soul Scourge to win the match.