Round 1: Patrick Mello vs. Kai Budde 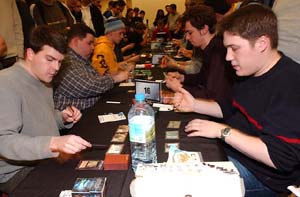 Hello from the first round of the big money competition in San Diego! The Gateway for the Masters had ended, leading straight into the first two rounds of play in the Masters itself for San Diego. The format: Type 2. The grand prize: $25,000. I'm Ben Bleiweiss, Magic history guru for Magicthegathering.com, and I'm here to tell you about the amazing match that took place just moments ago between two of the greatest German players in the game.

Kai Budde and Patrick Mello, longtime friends, sat down with identical U/B Psychatog decks. Each deck featured a slew of counter magic (including Force Spike, Counterspell, Memory Lapse, and Undermine) combined with card drawing (Opt, Fact or Fiction, Probe) and discard effects (Duress, the aforementioned Probe, and Recoil). All of this card drawing and discarding focused on getting a Psychatog into play with enough cards in the graveyard and hand to pump it from a one power creature into a singularly huge 20 power colossus.

Kai commented before the match that some spectators might find this particular mirror match a little boring. And admittedly, a meeting between two control decks such as these might not provide the thrills that come from attacking with a horde of rampaging creatures. But if you pay the price of admission, you are treated to some of the most interesting card interactions that this game of Magic: The Gathering has to offer.

For instance, take the first game. On the third turn, each player had only played lands, when Patrick cast a Duress targeting Kai. This revealed a Force Spike, Undermine, Swamp, Opt, Psychatog, and two Fact or Fictions. Immediately, Patrick's Magic skill came to test. Which card should he remove from Kai's hand? He couldn't choose the land or the creature, so those were immediately discounted as victims. If he took the Undermine, he could have the opportunity to cast almost any spell from his hand unopposed the following turn. Taking the Opt would potentially keep Kai from searching for more land to power his hand. In the end, though, Patrick made the correct choice, and took out one of the Fact or Fictions. This powerful card would have allowed Kai to put even more cards into his hand in the long run, in addition to being able to benefit his Psychatog via the cards that could be put in his graveyard.

So both players continued playing lands, until the 8th turn of the game. Kai had failed to draw a land that turn, and faced a hand with 8 cards. He still carried the Psychatog that Patrick saw earlier with the Duress. Instead of summoning the Atog, he chose to discard a Force Spike. Even though he was giving up the chance to cast a spell, he knew that tapping three mana to cast a spell at that point in the game might be fighting a losing battle, since Patrick would surely be able to Counterspell his Psychatog and return fire with something potentially even nastier.

Play continued in this fashion, with both players alternately playing land or discarding the worse cards in their hand upon reaching beyond the maximum hand size. At the end of Kai's 12th turn, Patrick attempted to cast Fact or Fiction. Kai targeted the FoF with an Undermine, which in turn was targeted with a Counterspell. The Counterspell was then Memory Lapsed, and the Memory Lapse was in turn Memory Lapsed. The stack at this point appeared as follows:

Kai still had another Memory Lapse in his hand, but decided that he didn't want Patrick to get a Memory Lapse of his own back, since Kai wanted to advance through his deck at the highest possible rate and try to find more land. So he added his Memory Lapse to the stack, but targeted Patrick's original Counterspell.

After a quick break to eat some candy treats from Germany, both players resumed the match. Such a battle between two great minds of Magic needed a brief respite from all this stackery! But back into the breach went they, and Patrick cast Probe with kicker, Fact or Fiction, and a second Probe with kicker on three following turns, creating such a sizable card advantage that when he finally played a Psychatog of his own on the 17th turn, Kai could do nothing but concede.

Ok, hold up a second. "Ben,", you might ask, "what was even remotely interesting about that last game? Patrick and Kai both drew a bunch of cards, discarded when they could have been casting spells, and the game ended with both players at 20 life with only one non-land permanent in play!" This match exemplified the 'mental' game in Magic. Consider what each player considered each turn:

How many cards do we each have in hand?
How many cards are in each graveyard?
How many copies of each card are left in both decks?
Can I cast a spell safely without it getting counterspelled?
Even if I cast the spell, will I be able to answer a threat with my mana tapped?
How do I split Fact or Fiction piles to minimize the advantage to my opponent?
Which Counterspell should I use at which time?
What could my opponent have in their hand to answer my threats?
Which card should I take from my opponent's hand with a Duress?

These questions become compounded when you realize both these players brought the same exact deck, of which they displayed a flawless knowledge in play execution. Since they know how to play their deck, how to play the other deck, and what to expect in almost any situation, it truly becomes as masterful a mind game as any chess match ever known, with each card becoming an integral piece of a puzzle, each move an attempt to make the opponent flinch first.

Fast forward this game to turn 11. Both players played lands, and neither had yet achieved significant advantage. Kai cast a Duress, revealing Patrick's hand of 3 Counterspells, 2 Undermines, and a Probe. Kai decided this was a good time for another brief candy break, since he faced an almost impenetrable wall of counter magic against his goal of getting a Psychatog into play. He chose the Probe for Patrick to discard (since the Probe was the only card which would afford true card advantage at this point), and play continued without much incident until turn 15.

On turn 17, Kai stood with only 2 cards in hand, while Patrick held 4. Kai attempted to cast a Fact or Fiction, which was responded to with an Undermine. In response, Kai cast the last card in his hand, a second Fact or Fiction. Patrick's remaining cards were not counterspells, so the 2nd FoF resolved, revealing these cards: Swamp, Underground River, Memory Lapse, Psychatog, and Counterspell. Patrick split them as follows:

Kai chose the second pile, and used the Counterspell on Patrick's Undermine, allowing his original Fact or Fiction to resolve. This time, the cards revealed were 4 lands and a 3rd Fact or Fiction. The lands were put in one pile, and the spell in the other. Kai chose the larger stack, since he had a Cephalid Coliseum on board, and could use the excess lands to cycle through his deck more safely.