Round 1: Permanents to Pachyderms

2010 was a big year for Adam Yurchik. After losing the finals of GP Oakland to champion Matt Nass, he bounced right back and took his first major event win at Grand Prix Houston just two months later. Now in 2011 he's pushing himself to even greater heights, with a Top 16 at Pro Tour Paris and a Top 32 at Pro Tour Nagoya. He's hoping this weekend will bring him his first PT Top 8. 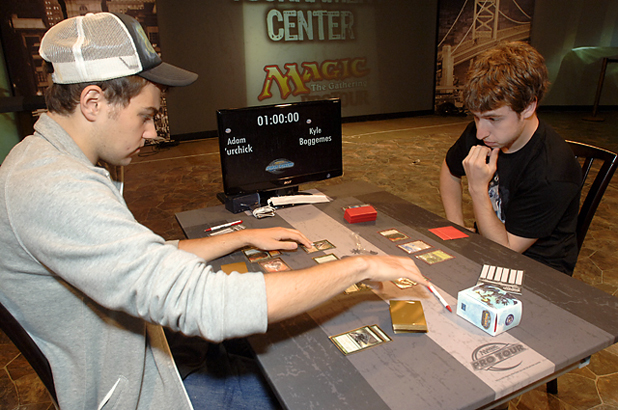 Kyle Boggemes also jumped into the spotlight in 2010, with a finals appearance at Pro Tour San Diego. In a recent column on ChannelFireball.com, Boggemes provided an overview of the Twelvepost deck that's been tearing up Modern on Magic Online, and he's put his money where his mouth is this weekend with a mono-green version of the deck. Yurchick is also banking on the power of the Loci, but his version touches red, in part for the very exciting Through the Breach, a card that leads to some unfortunate Emrakul, the Aeons Torn surprises.

Things did not start well for Boggemes. He started with a mulligan and didn't stop until he had just four cards in hand. They fought over mana early, Yurchick taking out an Overgrown Battlement with Beast Within, then using a second on a Cloudpost. Boggemes swung with his Beasts, but Yurchick threw up a defense of Wall of Roots and Overgrown Battlement.

Boggemes was out of action, and Yurchick took the reins. First came Primeval Titan for Cloudpost and Eye of Ugin. Boggemes had a Beast Within for that, but no ready answer for Ulamog, the Infinite Gyre, who came down next. He tapped out for Mindslaver, but Yurchick put the final nail in the coffin with a Green Sun's Zenith for Terastodon, turning all his important permanents into pachyderms.

This time Boggemes got to play with a full grip, and kicked off with Green Sun's Zenith for Dryad Arbor. Yurchick played a Cloudpost. Boggemes hit for 1 and played an Overgrown Battlement. Glimmerpost from Yurchick gave him three mana, enough for a pair of Gruul Signets. Boggemes played a Cloudpost and a Wall of Roots, then went for Beast Within on Cloudpost in Yurchick's upkeep. Yurchick did the same. 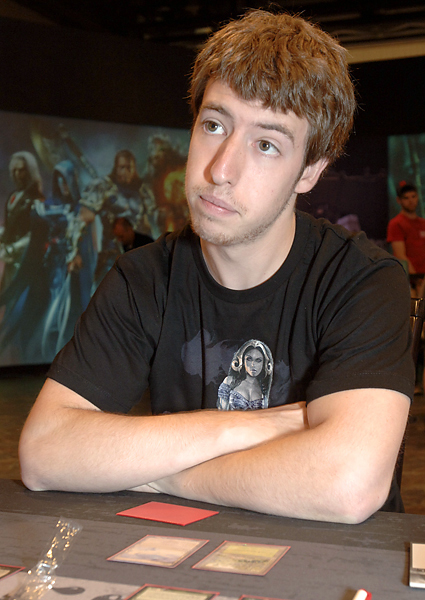 That all you got?

Unfortunately, he was behind on mana. He played an Overgrown Battlement and passed. Boggemes set him even farther back with Plow Under. While Yurchick replayed his land, Boggemes played Primeval Titan, getting Cloudpost and Ghost Quarter. It turned out to be just in time, because Yurchick had Through the Breach for Emrakul, the Aeons Torn! Boggemes sacrificed down to just a Battlement and the Titan.

The Titan started swinging and quickly rebuilt Boggemes's mana, while Yurchick floundered. Another Plow Under put him further back, and the Titan got Ghost Quarter just to be sure. A few attacks, and it was on to game three.

"Alright, so... your turn to mull to four? Is that how this goes?" asked Boggemes.

Both players found their openers acceptable. They played out matching Cloudposts, giving Yurchick three mana on his second turn, enabling a Green Sun's Zenith for Overgrown Battlement. Boggemes found a Beast Within the Cloudpost on Yurchick's upkeep, and Yurchick played out a second Battlement and a Vesuva-Cloudpost. Boggemes untapped and went into the tank. 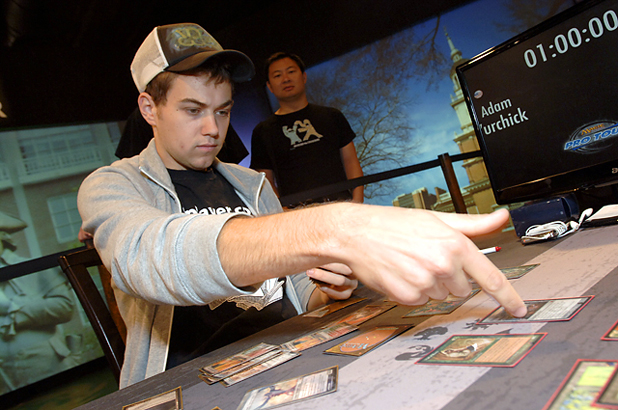 Yurchick unleashes the Beast Within.

Just then PT Veteran Antonino De Rosa strolled up. "Let's see what these two masters are playing!" He took one look at the board, and shook his head, exclaiming "Mirror match! Jeez." He immediately turned on his heel and left.

Boggemes emerged from thought and played out a Cloudpost, giving him four mana from two lands, enough to play Reap and Sow on Yurchick's Vesuva, leaving him with his Battlements and a Horizon Canopy. Yurchick wasn't pinched for mana, though. He tapped one of his Battlements for a third, then tapped the other for a Green Sun's Zenith, fetching the fourth. Five permanents that could give seventeen mana.

All Boggemes could do was play Glimmerpost, Wall of Roots, and a Battlement of his own. Yurchick put his mana to good use: first a Terastodon to blow up Boggemes's mana, then a Green Sun's Zenith for Primeval Titan, who got out Cloudpost and Eye of Ugin. Boggemes drew, double-checked his options, and conceded.

4 Beast Within 4 Through the Breach

4 Through the Breach 3 Punishing Fire