Everyone wants an easy matchup their first round, but someone's got to play Phoenix Foundation. This time the burden fell on the shoulders of 2020 in a rematch of last year's finals. The Canadians swore that this time things would be different. After all, they'd since made the finals of the Venice Masters, showing their first performance was no fluke. 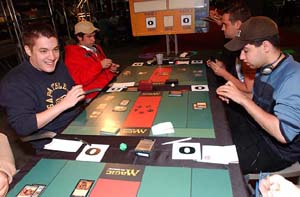 The first match off the blocks was Dirk Baberowski against Elijah Pollock. Pollock's red-black deck blazed out of the gates with Carrion Feeder and Festering Goblin leading a charge of morphs, but Baberowski shut him down with a mighty three-turn sequence. First it was turning up Wall of Deceit to ambush the 2/2 Feeder, then Crude Rampart, and finally Noble Templar. With the ground locked up, Baberowski's blue-white looked like it would have no trouble winning.

Next door, Kai Budde and David Rood were in a race. Budde had Wirewood Elf and Wirewood Savage, threats that Rood's blue-white couldn't answer.

Rood kept pace with a string of fliers, first Gustcloak Harrier and Keeneye Aven. Budde drew a card off Krosan Vorine and took the 2/3 down, but Rood just replaced it with Gustcloak Savior. Unfortunately, Budde was about to hit Big Beast mana.

Finally there was Wolfman and Blume, a feud that drew fuel from Grand Prix - Atlanta. There, Wolfman played Blume in the last round of Day 1 for a spot in the Top 64. Blume won, and then went on to win the whole thing.

"This time, I get to beat you, and we win the tournament." -- Steve Wolfman

It all looked like it was going according to plan. They traded early creatures, but Blume's red-black wasn't feeling up to handling Wolfman's meatier green-red monsters. They stomped their way to 2020's first game win.

Right on their heels, Budde evened the score, having played Krosan Tusker and Titanic Bulvox on consecutive turns. He put his whole army in the Red Zone.

Baberowski had the upper hand in his match, but was taking his time dealing the killing blow.

Blume and Wolfman were on to their second game, only this time after a few early trades it was Blume on the offense with a Putrid Raptor. He followed up with a Frightshroud Courier to push the damage through. Wolfman had a Treespring Lorian, but Blume was free to chump and was ahead in the race. He put The Wolf to two, and then sent an Erratic Explosion to the head. It did not hit Festering Goblin. 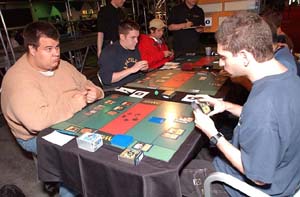 Budde and Rood hit a midgame stall after Budde's Pinpoint Avalanche took care of a 3/3 Stinger. Rood broke it with Crowd Favorites and swung into Budde's pair of 1/1's. Budde blocked and hardcast Decree of Savagery. Rood turned over an Oblation for the big save. The cards were no good, and the Favorites went the distance.

Pollock hung on as best he could against Baberowski, but his Siege-Gang Commander and Silent Specter came too late, particularly when Gustcloak Harrier got Improvised Armor.

The final game of the Blume-Wolfman match was a brutal one. Wolfman mulliganed, and Blume flipped over a Silent Specter on the fifth turn. Wolfman did topdeck a Needleshot Gourna after his hand was cleared out, but Blume had the Cruel Revival.

"So we need to win one of the next three games?" -- Kai Budde

He was his usual model of confidence. He played a pair of morphs versus Rood's board of Catapult Squad, Gustcloak Harrier and morph, and then showed Rood a Spark Spray. 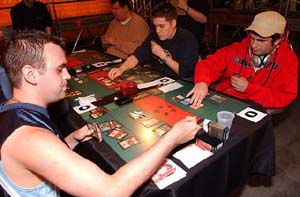 He piled on another morph. Rood suited his morph up with Dragon Scales and dropped Sandskin on one of Budde's morphs, earning a laugh from the German. He swung in and showed Venomspout Brackus when the Scales'd creature blocked. Shoreline Ranger brought back the enchantment, but Rood was unwilling to risk his beast against Budde's 5/5.

At the same time, Baberowski was stabilizing at a dicier life total. His Cutthroat caught a morph, but then Pollock took to the air with Sootfeather Flock, and by the time Baberowski put out a Wingbeat Warrior (augmented by Daru Warchief), Pollock had Threaten to drop him to three. He started churning his Undead Gladiator to look for some damage.

Finally, Rood was forced to block, but Budde had tricks aplenty. Vitality Charm and Patron of the Wild were bad times indeed for Rood's blockers. Another turn, and Budde took the game. Pollock fell right behind him.