Round 1: The Predatory Leash

s happy as Ben Stark was with his incredibly powerful UW Affinity deck, he was much less happy once he saw Martin Jůza's decklist.

"I have two Trygon Predators in my maindeck," Jůza said with a smile as he perused Stark's near-perfect Affinity list.

"How does he always get to beat me," Stark laughed with a smile. "It's so stupid!"

Stark and Jůza are both highly respected Limited masters, adding to the tension of this incredible first-round matchup. Stark's name is often the first name to come up when players are asked who they turn to in order to glean insights into a new format. Jůza's name is a close second, even Stark's own choice. Both players are very good friends, even teaming up with Shuhei Nakamura to participate in Grand Prix Providence earlier this year as a team, finishing just shy of the finals.

Stark admits freely that Modern Masters is easily one of his favorite Booster Draft formats. As such, he has put a tremendous amount of time into the format, more for fun than for understanding. It was no surprise when he brought a paragon of the blue-white Affinity archetype to the table. Jůza's deck is another of the major archetypes in the field, Five-Color Green. While the sheer aggression of Stark's deck would usually be enough to push a deck like Jůza's around, Jůza's list is stocked with targeted removal and a key pair of Trygon Predators. 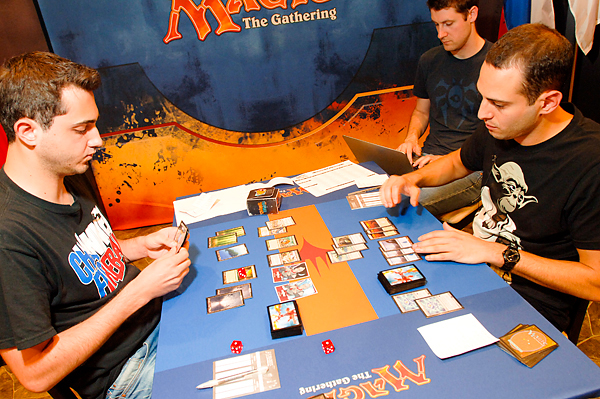 "Your deck is really good against mine," Stark admitted to Jůza after looking through his list. "I mean, mine is probably better in a vacuum, but yours is much better in this matchup. I'm really not happy."

Game 1 began with a very interesting decision point for Jůza. After Stark immediately kept his opening draw, Jůza was forced to think strongly about his keep.

"He always does this," Stark said with a laugh. "He'll think for a few minutes about a hand that isn't perfect, but then he'll keep it because it's the right decision and he's a good player."

In truth, Jůza's keep was far closer than it first appeared. His hand contained a lone Forest, Search for Tomorrow, Manamorphose, and Giant Dustwasp.

"I knew that if I kept it and I drew a land, I'd be fine," Jůza explained to me. "I was already going to be able to Search for Tomorrow, so the worst case scenario puts me a little behind if I miss drawing a land by turn two. If I manage to draw it, which is likely, I am just fine. I had a Torrent of Stone in my hand and an Eternal Witness, so I'd be able to kill a few things once I got going, anything that might put me behind. If I had been on the play instead of the draw, I would have immediately thrown the hand back. It is too risky to rely on that one-land hand without the extra chance to find another land, even with the Search for Tomorrow in hand."

In the end, Jůza was able to find himself a second Forest, and he was off to the races. 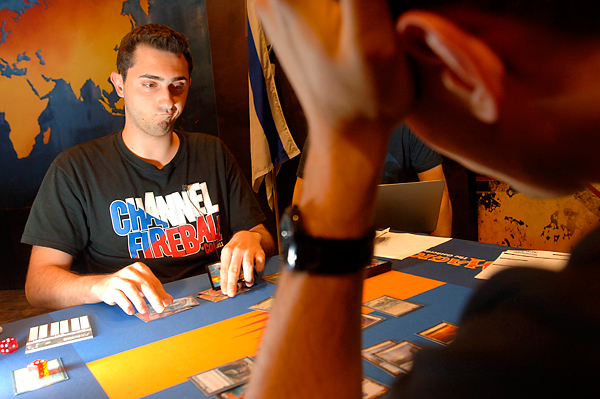 Jůza fights through the first game with a risky but potentially powerful start.

And boy were the races ever fast.

"I'm about to have an army of 1/2s," Stark said after spending his second turn playing an Etherium Sculptor. "If you can beat my Myr Enforcer, you win."

"I like to hear that," Jůza said, cocking his head.

As predicted, an army of Etherium Sculptors exploded into a Myr Enforcer on the third turn. Jůza's draw continued to provide him with lands, nullifying his light opener. This allowed him to blast the Enforcer with a Torrent of Stone. Unfortunately, he was quite dismayed when a Sanctum Gargoyle came from the top of Stark's deck to bring it back.

"I took this over a Meloku, the Clouded Mirror," Stark said about the Gargoyle. "It was the hardest draft pick I've ever made in my life." 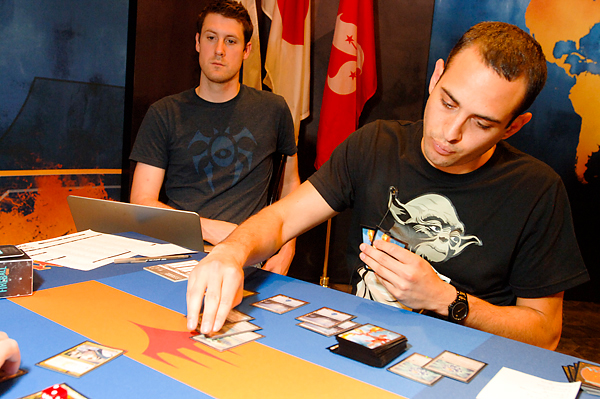 Not many people could take a Sanctum Gargoyle over Meloku the Clouded Mirror, but Ben Stark is one of the few players in the world capable of staying on target.

The immediate recovery was all Stark needed to take complete control of the game. It took Jůza a turn to regrow his Torrent of Stone with an Eternal Witness, and in that turn Stark was able to add yet another large creature to his side of the board. This kept him one creature ahead of the curve, and Jůza died shortly thereafter. In a match that Stark felt would hinge on the presence of Trygon Predator, Jůza's "best card by a mile," things began on a positive note for Stark.

Stark's opening draw for the second game was almost as explosive as his first. He had a pair of Æther Spellbombs, which would prove to be crucial, as well as an Etherium Sculptor to power out a pair of Frogmites. Those Spellbombs allowed him to continually push out his nemesis, Trygon Predator, clearing the way for him to attack for 5 damage each turn. Unfortunately, the cards stopped there. While he was taking huge chunks out of Jůza's life total, he was drawing lands to replace the spells he was playing. His last hope was a Bound in Silence that could tie the Predator up indefinitely.

Unfortunately, this lull allowed Jůza to build up other defenses. In one turn, sitting on 5 life, Jůza managed to get a Durkwood Baloth and a Marsh Flitter into play. This completely shored up his defenses, while giving him a five-point swing himself. A 5/5 Skyreach Manta soon followed, and he was left with a strong board position against Stark's much smaller team.

Over the next turns, Jůza found himself able to attack while leaving a few blockers behind to protect his far-dwindled life total. Still, the impact of those two turns of lands on Stark's side was enough of a reprieve to ensure that Jůza was in a fine spot. Even when Stark began to add to his board, netting a Myr Enforcer and a Sanctum Gargoyle, he was enough behind on the board that he couldn't recover. This time, the Predator showed up, and Stark was forced to throw everything he had at it to delay Jůza, leaving him unable to deal with what followed.

Game 3 began with a fairly passive start from Star, perfectly timed on the heels of a comment about his deck's aggressiveness. Fortunately for him, Jůza's deck provided very little in the form of early-game pressure to punish him.

"We finally get the one fair game," Stark said. "I have a Limited hand instead of Constructed, and he doesn't have a Predator. This is more how Magic is supposed to be. It's turn six, and I have no idea whether I'm going to win or lose."

Jůza had some tough things to think about himself. He had a Skyreach Manta and the Trygon Predator Stark didn't think he had in hand, but he was behind on board and in danger of a very strong assault from Stark. He was also facing an Æther Spellbomb, making any cast he made a waste of a turn.

He chose to cast Manamorphose for RW, planning to cast Manta for five. When he drew his card, he paused. He had drawn into a perfect Thallid Shell-Dweller and began to think about possibly changing plans to cast the Thallid and Predator in lieu of the Manta. Ultimately he chose against this, opting to force Stark to blow his Spellbomb on the large flier. In the end, he would come to second guess that decision.

Stark and his plethora of Affinity creatures flooded the board in the turns that followed, yet Stark didn't attack. It became very clear to Jůza that he was racing against Cryptic Command, and he began to rue not getting his Thallid into play earlier. With over fifteen points of damage on the table, Stark cast Cryptic Command to tap down a dejected Jůza's team, taking the game and match.

"Cryptic Command is my best card by far," Stark said.

"It was the only way he was winning that last game," Jůza said glumly. "I thought I was winning that last game, but I knew he had Cryptic. I maybe should have cast the Shell-Dweller and Predator on that turn. It would have at least given me the chance to build it up to make a Saproling mid combat, giving me some more play against Command. I guess he still had the Spellbomb, though."

In the end, while the Predator showed up in two games against Stark's Affinity deck, it was never able to connect, giving him the win in this matchup between friends and Limited masters in this exciting Modern Masters Draft format.