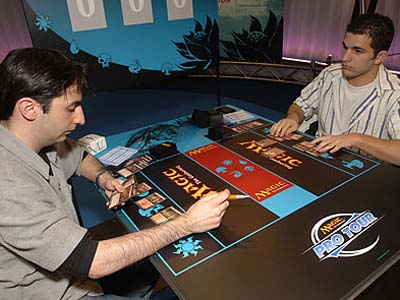 Raphael Levy's lifetime record against Gadiel Szleifer is 0-5 headed into this mirror match.

ro Tour hall of famer Raphael Levy has been on something of a Constructed run this season already. With two Extended Grand Prix in consecutive weeks, he has crept right up in the player of the year rankings, after a finish in Geneva that saw him going 2-1 in every draft he played. However, it was with a slight grimace that he sat down opposite Pro Tour-Philadelphia winner Gadiel Szleifer in round 1 of Pro Tour-Yokohama. He is lifetime 0-5 against Gadiel, including a few matches in early rounds and a rather confusing match between the Frenchman and the American in Swedish Nationals.

The grimace may also be because Levy had gotten his list from the team including Gadiel and Julien Nujiten just a few days before the tournament. Nobody likes the mirror.

Levy won the roll, and led with Magus of the Scroll, only to have it hit by Dead from Szleifer. He followed up with Keldon Marauders but was ultimately thwarted in his hope to have a cut-price Lava Axe, as Gadiel had a Marauders of his own with which to block and trade.

Gadiel played a Blood Knight on his turn, to which Raph had an end-of-turn Sulfur Elemental, followed by a Rift Bolt to allow it to rumble in unimpeded. Gadiel continued to play a land a turn, and used it to play another Knight and suspend a Rift Bolt. Again Levy used a Rift Bolt to sneak in some attacks.

When Szleifer's bolt came off suspension, the board was briefly cleared, only for Gadiel to play a Wildfire Emissary as a potentially huge attacker. The following turn he had a Browbeat, which took down Raph's life total rather than building the American's hand. End of turn Sulfur Elemental kept things close, with the swings making the life totals 10-9 in Levy's favour.

As Levy played his own Wildfire Emissary, he dejectedly asked, "Any mirror matches?"

Each player's deck was clearly set up to take down the big White Weenie presence expected here in Yokohama, and while the Wildfire Emissary plan was good for Nick Lovett at Worlds, and looks to be equally powerful now, it was never really the key pivot for this matchup. 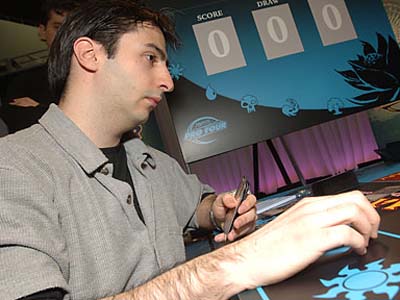 On his turn, Szleifer simply used Disintegrate on Levy's timeshifted 2/4 and passed, leaving his own Emissary back to block. Levy played a Magus of the Scroll and passed. In classic red deck mirrors, the Cursed Scroll fight would ultimately end up to be one of the most important ones, and it seemed likely that this trend would continue after a fashion. Gadiel played one of his own, leaving one card left in his hand to Levy's two. Raph got rid of one of these at the end of turn by playing another Sulfur Elemental.

Levy did some math in French before activating his Magus naming Disintegrate to kill Gadiel's scroll man. He then passed the turn after it successfully took down the 1/1.

The following turn, after his Magus had been killed by Gadiel, Raph used his Disintegrate to clear a path and swung for enough to force Gadiel to scoop it up after his draw.

Each player took their time on sideboarding, with Raph admitting that he had no clue how best to sideboard for the mirror. Gadiel suggested that Orgg was pretty good in this matchup, but it was clear that neither had expected it to come up much, and they didn't have too much of a plan. 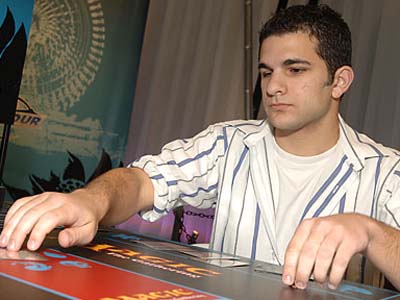 The first play of the match was a Keldon Marauders from Levy, who was on the draw in the second game. It got to attack unimpeded, and was briefly joined by Blood Knight, though the Knight died to Fiery Temper in short order. The Marauders soon vanished too, but Raph had a Wildfire Emissary, and was piling the pressure on, while Gadiel had missed a land drop and was slow rolling things a little.

Rift Bolt killed the second Knight only for it to be replaced in a split second by Sulfur Elemental, making a big clock against Szleifer, who didn't have much in the way of defence. Another Fiery Temper from Szleifer meant that the attack wasn't lethal, but he was still down to just 9. He played his fourth land and used Avalanche Riders to hit Raphael's lone Fungal Reaches, but chose to keep the Nomads on defence, wary of his tiny life total.

More Riders came along, but there was a split second Suflur Elemental from Raph to fight back with. A Fiery Temper cleared the way, and attacks from Raph took Gadiel to 4.

A third Avalanche Riders really put the hurt on Levy's land, but at that point, it wasn't going to be enough as he was losing on the board. It was only a turn later that Gadiel was scooping it up.

After the game each player showed off their sideboarding, and discussed what the best plan was for the matchup. Levy had kept in his Keldon Marauders, something he felt was correct on the draw (in case Gadiel had elected to go super aggro on the play, so that he had a blocker). If he had been on the other side though, he probably would have done just what Gadiel did-taken them out. Szleifer had a full set of Avalanche Riders after boarding and had taken out his Sulfur Elementals in favour of more late game power, but ultimately it was the fact that he faltered on hitting his mana to get there that had ended it for him.