Round 1: Richard Hoaen vs. Jeff Fung 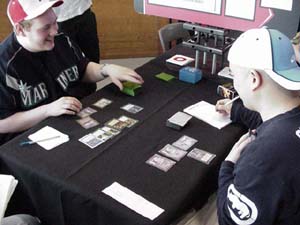 Rich Hoaen can't wait to draft. While he claims to "hate" constructed Magic he loves Limited and who could blame him. He is fresh off of a Top 8 performance in Yokohama and barely lost any matches when drafting his trademark b/w cleric deck. As the feature match shuffling got started he groused at me about an inaccuracy in his Yokohama coverage. "You said I took Vile Deacon over Aven Redeemer!"

Jeff Fung has a Pro Tour Top 8 under his belt as well. Granted it was 1998 but still. He asked Rich if he was included in Gary Wise's preview of the event. The preview was not up yet but Jeff doubted he was included, "I am kind of washed up..."

Jeff was not able to keep his opening hand but was satisfied with his next six and kicked things off with Duress. "I got trips," shrugged Rich as he showed off three Concentrates a Smother and a bunch of lands that produce blue and black mana. One of the Concentrates went to the bin.

Jeff began to cycle Undead Gladiator at the end of Rich's turn and recovering with cards that were dead weight in the Tog match up—Mutilates mostly. Rich went to four mana and cast one of his remaining Concentrates. Jeff decided to play his Gladiator on turn five but it was a victim of Innocent Blood. Rich also played a Compulsion.

Jeff wanted a sixth land and even cycled his freshly returned Gladiator in search of one but it wasn't happening. You could hear the machinery of Rich's deck rumbling to action as he started to use Compulsion at the end of Jeff's turn. Jeff didn't find his sixth land for three turns and by that time Rich had crafted a hand he could win with. He Cunning Wished for Mana Short, countered a Duress and a Tutor and when he cast Mana Short at the end of his opponent's turn, Jeff merely scooped, "That'll do it."

Jeff mulliganed a two-lander. He was staring at late plays of Visara and Mirari and couldn't keep it even with Duress and Skeletal Scrying staring at him seductively. Rich kept his hand and had his optimal turn two Compulsions. Jeff kicked things off with a cold Cabal Therapy on turn three naming Circular Logic. He found none and saw Blood, Spike and a couple of Concentrates. "Of course!" exclaimed Jeff. Rich drew another Force Spike and cycled one way looking for a second blue source to trick Jeff into running into the second Spike but he did not find one and sullenly played a Swamp. 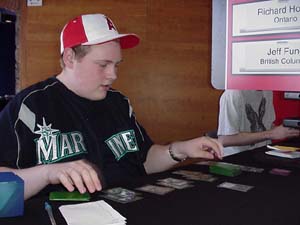 Jeff cast Diabolic Tutor and agonized over what card to choose. Finally he settled on a card that last saw play when he was drafting on a Sunday—Disrupting Scepter. While he was making his choice and shuffling up he let Rich go ahead with his next turn. Rich did not have a fourth land, "When you are done shuffling it is your turn."

Jeff played a Cabal Coffers and used another Tutor to find a Cabal Therapy and cast it. Rich 'cycled' away a Concentrate but Jeff named the card anyway and was tickled to find two of them sitting in Rich's hand, "You ripped one! How nice." Rich played his fourth land and passed the turn back to Jeff who had his Scepter ready to hit the board.

"Wha-at!?! What is that?" asked Rich at the sight of the ancient relic. Jeff just smiled and sticked him. Rich played another land but couldn't find a card drawer to get him out form under the stick. When he countered a Cabal Therapy after being sticked again Jeff played a Nantuko Shade and sac'ed taking Rich's last non-land card.

Rich thought for a long time about what he should do. "I wonder if I left my garage door open. Did I tape Friends?" Jeff teased while Rich looked for a way out. "I know, I know. I'm just trying to think about conceding or it I can actually win this." Rich made his decision known when he reached for the sideboard of Game 3, "Island would have been nice that game." That drew an arched eyebrow from Jeff, "I HAVE mulliganed every game so far!"

Neither player mulliganed this game and Rich opened with Duress. He was able to take a Smother but saw Visara, Nantuko Shade and Undead Gladiator queuing up behind three Swamps. Neither player did anything for the next couple of turns until Jeff cycled his Gladiator at the end of Jeff's turn and cast Duress on his turn three. He saw Circular Logic, Concentrate, Engineered Plague and two Islands. When he took the Logic, Rich removed it from the game and put it in the madness zone and looked at Jeff with a challenging glint in his eye. Jeff laughed at him and said, "All right. I say whatever it is I need to say to make THAT go away." Rich grinned and did nothing. Jeff thought for a moment and declared his attack step and managed to get clear of the Logic for his second main phase Cabal Therapy naming Concentrate.

What could Rich do but play Engineered Plague? After a brief consultation with the judge about creature --and some banter about the creature types of each player's sisters and mothers—the plague came down naming insects. Jeff traded the Shade in his hand for his Undead Gladiator and sent it back to Rich. Rich seemed surprised when his deck yielded a Duress of the top and he cast it. Jeff Skeletal Scryed for one in response. "That's one each," Rich exclaimed as he noted the life loss. Rich had lost one life last game when he used a Polluted Delta—so far those are the only tow life changes recorded in the match. He took a Therapy but Visara was still looming in Jeff's hand.

After two more turns of nothing the Visara hit play. Rich had an answer; he cast Upheaval and replayed an Island. Jeff nodded appreciatively and played a Swamp and discarded two more of the same.

Neither player did anything until the Rich hit four lands and said, "Black". He then flipped a Persecute into the middle of the table. Jeff was reeling but he returned his Gladiator and plugged along. Rich seemed to be taking control of the game and cast deep Analysis. Jeff tried to keep pace by cycling and returning Gladiator and pored over Rich graveyard trying to figure out what to name if he played the Gladiator and flashed back a Therapy. "Have you deduced my exact hand?" teased Rich. Jeff resolved to go for it and flashed a Therapy back naming Circular Logic. Rich meekly showed him a hand of five lands and two Engineered Plagues, which prompted a, "Spicy!" from Jeff who had just learned that he was still in this one.

Rich flashed back his Deep Analysis and found a Duress, which nabbed a Corrupt. He then played a Zombie Infestation. Jeff's status in the game was once again in question and Rich made two zombies at the end of Jeff's turn. He scrambled for paper and pen to make tokens with, "I didn't think I would ever have this in play with out the game being over so I don't have zombie tokens!"

He attacked for four on the next turn but Jeff showed some signs of life with a Visara. Rich shrugged and made another token. While he was writing the power and toughness on the token Jeff grew short with him, "You don't have to write 2/2 on each and every one I know what they are!"

Rich teased him, "What should I write then, Zombie?"

Visara ate a token and Jeff took another four points. He cast Haunting Echoes and while disassembling Rich's deck he noticed a Deep Analysis removed from the game, "Flashed it back, nice tech." "I'm tricky that way." After Jeff was done mauling his opponent's deck, Rich wanted to know if he could look through his deck and see what was left. The spectators scoffed at a lower judges ruling that he could not but head judge Marc Hernandez confirmed that he could not. Rich asked if he could look at his deck while shuffling which only earned his a stern look.

One attack with Visara and a Corrupt later and Rich was left with only one way out. He dug into his deck with Deep Analysis and Compulsion to find an Innocent Blood but it was not to be.