Round 1: Rob Nadebaum vs. Gregory Romans 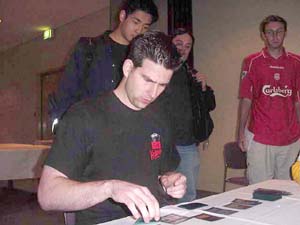 The Game starts slowly with Greg 3rd turn drop (Pilgrim of Grace) the first creature to hit the table. Rob's reply was in the form of a Mystic Crusader. Greg drafted 2 sets of Ghostly wings and equipped his cleric as the traded attacks for the next 2 turns Greg forced the tempo with a Hydromorph Guardian which was answered with a Crippling Fatigue. The attack stopped as the flighted Pilgrim was baulked with a Kirtar's Desire.

Greg then asserted his dominance of the skies with Ghostly Wings on his Auramancer, an Aven Smokereader and Balashan Collaborator. From here a Morbid Hunger and Teroh's faithful only prolonged the inevitable flying onslaught.

Greg was keen to rap the reigning National Champion up quickly opening with a Patrol Hound & ambassador Laquatas. A Militant Monk and finally a Mystic Zealot shut the door for Greg with Rob on 9 life. From the sideboard Greg was able to add a stern Judge which Rob was able to morbid hunger. But Rob could still not go on the offensive, even with the addition of a Mystic Crusader. The Crusader was able to push for 2 attacks but stayed back to block the Hound as Ron finally drew into a shelter, which not only got the Patrol Hound but an extra card for the first strike. A Balashan Collaborator caught the Morbid Hunger as it was flashed, and the skies were closed with Robs Aven Flock.

A Patriarch's Desire eventually removed the Zealot, but it returned immediately with a Zombify, it was now Rob's turn to apply pressure with an Aven Flock. Greg was only able draw land here and with a zealot, a crusader a flock and a monk he committed to an alpha strike conceding the monk to bring Greg down to 10, and then 6. Greg preserved a blocker (Laquatas) with a Ghostly Wings but Rob was running what appeared to be team "Infinite Little White Guys" as an Auramancer and an Angelic Wall. A third alpha strike saw Greg life total reduced to zero – and that's a bad thing.

In an almost identical start, Greg was able to start with the Patrol Hound and Ambassador Laquatas. They were able to attack early but were slowed with a Pilgrim of Virtue. Greg saw has Cephalid Looter for the first time but it as quickly removed with a Patriarch's desire. The return of the Hydromorph Guardian and the Stern Judge gave Greg the clock that he needed to put Rob on for the win. Rob took the plunge and dropped a fourth Swamp – cleaning out Greg's hand with a Mind Sludge. The Judge however would be a problem with only a few minutes remaining. The guardian was targeted by a Morbid Hunger, but ever on the boil – Greg sacrificed to avoid giving Rob any life. Next turn Rob drew his 9th land to hit the Judge by flashing the Hunger, it had done its job taking 13 life. A Teroh's faithful put Rob into the safety zone (9 life) as time was called. Mockingly, Greg showed the Shelter he had drawn a turn too late to cave the judge. Knowing the result was a draw both players took their turns quickly – drawing and saying done.