Round 1: Robert Castro vs. Steven Hlaj 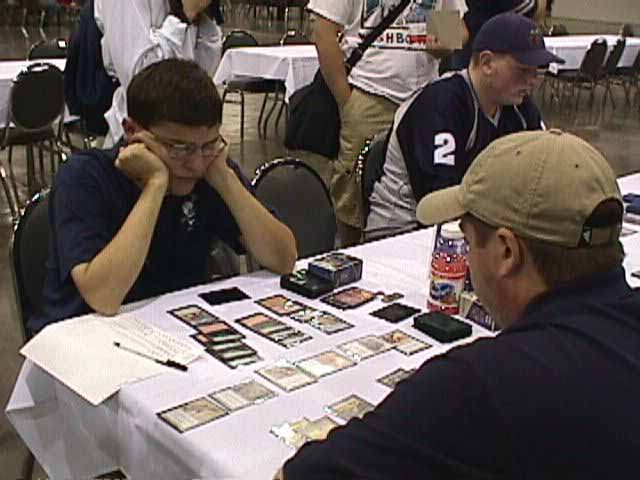 Robert Castro is from Wisconsin and is not afraid of a bit of competition, having played in a number of Pro Tour Qualifiers (PTQs) and Grand Prix, as well as winning the 1997 Wisconsin State Championship. His opponent, Steven Hlaj from Toronto, Ontario, was somewhat less experienced, with few big tournaments under his belt. This matchup was going to be a close one as both players were playing competitive decks. Robert Castro was using a Ponza/Wildfire deck with Chimeric Idols from Prophecy and Steven Hlaj was using a control Rebel deck.

Robert won the die roll and chose to go first. He began by laying a Ghitu Encampment. Steven played a Plains and a Mother of Runes, an extremely annoying creature for red to deal with. Luckily, Robert had a Seal of Fire which he was able to play to kill the Mother of Runes on the following turn. Over the next few turns, Steven cast a Ramosian Sergeant and then searched for a Ramosian Lieutenant. Fearing the searching ability of the Lieutenant, which could be used to get either a Thermal Glider or a Lin Sivvi, both of which are immune to the Cave-in in his hand, Robert decided to cast the spell killing both the Sergeant and the Lieutenant. Steven replaced the searchers with a Steadfast Guard from his hand and Robert then followed up his previous Cave-in with two Chimeric Idols. Unfortunately for Robert, Steven had two Disenchants to remove the Chimeric Idols and he also added a Longbow Archer to the weenie rush on the board. On the eighth turn, however, Castro cast a Wildfire to clear the board and devastate Steven's mana supply. Castro then followed that up with a third Chimeric Idol and began beating down. Hlaj was able to cast a Defiant Falcon and then a Crusade, but Castro prevented Hlaj from searching or casting more spells by destroying his Gaea's Cradle with a Dust Bowl. By the time Steven drew a Mother of Runes to accompany the Falcon, Robert Castro had a Cave-in ready to clear the board, attack with the Chimeric Idol, and win game one.

Before game two began, the players had an opportunity to sideboard. Robert Castro sideboarded in a fourth Cave-in and three Powder Kegs for three Stone Rains and a Pillage. Steven Hlaj brought in two Absolute Laws to nullify red removal spells and two Seals of Cleansing to help deal with Masticore, Keg, and Chimeric Idol. 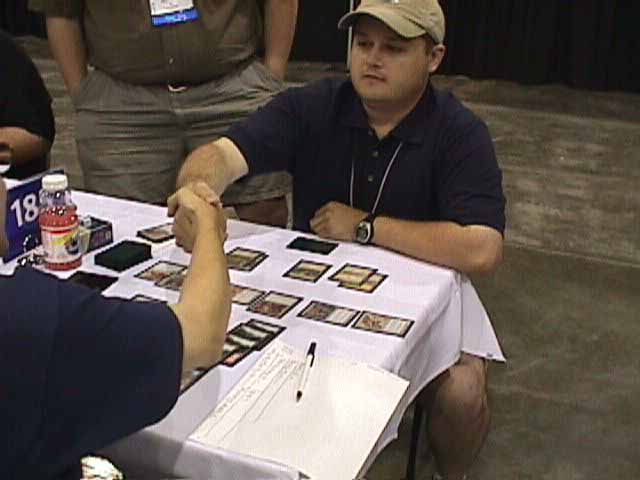 Steven chose to go first this game and he began with a second turn Defiant Falcon, followed up by a third turn Steadfast Guard. Robert Castro cast a Seal of Fire and killed the Falcon before it could begin searching, but then Steven cast a Crusade and a Ramosian Lieutenant over the next two turns, putting the pressure on Robert to find an answer. Because of the Crusade, Robert had to use both a Cave-in and a Seal of Fire to kill the Ramosian Lieutenant, knocking Steven's life total down to 17 and his own life total down to 8. Steven then attacked for three, cast a Masticore, and quickly finished off Castro to win game two.

Robert Castro chose to go first in the third and final game of the match. Robert got off to a quick start, ignoring Steven's Steadfast Guard and Pillaging his second Plains. Steven then played a Dust Bowl, tipping Robert off that he didn't have any more Plains in hand, and cast a Ramosian Sergeant. Castro played a Dust Bowl on the fourth turn, sacrificed a land to kill Hlaj's Dust Bowl, and removed a Hammer of Bogardan from the game to Cave-in and kill both the Steadfast Guard and the Ramosian Sergeant. Steven missed a few land drops, giving Castro time to play a Chimeric Idol and begin chipping away at Steven's life total. Eventually, however, Steven found a second Plains with which to Disenchant the Idol, followed up by a Defiant Falcon which died to Castro's Seal of Fire, a Disenchant for Castro's Fire Diamond, and then an Absolute Law. Castro got out another Chimeric Idol with which he was able to get in a few hits, but it, too, eventually died to Hlaj's abundant artifact destruction (this time, a Seal of Cleansing). In the meantime, Hlaj cast a Steadfast Guard and a Ramosian Lieutenant. After attacking for a few turns, he drew enough land to search for Lin Sivvi and then begin searching for Thermal Gliders. Eventually Castro drew a Masticore, but it wasn't in time to save him from the Rebel rush, so Steven Hlaj won the match.