Round 1: Robert Dougherty vs. Michael Pustilnik 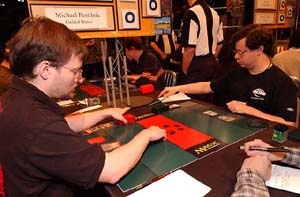 With multiple Pro Tour and Grand Prix victories and top 8s, these two players need no introduction. As they are shuffling their decks Mark Rosewater comes over and asks Rob if YMG has something new to spring upon the world. Rob replies " I have a newborn.. what do you think?"

Both players are playing a reanimator deck. The main difference is that MikeyP, who nicknamed his deck "The Don", has 10 reanimation spells his Blue and Black version while Rob has 8 in mono Black version. The Don is built for speed as it has twelve spells on turn one that can put a fatty into the graveyard (4 each of Entomb, Careful Study and Hapless Researcher). The YMG deck also features a full assortment of discard spells, including four each of Duress, Cabal Therapy and Last Rites.

Rob wins the roll and elects to go first. He mulligans a miserable hand which only has two Cabal Therapies and a five various lands. His new hand is much better and his first turn Duress takes a Mana Leak from MikeyP's hand which also has two Careful Studies, an Entomb and three various lands. MikeyP can only play a land and say done. Rob's next turn is textbook benzo as he entombs for a Visara and then reanimates it with Reanimate, taking 6 in the process. MikeyP entombs his own Visara at the end of Rob's turn. He top decks a Duress, but it whiffs when Rob reveals his hand of Verdant force and City of Traitors. MikeyP then searches for answers with Careful Study, but all he can find are more lands which he discards. Rob Last Rites for 1 and takes MikeyP's last non land spell, a Careful Study. MikeyP draws consecutive lands while Visara bashes his face in. 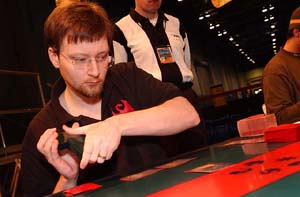 MikeyP sideboards in the traditional Reanimator sideboard, which includes Mesmeric Fiends and Guilded Drakes. Rob goes with Plan B, a transformational sideboard as he takes out his exhumes and off color fatties for beatdown such as Phyrexian Negator, and Faceless Butcher.

Both players keep their hands and MikeyP leads off with a Duress. He takes a Duress from Rob's hand which also has another Duress, two Entombs, two Cabal Therapies, and a Swamp. Being a gentleman, Rob returns the favor and takes a Duress from MikeyP's hand which also has a Hapless Researcher, a Polluted Delta, a Life/Death, and a Reanimate. All MikeyP can do is play a Hapless Researcher during his turn. Next turn Rob casts both of his Cabal Therapies, and using his notes he names the correct cards and takes both of the reanimation spells from MikeyP's hand. This leaves Hapless Researcher #2 as MikeyP's only card left. It comes out the next turn, and the pair of Researchers are able to get Rob all the way down to 15 before Rob Entombs for a Nether Spirit to stop the sick beats. MikeyP draws a Careful Study and then an Entomb, but casts neither of them hoping to draw a fatty or reanimation spell first. Rob uses his second Entomb to get Visara, and his freshly drawn Vampiric Tutor to get Reanimate. 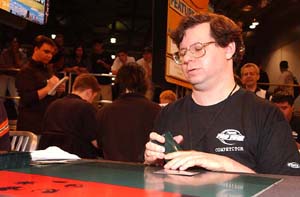 Visara is brought back to life and MikeP sacks a Researcher to look for an answer. Luckily, a Recoil is on top, and Visara is returned to Rob's hand. Fearing a Reanimate from MikeyP, Rob discards a land. A few turns pass while there is no action. Rob draws two lands in a row, one being a key City of Traitors which allows him to hard cast Visara. The other Researcher takes one for the cause as MikeyP looks for answers. MikeyP keeps looking with Careful Study, but the best he can do is a Mesmeric Fiend, which fizzles as Rob Entombs a Swamp into his graveyard. The Mesmeric Fiend gets in the way of the Nether Spirit as Visara brings MikeyP down to 7.

A last attempt to stop the bashing happens as Hapless Researcher #3 looks for an answer, but he finds is Mesmeric chump blocker #2. Ending his misery, Rob uses the last card in his hand, a Vampiric Tutor, to fizzle the Fiend's effect and to get a Faceless Butcher to end the game next turn.