Round 1: A Rocky Start

"Three years ago this would've been a feature match." -Kai Budde

course, Kai is always news, especially this weekend on the occasion of his induction into the Hall of Fame. While Budde went on hiatus for the intervening years, Austrian National Team fixture Helmut Summersberger's resume has grown, including a GP win at Lille. That bodes well for his performance in Legacy Constructed tomorrow. For now they would battle in Standard, Summersberger with a Makeshift Mannequin deck, Budde with Big Green-Red. 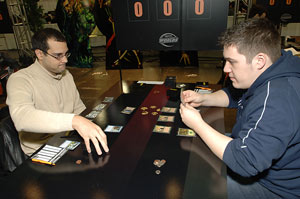 Helmut Summersberger and Kai Budde play out one of many big-name pairings in Round 1 of this year's star-studded World Championships.Summersberger opened with a suspended Riftwing Cloudskate and then Shadowmage Infiltrator. Budde made a face. He did not have the Incinerate to dispatch Finkel. What he did have was triple Wall of Roots and no third land.

Summersberger swung, then evoked Mulldrifter to find his fourth land, a Faerie Conclave. Budde drew Karplusan Forest to get a second red mana, but didn't seem to like any of his options. He settled on Siege-Gang Commander.

Cloudskate came off suspension and sent a Wall back. Shriekmaw axed the Commander. Summersberger did his best to keep a serious face, but it was clear the game was already over when he leaned back in his chair and clasped his hands behind his head. Budde frowned at his cards, trying to squeeze out that last 1% chance of victory. He dropped Garruk, untapped two lands, and replayed his Wall and Tarmogoyf.

Summersberger smashed in with his team, dropping Budde to 9. Another Cloudskate took care of Garruk. Budde furrowed his brow and tried to find an out. Summersberger flashed the Profane Command in his hand, sending them to Game 2.

Budde led out with Treetop Village, and a Thoughtseize from Summersberger revealed a distinct lack of action. Summersberger took Wall of Roots, leaving just Detritivore and some lands. He again rolled out the package of Cloudskate and Finkel while Budde charged his storage land. Unfortunately for him, Summersberger had nothing but basic lands.

A second Finkel hit the board and Budde could do nothing but shake his head. He spent some of his stored mana to get out a Siege-Gang Commander. The Cloudskate bounced the storage land and was joined by another that took care of the Commander. Budde couldn't even replay it that turn, owing to a shortness of red, so Summersberger was free to untap with Venser at the ready, taking the match.