Round 1: Ryan Fuller vs. Justin Gary 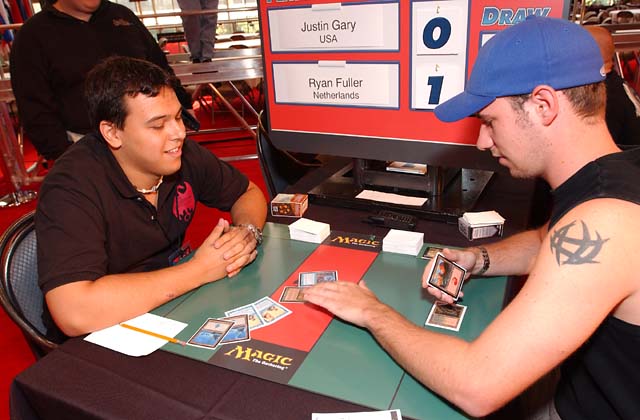 Ryan started the match by turning off his cell phone, then sent his regards to all of the beautiful women of the Netherlands who are reading at home. Fuller won the die roll and considered the "play or choose sides" rule, since he couldn't see the clock from where he was sitting, but decided to play first and settled for his unfortunate seat. Justin happily mentioned that he would be 100% willing to go over the table and trade sides, if Ryan really wanted to be able to see the clock...

After a bit of shuffling of their own and each others' decks, the duo wished each other good luck and got to the game. Ryan started off by mulliganing, and Justin keeps his hand. Ryan started with an Urborg Volcano, to which Justin answered with an island. Ryan played a Mountain, and Dark Ritualed out a kicked Phyrexian Scuta, having topdecked the Ritual to make his mulligan hand a much better one. Justin says "okay" and played a second island. Ryan's Scuta entered the Red Zone, knocking Justin to fifteen, and Ryan played a Sulfurous Springs. At the end of the turn, Justin played Accumulated Knowledge, then played a third Island with no play on his turn. Ryan's Scuta kept knocking, dropping Justin to ten, and Justin has a second Accumulated Knowledge to cast... up on cards but down on life.

Justin added two mana to his mana pool and played Gush, then Opted with one of his mana, electing not to keep his first peek. Justin played a land and a Static Orb, then discarded from his over-full hand, losing an island, Thwart, and Opposition. Ryan untapped, played a Rishadan Port, and cast Blazing Specter, which Justin allowed. The pair entered the Red Zone, dropping Justin to three life, and Justin discards a Thwart to the Specter's effect. Justin untapped, played an island, and is done with his turn. Ryan untapped the two creatures, and enters the Red Zone again... Justin floated two mana to his pool and cast Gush, but then admitted that the creatures have gotten him. 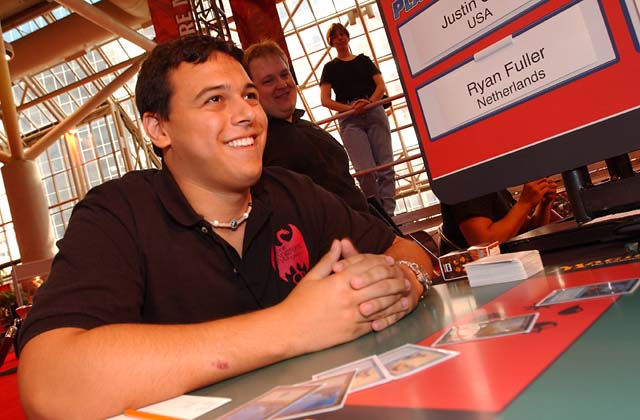 "Damn you, Ritual off the top!" Justin said while shuffling for the second game. "Why couldn't you be a land? Land would have been fine..." Nonetheless Justin decided to get on with the rest of the match, and play first. Justin kept his hand, and Ryan looked at his cards a while before keeping his hand. Justin played an island, while Ryan played a Sulfurous Springs and used it to cast Duress, seeing two Mahamoti Djinns, a Spontaneous Generation, and an Opt. Ryan took the Opt, Justin played a second Island on his turn, and Ryan played a Mountain, took another point from the Springs, and Addled Justin, naming green and taking the Generation. Justin played a third island, while Ryan played another Sulfurous Springs, took two points of pain from his lands, and cast Phyrexian Arena. Ryan went to fifteen during his upkeep to draw another card, then played a swamp, then took yet more damage from his lands to Ritual out a Skizzik with kicker. Justin goes to 15, played an island, and is done. Ryan goes to 13 from his own Arena, then entered The Red Zone with the Skizzik, dropping Justin to ten life.

A kicked Phyrexian Scuta was cast by Ryan, dropping him to ten life, and Justin has the Foil. Ryan played a Swamp, then Justin played a sixth island and casts a Mahamoti Djinn. Ryan went to nine from his Arena, then thought on his turn. Justin remarked, "See, my turns are easy!" to which Ryan answered, "Yeah, that's what happens when you play the stupid creature deck... see, my deck is complicated and requires me to make decisions on my turns." Ryan added an unkicked Scuta to the fray and played a Rishadan Port, and kept the Skizzik home. Justin was Ported during his upkeep, then draws his card for the turn, floated a blue mana to his pool and cast Gush, drawing two more cards, then replayed one of the lands he picked up and cast the second Mahamoti Djinn from his hand. Ryan went to eight life from his Arena, then played a mountain. Ryan did a lot of thinking on his turn, and the banter began, with the two Mahamotis dancing around. Ryan sent his creatures into the Red Zone, and Justin blocked the creatures with his Djinns, then saw both Djinns go to the graveyard via Urza's Rage, one for each. Justin cast Opt on his turn and kept it, and Ryan went to seven life from his Arena, then cast Addle. Justin Counterspelled the Addle, and Ryan had no further play, Porting an island on Justin's turn. Justin floated a blue mana then cast Fact or Fiction after drawing for the turn, turning up two Walls of Air, two Yavimaya Coasts, and a Foil. Ryan split these cards into the Coasts and a Wall versus a Wall and Foil, and Justin took the two lands plus the Wall of Air, after some clear miscommunication as to when Ryan had finished splitting the piles. Ryan went to six from his Arena and cast Blazing Specter, dropping Justin to eight, and Justin discarded a Yavimaya Coast to the Specter.

After getting in a knock with the Specter, Ryan cast Plague Spitter, which Justin answered via a Foil, discarding an island and the second Yavimaya Coast. Justin was Ported once again, then contemplated his play, trying to decide whether Wall of Air could be cast safely at this point... then dropped the Wall of Air. Ryan went to five from his Arena, then played a swamp. Ryan Ported Justin again, and Justin cast his first Accumulated Knowledge of the game. Ryan goes to four from his Arena on his next turn, but had no play on his turn, so he just Ported Justin once again. Justin likewise had nothing to do, so he passed the turn, and Ryan went to three life. Ryan cast Blazing Specter, which was negated by Counterspell, and Ryan cast Bloodfire Dwarf. Justin had a Counterspell for that as well, and once again Ryan Ported Justin, but Justin finally had a play, playing Yavimaya Coast and casting a two-point Spontaneous Generation. Ryan went to two life from his Arena, drew his two cards for the turn, and concedes that the game is lost.

"I could have won that," Ryan said while sideboarding, "Could have, should have, didn't." 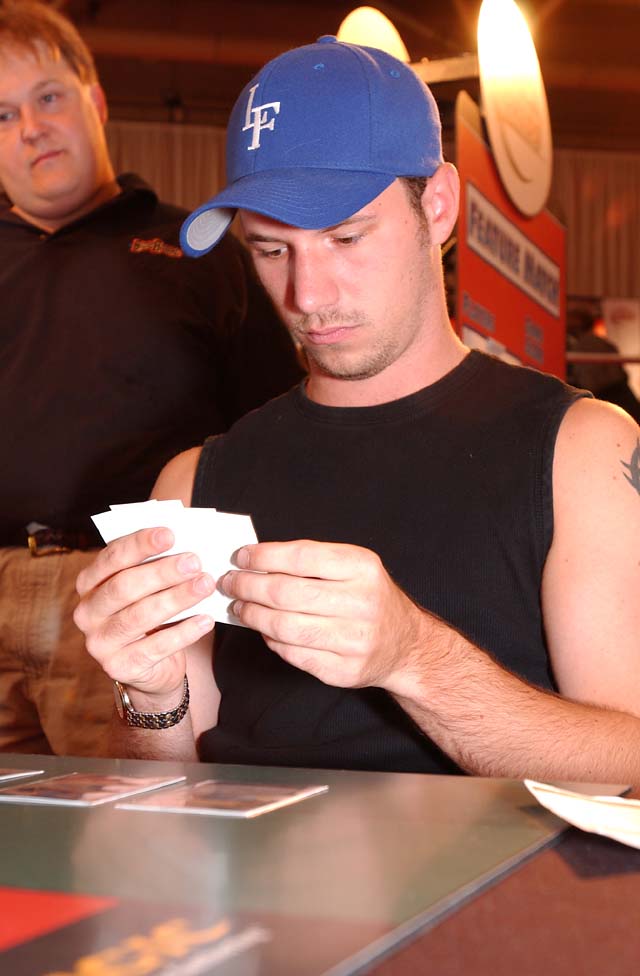 "I should have sat with the Motis," Justin said back to him, "those should have killed you. I would have felt really bad if I lost that game." Both players checked back into their sideboards for the third and deciding game of the match. Ryan obviously elected to play first, and they both wished each other good luck. Ryan kept his hand, and Justin gave it some thought before keeping. Ryan started off with a Sulfurous Springs and a Duress, taking a Static Orb and seeing an Accumulated Knowledge and some lands. Justin played an island, and Ryan played a Port and tapped that Island. Justin played a second and passed the turn. Ryan played Urborg Volcano and Ported Justin again, and Justin played another island. Ryan played a swamp and Blazing Specter, which Justin allowed in after spending his Accumulated Knowledge, then knocked a Llanowar Wastes out of Justin's hand with his Specter. Justin floated two mana on his next turn then played Gush, playing a Yavimaya Coast and casting a seven-point Spontaneous Generation. Ryan untapped and swung with the Specter, dropping Justin to sixteen, and knocking an island out of Justin's hand. Ryan cast Plague Spitter, which was met by a Foil, discarding two islands. Ryan played an Urborg Volcano and was done... Justin swung for seven, dropping Ryan to twelve, and played an island. Ryan played a mountain and kicked a Skizzik at Justin, and Justin cast Accumulated Knowledge for two, then allowed the Skizzik, taking seven points, going to eight life. Justin discarded Fact or Fiction to the Specter, then knocked back at Ryan's life totals with all seven Saprolings, knocking Ryan to five life. Justin played a Llanowar Wastes and was done with his turn. Ryan drew for the turn, then cast Addle on blue, taking Justin's Thwart, leaving a Gush in Justin's hand. Ryan followed up with an unkicked Phyrexian Scuta, which resolved. Justin played an island and was done with his turn, keeping the Saprolings on the defensive. Ryan drew and cast Duress, and Justin cast his Gush in response, then offered Ryan the hand of Yavimaya Coast, Thwart, and Opposition; Ryan took the Opposition, rather than losing. Justin's Llanowar Wastes was Ported during the upkeep, and Justin cast Accumulated Knowledge for three cards, then played the Yavimaya Coast from his hand.

With time beginning to run out, Ryan played a Dust Bowl and had some upkeep effects, tapping the Llanowar Wastes. Time ran out on Justin's turn, and he drew for the turn, then Repulsed the Skizzik for the win.