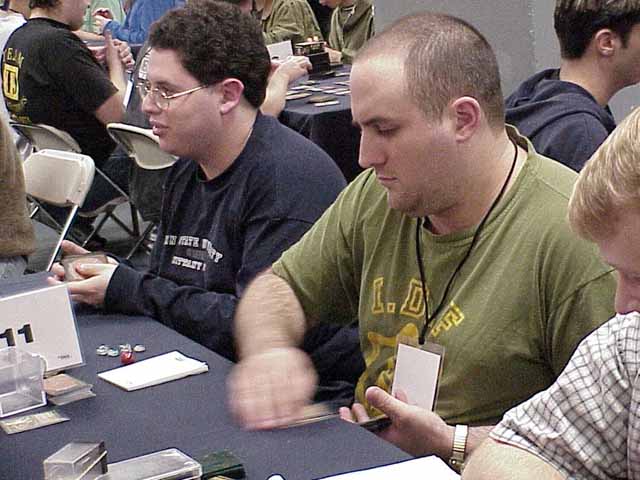 This match featured two well-known players. Terry Tsang is one of the top players in Canada, and he made top eight in Pro Tour New York '99. Mike Turian is former member of Team CMU and a current member of New CMU - he is known for being a big fan of green. However, in this matchup he was playing a red/blue tempo deck with lots of bounce (two Seals of Removal) and one bomb, Two-Headed Dragon. Terry has a red/black deck that is filled with removal and bombs, including Ascendant Evincar, Squee, Notorious Assassin, Arms Dealer, Haunted Crossroads (and a Highway Robber to go with it!)

To decide who would go first, Mike offered to flip a bunch of coins and have Terry guess whether more heads or tails will come up. Terry declined. Then he lost the die roll. Mike decided to play first.

Mike started out strong with a Kris Mage on his first turn and a Seal of Removal on his second, and Terry played a Misshapen Fiend. Terry then played a Haunted Crossroads to get his recursion going (unfortunately, it wasn't so strong against Mike's bounce). Mike played a Wild Jhoval, and Terry then played a Lightning Hounds on his turn. Unfortunately for him, Mike had a Withdraw waiting in his hand, unsummoned both of Terry's creatures, and attacked with all of his. Terry played his Lightning Hounds again, but the Hounds were bounced by Mike's Seal of Removal. Mike also played a Henge Guardian, and things on the ground were looking grim for Terry. Terry replayed his Hounds yet again and also played a Laccolith Warrior, but Mike topdecked a Panic Attack, used it on the Hounds and the Warrior, and rushed Terry for the win.

Seeing how well Panic Attack worked last time, Mike decided to put in another one, taking out an Alexi's Cloak. Terry did not do any sideboarding. 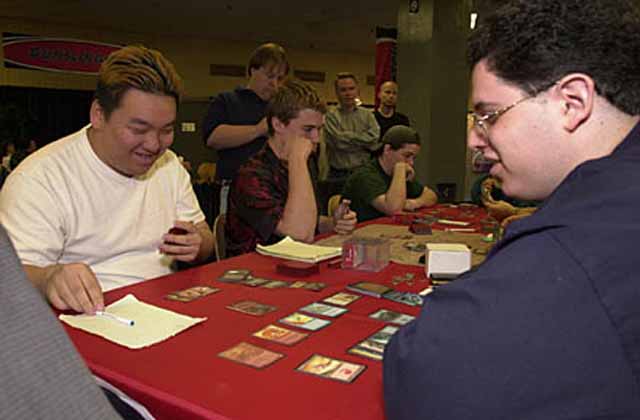 Neither player mulliganed. Terry went first, and led off with a Misshapen Fiend (again!) and a Nether Spirit. Mike countered with a Laccolith Grunt. Terry attacked with his creatures and played a Wild Jhoval, but Mike halted Terry's creatures in their tracks with a Sapprazzan Outrigger. Terry attacked with the Spirit and the Fiend, and Mike didn't block (if he blocked the Nether Spirit, Terry would just get it back). Terry then played an Arms Dealer. Mike played a Seal of Removal, and attacked with his Grunt (no block). Terry played a Highway Robber, and Mike played Henge Guardian. The next turn, Mike continued to play good creatures, casting a Diplomatic Escort and a Lesser Gargadon. The Gargadon was big enough to worry Terry, so Terry killed it with his Arms Dealer at the end of Mike's turn. Terry had been slowly whittling away at Mike's life total with the Fiend and some other attackers, and Terry put Mike down to three life with a Rhystic Siphon. However, things rapidly shifted in Mike's favor when Mike played a moderately good card: Two-Headed Dragon! This left Terry with some time to contemplate his fate. He played an Agent of Shauku, hoping to take out some of Mike's creatures with his own during creature combat. Mike, of course, was pounding Terry with the Dragon, and also attacked with the Laccolith Grunt. Since Mike could kill Terry with the Dragon (he had enough mana to pump it up) if Terry didn't block the Grunt, Terry had no choice but to block the Grunt, and Mike then killed Terry's Agent of Shauku with the Grunt's activated ability. Terry had a turn to draw an answer to the Dragon - but didn't, and Mike won the next turn.

In the end, this match could have been summarized as "Mike's bounce beats Terry's unseen bombs."