Gabriel Nassif, holder of seven Pro Tour Top 8 finishes, among them a win, did not know what to play. Even on Thursday afternoon, he was agonizing over his list of decks to play. In the end, Nassif used Floody Friday to assemble a red-green-black aggro deck. "I have played a few games with it, and I liked it," said the pro, admitting that he hadn’t tested the deck thoroughly.

By contrast, thorough testing is a trademark of Guillaume Wafo-Tapa, creator of Dralnu du Louvre and winner of Pro Tour–Yokohama. He had taken a detour from his typical control decks for this tournament, illustrating the widespread belief that control alone is just not going to cut it in Valencia.

Guillaume won the die roll and led off with Snow-Covered Island. What exactly hid behind the foily glint of a Coldsnap snow Island, no one knew.

Nassif did not hold his cards close to his chest, unrolling Bloodstained Mire into Kird Ape on turn one. Dark Confidant, another Kird Ape and Tarmogoyf joined Nassif’s board soon after. Guillaume had just a Sakura-Tribe Elder.

When a couple of Forests had joined Guillaume’s board, he finally showed his allegiance: Tapping

, he played Heartbeat of Spring, followed by Early Harvest and Mind’s Desire for three. Sakura-Tribe Elder, another Early Harvest and Cunning Wish revealed themselves. Nostalgic Dreams followed, and Mind’s Desire stormed up to the plate again to reveal many, many cards, among them Fact or Fiction, Gifts Ungiven and another Cunning Wish. Brain Freeze from the sideboard ended the first game of Pro Tour–Valencia in Guillaume’s favor. 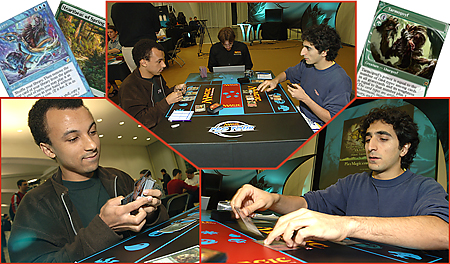 Two renowned French players meet in Round 1.Nassif was determined not to be steamrolled by the combo again. Fetchland into Blood Crypt took 3 life from him but enabled a first-turn Duress, revealing Cunning Wish, Cunning Wish, Sakura-Tribe Elder, and Moment’s Peace among lands.

Nassif decided to get the Peace into Guillaume’s graveyard, cracked another fetchland into an untapped Ravnica dual land (it just hurts) and ran out Tarmogoyf. Holding back on the beater, he decided to use Cabal Therapy to dispatch Guilalume’s toolbox of two Wishes. Mogg Fanatic took out the Speedbump-Tribe Elder, and a 4/5 Tarmogoyf started what he does best: Beating down.

Nassif was determined not to let his advantage slip. Molten Rain on Island kept Guillaume off double blue, and an attack with Tarmogoyf and Treetop Village took Guillaume to 9. In preparation for the final punch, Nassif looked to Cabal Therapy. Guillaume responded with Gifts Ungiven, needing something, anything, to buy himself more time. Island, Forest, Moment’s Peace, and Deep Analysis plunked Nassif deep into thought.

With the Therapy still on the stack, Nassif gave Guillaume Deep Analysis and Forest, only to immediately discard the Analysis with his Therapy. Guillaume flashed it back next turn, trading 3 life for two cards and now facing lethal damage on the board with Moment’s Peace in his graveyard. Time, again, was all he needed, and Moment’s Peace could provide at least a brief respite.

But other than time, mana was also at a premium for Guillaume. Nassif took out Wafo-Tapa’s only Island, forcing his fellow countryman to pay the full price for Search for Tomorrow to get a replacement. Another Moment’s Peace prevented Guillaume from dying, and Guillaume then emptied his hand for a desperate last attempt. He untapped his lands with Early Harvest, played a zero-mana artefact, Engineered Explosives, to boost the storm count, and tapped out for Mind’s Desire. The first flip revealed Gifts Ungiven, over which Guillaume agonized before deciding that, yes, he wanted to get Cunning Wish, Gifts Ungiven, Fact or Fiction, and Revive out of his library.

With no cards in his hand, and no mana left untapped, there were still two flips to go. An Early Harvest from the top would give him at least mana to play the Revive and Cunning Wish that Nassif had given him, but the two players smiled when Guillaume revealed nothing relevant and went on to Game 3.

Already, the feature match area was lined with spectators (among them 2006 Rookie of the Year Sebastian Thaler, who indicated that he had won his first match). In a format as fast as Extended, we expect to see many pros among the spectators, since quite a few of them should be done with their rounds with time to spare.

Nassif kicked off Game 3 with a mulligan on the draw, and was happy to reveal a Leyline of the Void in his starting hand. His Dark Confidant was hit by a Remand, just like Molten Rain a turn after. Guillaume was buying himself the quintessential commodity, time, but Nassif was set up well to deny him just that. Dark Confidant on the second try, Seal of Primordium, then Duress. Guillaume clearly loved his Remands, as the third one in this game delayed the Duress for nary a turn. Nassif just played Overgrown Tomb and took Early Harvest out of Guillaume’s hand (leaving Mind’s Desire, Cunning Wish and 2 Deep Analysis), destroyed an Island with Molten Rain and passed the turn.

Up to this point, Nassif was already down to 14 life from his own painlands and fetchlands. As Treetop Village was ready to start equalizing the score, and Nassif opened a barrage of two Grim Lavamancers, Guillaume had a timely Fact or Fiction. EOTFOFYL, right? Not quite, but Nassif was facing a pile of Heartbeat of Spring, Cunning Wish, Early Harvest, Forest and Sakura-Tribe Elder. With Seal of Primordium on his side, Heartbeat shouldn’t have worried him much, especially since Wafo-Tapa was stuck on three Forest and one Island.

Nevertheless, it was painfully apparent by just looking at the board that Nassif had to invest much more energy into a win here than Wafo-Tapa, who’d just waltz through the combo once he reached breaking point. Nassif split Heartbeat and Cunning Wish against the rest, and Guillaume took the mana pile with a Cunning Wish as added bonus—for now.

Nassif’s Confidant revealed Incinerate and took him to 8. Guillaume was on 17 with seven lands in play, a comfortable position to be in; enough mana to go off and a solid chunk of life between him and death. And Nassif knew he had to get Guillaume before long or die.

Tarmogoyf promised to be a turbo boost for the damage race. Guillaume, though, grabbed Early Harvest with his end-of-turn Cunning Wish, reckoning that Nassif just couldn’t kill him in time despite having a full board. Wafo-Tapa was at 13 from Lavamancer activations, and Nassif counted up his potential damage. Seeking to finish the match now, he put everything but his Treetop Village in the red zone. Guillaume calmly tapped three for Early Harvest, made a lot of mana, played a second Early Harvest, fetched Hunting Pack with a second Cunning Wish, and put four 4/4 blockers in the way of the two Lavamancers and the Tarmogoyf. Nassif cracked his Seal of Primordium and killed his Leyline to get cards in his graveyard, but still couldn’t save the Tarmogoyf. Nassif was left with just a Dark Confidant and a Treetop Village against two 4/4 beasts—further resistance proved futile.