Round 1: Toshiki Tsukamoto vs. Hisaya Tanaka 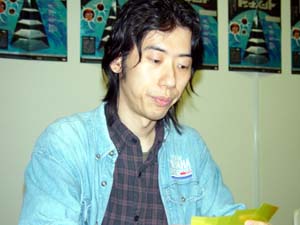 Tsukamoto was not only the first Japanese National Champion, but has held the title on two occasions. He had quit Magic for a while, but now he's back and looking to reclaim the tournament that once belonged to him. Hisaya Tanaka came in fourth at this tournament last year, and was able to play on the national team as an alternate when Toru Maegawa couldn't make the trip to Berlin. He's playing control white, while Tsukamoto is running Goblin Bidding with Obliterate, splashing for Read the Runes in maindeck, and March of the Machines in the sideboard.

Both players mulliganed down to five to start. Interestingly, they didn't resolve their mulligans in order, as Tsukamoto simply shuffled back hands each time Tanaka did the same. Tanaka's five card hand contained no lands, and Tsukamoto played Sparksmith. Tanaka finally had a plains and used it to bring out Leonin Elder, which quickly died to the Sparksmith. Tsukamoto followed with Goblin Sharpshooter, and on the following turn had a Warchief and Piledriver. With only one land, Tanaka was in no position to put up any resistance.

Tsukamoto played Skirk Prospector, and Tanaka used Chrome Mox to play a morph creature on turn two. Tsukamoto summoned a Sparksmith, and Tanaka's morph flipped over to reveal an Exalted Angel, which came over for damage and gave Tsukamoto's Goblins quite the uphill battle to overcome. He played a Warchief and attacked with his team for four, and the Angel cracked back once more, followed by Dawn Elemental. Tsukamoto played two more Goblins and ended his turn. He now had five, and was able to shoot down the Angel with Sparksmith. The Elemental still got through for three damage, and Tanaka dropped Worship onto the table. Tsukamoto swung back with his team, then sacrificed his Goblins to the Prospector, using the Sharpshooter to deal a point with each one that headed to the graveyard. He used this mana to cast Obliterate, which cleared the board and took care of the Elemental/Worship problem. He had enough mana left to play Goblin Sledder, and it seemed that Tanaka might be in trouble. However, he bounced back, drawing into mana sources and playing True Believer to get Worship working once more. A turn later, Tsukamoto conceded. 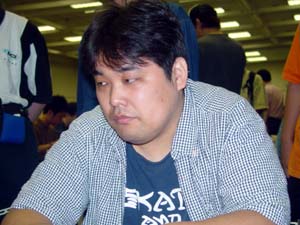 Tanaka played Leonin Elder, and Tsukamoto had a Sparksmith. Tsukamoto cycled a Gempalm Incinerator to kill the Elder and draw a card, and when he attacked with his Sparksmith it fell to Wing Shards. Tanaka then played a morph creature, and Tsukamoto summoned a Warchief, attacking for two. The morph became Exalted Angel, coming through for four damage. Tsukamoto played Siege-Gang Commander, and sent his team of Goblins in for seven. After some thought, Tanaka attacked back with the Angel, and played Dawn Elemental. Tsukamoto cycled an Incinerator to kill the Angel, and attacked with everyone. The Elemental blocked the Commander, and Tsukamoto let it die without sacrificing it, since he wanted to have mana available for the Read the Runes in his hand. Tanaka attacked with the Elemental and played Worship, passing the turn with confident body language. On end step, Tsukamoto cast Read the Runes, likely looking for Obliterate. He didn't find it, and Tanaka improved his side with True Believer, followed by Silver Knight. This was enough to convince Tsukamoto to concede.