Round 1: Toshiki Tsukamoto vs. Koichiro Maki Koichiro Maki started off game one with several large creatures, summoning two Snorting Gahrs and a Silverglade Elemental to his side. Tsukamoto held him off for a few turns with an Oraxid and a Defender en-Vec, but he knew that the fading counters wouldn't last for long. Tsukamoto used both of his creatures to block the Elemental, but Maki had a Flaming Sword. Tsukamoto prevented four points of first strike damage, exhausting his Defender, and Maki sacrificed a Spore Frog to keep the Elemental alive. 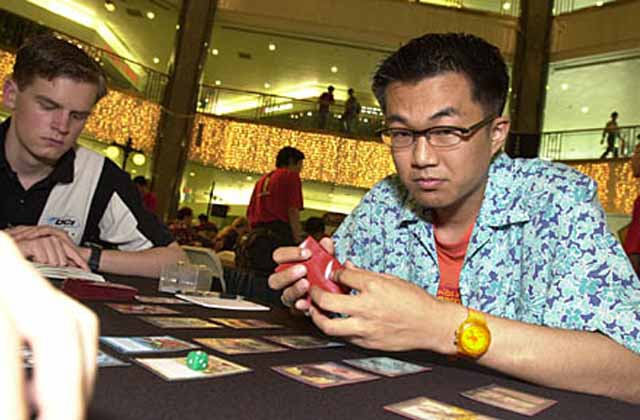 Tsukamoto used Dominate to take control of one of the Gahrs, but he had no answer for the powerful Elemental. A Diving Griffin and Withdraw bought him some time, but soon he scooped up his cards.

Maki was no longer dominant in the second game, as his two Pygmy Razorbacks were no match for Tsukamoto's Stinging Barrier and Flowering Field. Maki had a Scoria Cat in hand that would put a quick end to the game, but unfortunately he was stuck at four land. His Razorbacks were pinged away, and his Ridgeline Rager was countered with Rethink. 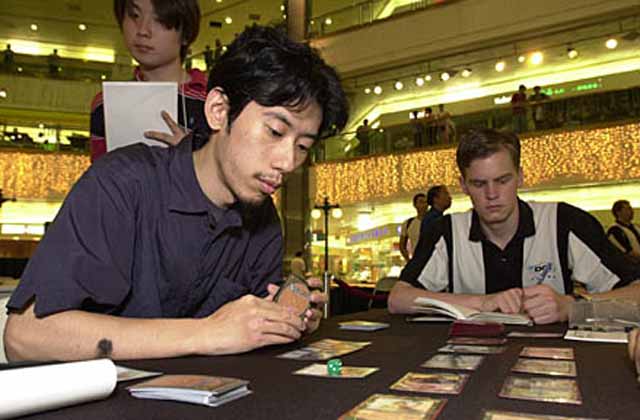 Drawing in his breath, Maki tapped the top of his deck and picked up the fifth land he needed. He played the Scoria Cat and immediately began to attack. Tsukamoto was down to six life and tried to use a Trenching Steed to save himself. But Maki played Panic Attack on all of Tsukamoto's blockers and tapped the rest of his lands, sending his Cat to a decisive 2-0 victory.