As these two veterans shuffled for the event's opening round of play, I asked if they had managed to practice the new format much. Each grinned a bit sheepishly and muttered something along the lines of, "Well, not that much, no."

That said, a lot of the practice they did do was actually with each other. This came up as soon as turn two, when Rogier Maaten player out a Bosk Banneret. Frank Karsten let out an agonized groan as soon as the Treefolk hit play. "I knew you were drafting that deck!" Rogier smiled serenely while Karsten continued grimacing, eventually deciding to take the tree down with a Lash Out. "I know that deck you like to draft, and that guy has got to go." 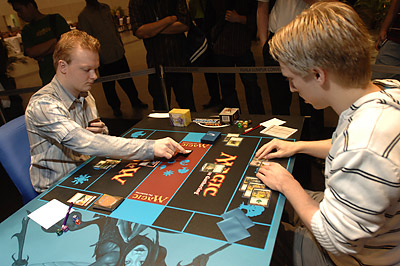 Frank Karsten brings a cool analysis to the table. Rogier Maaten brings a giant pile of fat. It looked like the right move, because while Karsten began developing his side of the board with reasonable creatures like Moonglove Changeling and Inner-Flame Igniter, Rogier just kept playing out Swamps and Forests and passing the turn back. On the fifth turn of this Karsten chuckled but also clearly suspected something was up because this time he didn't send his guys immediately in. After some brief thought he did send in the team and, as it seemed Karsten had guessed, this time Rogier had a flash option, which turned out to be Briarhorn.

Pointing out that this seemed like a reasonable choice, Karsten answered it with another Lash Out to drop him before the pump resolved. Battlewand Oak for Karsten won the clash over Rogier's Swamp, and this time the whole crowd chuckled along with Karsten when Rogier, who had nothing in play but land, declared he'd be keeping the land on top. Sending the turn back, Karsten exulted. "I knew that Banneret had to go!"

Dropping his new Swamp, Rogier played out a very impressive Orchard Warden, eliciting another groan from Karsten, followed by "I knew it. This is how it starts!" Rogier just smiled, looking quite relaxed despite the four to one creature disadvantage on the board and dropping to 9 life after the Moonglove Changeling came in. Everything else on Frank's team, being merely reasonably sized and not having deathtouch, was forced to stay home and watch.

Untapping, Rogier thought just briefly and then decided to send the Orchard Warden right into the red zone, eliciting more groans from Karsten who knew exactly what that attack meant. Based on his next reaction, it was actually worse than he feared, because the next guy out for Rogier turned out to be Oakgnarl Warrior! Another grimace from Karsten as he adjusted his friend's life total all the way up to 16.

Karsten continued making reasonable creatures, this time with a Game-Trail Changeling, but now Rogier was cooking with gas. Judging by the size of his creatures, it was all bacon on the grill for this team as he continued piling an avalanche of fat onto his side of the board, gaining obscene amounts of life in the process. He even had a Bog-Strider Ash for even more potential life gain. For his next turn it was another Bog-Strider Ash (going to 20) plus Woodland Changeling, gaining 2 life off of each of the Bog-Striders (since it's a Goblin) and then another 2 off the Warden (since it's also a Treefolk).

Karsten, now at 16 and rapidly falling behind on the arms race, had to switch to defense and pass the turn back. Things continued this way for a couple more turns, including a devastating Dauntless Dourbark (gain 9 life thank you very much). Facing death on his next turn Karsten shrugged and shoved all his guys into the red zone. "You figure out the math." As Rogier moved his various fatties about to find the optimal blocking scenario it was clear he was in no danger whatsoever. When the smoke had cleared Rogier still had a combined power and toughness of fifty-five on his side of the board. As Rogier was adding all that up Karsten joked that he also had a pretty good amount of power on the board, but the real issue at this point was life. Sitting at 30 after the attack Rogier was doing just fine, whereas poor Karsten was down to just 4. Just like that it was all over and we were off to Game 2.

This time Karsten got to put some critical early pressure on, leading with Adder-Staff Boggart, but lost the clash to a Dauntless Dourbark, which elicited two very different versions of "ooh" from each player. Rogier had an Elvish Warrior to hold the ground, but Karsten put an end to that with Nameless Inversion, knowing that he had to get the damage in as quickly as possible before Rogier's fat factory could get fully cranked up. 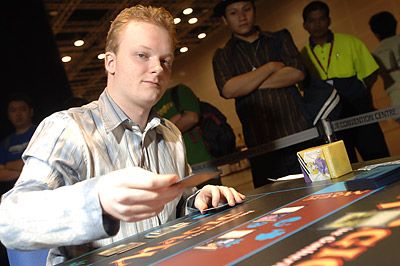 Karsten does his best to play lumberjack...Caterwauling Boggart made this plan look even better, and though Rogier was able to get a 5/5 Dourbark into play he was down to 12 after the Goblin swings, and then Veteran's Armaments plus Moonglove Changeling came down to finish out the turn, putting Rogier way back on his heels. Needing something to get things going, Nightshade Schemers was the best he could do.

In what looked like the critical turn, in came the Karsten team. Going for the best combat he could get, Rogier decided to double block the Adder-Staff Boggart. Briarhorn came out for Karsten to pump an unblocked guy and suddenly Rogier was down to just 2.

Bog-Strider Ash joined the table to give Rogier a new second blocker but with just 2 life and the Caterwauling Boggart making blocking difficult, things looked grim. Amazingly, things weren't over yet however. When Frank sent his team in for the killing blow Rogier's last two mana launched a critical Pack's Disdain on the Caterwauling Boggart, allowing the Dourbark to block the equipped Briarhorn and the Bog-Strider to trade with the deathtouch changeling. With just one card left in hand for Karsten and Rogier ready to plop out an Oakgnarl Warrior next turn, somehow this game looked not just stabilized but perhaps outright ready to win.

Rogier verified that Karsten had just one card left and then asked what everybody was wondering: "So, what is it?" Karsten smiled and flipped over a Lash Out, pointing it at the Dourbark for the final damage needed to take out the massive beater. Far more important, however, was the clash, as Rogier didn't have the life to survive if he lost. Having shown a deck packed to the brim with massive creatures he knew he had a pretty good chance, but everything was riding on this reveal. Each player flipped his card, and it turned out to be Wren's Run Packmaster for Karsten and... just a Swamp for Rogier. It was a wild turn that saw the lead go back and forth multiple times across just one attack phase, but with that it was all over and time for the decider. 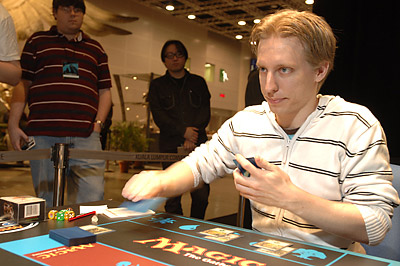 ...but Maaten's roots run deep. Both players took mulligans to start the final game. Turn two actually turned out to be the most critical of the game as Rogier was able to play out a Bosk Banneret, and this time Frank had no immediate answer and also no creature for either of his first two turns to get the pressure on. For turn three Rogier had Dauntless Dourbark. He spent the next couple turns stuck on three land but thanks to the banneret he was able to continue flooding the table with fat as he clogged the ground up with a Bog-Strider Ash and then a Battlewand Oak.

Karsten was down to just a Changeling Berserker and had to keep it back on defense, but Rogier finally found another land, and this one was a Forest, allowing the Dourbark to smash in for 6, dropping Karsten to 9. Karsten played out land number five and sent the turn immediately back. Rogier did some math and then decided to send the whole team in for maximum smashing. Karsten had a Briarhorn, but once the blockers were declared and Rogier starting adding up the damage Karsten noticed Rogier counting the Dourbark, which he had blocked. Doing a double-take, Karsten declared "That guy has trample too?! Wow!"

Rogier, ever the genial assassin, grinned right back. "Yeah, I did the same thing with that guy for a long time. I had no idea he had that ability too on top of everything else he does." Grinning right back, Karsten pointed out "Okay, well, I wasn't winning this one anyway, for sure."