Round 1: William "The Ferrett" Steinmetz vs. Brad Klabik 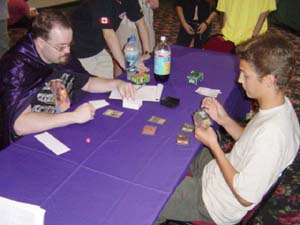 This is what Brad Klabik told me to write as soon as he sat down. Brad was not the picture of confidence for his feature match.

I told him he was playing The Ferrett, who got the obligatory internet writer selection that round 1 feature matches have. Brad told me his magic accomplishments amounted to a 5-2 finish at a PTQ where one of his opponents misrecorded the match slip. (so technically a 4-3)

The Ferrett is known to the internet community as the editor of starcitygames.com, and came to the table dressed in an honest-to-goodness cape. A sumptuous purple velvet number. I bet you thought The Ferrett was just a clever nickname. It's actually his first name. Who knew?! The Ferrett played a very standard looking blue-green threshold deck that has been played since the release of Judgment. He also brought a very large cup of cola caffeine to the table with him. So large I had to ask him to move it so that I could watch the match. 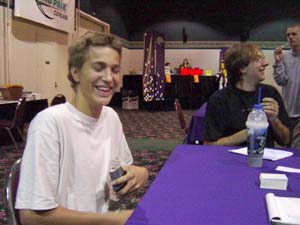 The Ferrett barely noticed losing the Mongrel. He played a Mongoose the next turn, which he later told me he had in his opening draw and forgot to play. He followed up the next turn with another Mongoose, and by the time Brad found a blocker, Ferret had Wonder and finished him off.

The next game both players got their turn-two Mongrels again. Brad missed a land drop, but fourth turn he dropped an Elephant Guide and got in for five. Ferrett developed his board with a Mongoose and a Werebear. With him now tapped out, Brad dropped another Guide on the Mongrel to go in for 8. Ferrett decided to chump with Mongrel since he had six cards in his graveyard. The next turn he sent the Mongrel and Rootwalla back to the hand with an Aether Burst for two (thanks to his turn one Careful Study). Brad got to replay his creatures, but The Ferrett followed up with a Phantom Centaur and Standstill. Brad decided to break the Standstill right away with his own Centaur. The three cards got Ferret to Wonder, though, and his flying team made quick work of Brad.

And there was much Ferrett-fan rejoicing.

Final Result: This match was sad. The Ferrett won 2-0. The end.