Round 1: Your Move Games vs. Godzilla 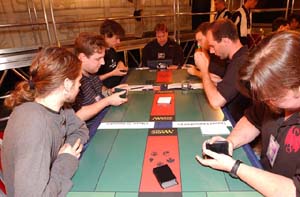 Your Move Games vs. Godzilla

Two for the best teams in the game squared off in the first round. Team Godzilla, has claimed ach of the last two constructed Pro Tours thanks largely to the English playtesting brain trust that meets at Hampton Court Palace. Three of those Englishmen - 2000 national champion Ben Ronaldson, 2001 national champion Ollie Schneider, and two-time PT Top 8 finishers Jon Ormerod took on the wily veterans from team Your Move Games. Darwin Kastle, Dave Humpherys, and Rob Dougherty won the first big team event - Pro Tour D.C. - and the most recent one - Grand Prix Columbus.

There's been a lot of speculation about the metagame for team sealed deck. Lots of teams develop specialist at playing each color combination and so there's a strong temptation to give players the sealed deck that most resembles the deck they usually draft. Since players have to sit in the same seats on day 1 that they plan to draft in on day 2, this establishes a metagame that the top teams can use to their advantage. Seat A is usually black-red in draft, seat B is usually blue (though sometimes green) and seat C is usually green (though sometimes blue).

This matchup was particularly interesting because both teams tried o play the metagame, but they did it in exactly the same way and thus they wound up with three mirror matches. Both teams shifted their black-red deck into the middle seat and put their multi-color green deck in seat A. That left a pair of blue-white decks duking it out where green decks "normally" sit. The players joked about this once it became obvious and wondered if everyone else had done the same shift and if they'd be playing mirror matches all day long.

Dave Humpherys's Tsabo's Assassin met with loud complaints from Schneider, who isn't exactly a quiet person, but the Assassin wasn't fast enough and Schneider claimed a quick 1-0 lead for Godzilla. A timely Rushing River from Ormerod cleared a path through Dougherty's defenses and gave Godzilla a lead in that match as well. Darwin Kastle had no answer for Ben Ronaldson's Spiritmonger and Godzilla completed a sweep of game ones.

Surprisingly, the Dave Humpherys match was the fastest one. Playing red black instead of his usual blue had to help the notoriously slow Humpherys. One couldn't help but wonder if the four draws that eliminated them from contention at last year's team Pro Tour led YMG to the particular sealed deck configuration they chose. Humpherys and Schneider traded creatures and removal of a number of turns but in the end Humpherys' Plague Spitter was the MVP. It took out Ollie's last two creatures and soon thereafter took out Ollie and sent that match to game 3.

Ormerod had a very aggressive draw for a blue-white deck in game 2: tapper, Spirit Weaver, Shoreline Raider, Living Airship, and Lashknife Barrier put Dougherty on the defensive from turn 1. Ordered Migration bought him a few turns and he had Ertai's Trickery ready to try to stop the fatal Rushing River. However, Ormerod had a janky sideboard card of his own - Jaded Response - and the first match went to Ormerod and team Godzilla.

Ronaldson slaughtered a poor unsuspected Hunting Kavu with a surprise Fleetfoot Panther on the third turn of his second game with Kastle and was the aggressor early. However, he drew into a serious land glut and Kastle was able to recover and stabilize. Meanwhile the red-black mirror continued to revolve around "broken" removal spells. Schneider pulled off Tsabo's Decree naming "Kavu." He only got two but that left Humpherys with zero creatures to use with his Keldon Necropolis. Humpherys drew two off the top, but Plague Spores cleared a path for Schneider and got the Necropolis off the table.

One handshake later, Ronaldson was breathing a sigh of relief. "The pressure's off, then!" He was holding on desperately in game 2, but with the pressure off he went ahead and conceded it, preserving15 minutes for a third game that wouldn't affect anything but their tiebreakers. Ronaldson then won the "fun game."