It is the final stop on the 2010 Pro Tour circuit before the World Championships: Amsterdam. In addition to that honor, it will go down in the history books as the largest individual Pro Tour ever held, with a record 457 competitors sitting down to battle on Friday morning. Two of the absolute fiercest squared off against one another in the Feature Match area in Round 1: Pro Tour–San Juan champion Paulo Vitor Damo da Rosa, and the reigning Player of the Year, Yuuya Watanabe.

The Japanese star Watanabe won the die roll but had to start with a mulligan. That mulligan turned into a second, while the Latin American star Paulo Vitor watched, content with his seven. 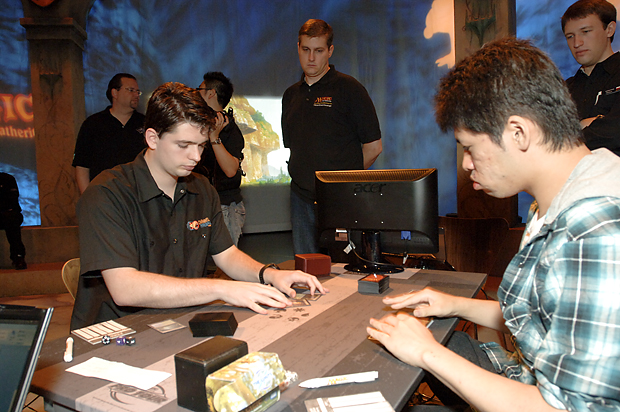 Grove of the Burnwillows kicked things off for Yuuya, while his opponent used a Misty Rainforest to find Murmuring Bosk, then tapped that to cast Treefolk Harbinger. The 0/3 fetched up a Doran, the Siege Tower and marked a significant early turn for the Brazilian Pro Tour champion. Watanabe tried to make up for his early card disadvantage by casting Preordain. Paulo Vitor cast a second Treefolk Harbinger on his second turn, summoning forth a second copy of Doran to the top of his deck.

Yuuya drew for his turn, but passed without playing a land. Damo da Rosa attempted to cast his first Doran, but Mana Leak from his opponent shut the legend down cold. That stocked the graveyard for Yuuya's Tarmogoyf, which entered the battlefield as a 4/5 thanks to the four cards in the graveyard, each a different card type. Thoughtseize from Paulo Vitor revealed a hand of Preordain, Punishing Fire, Lightning Bolt, and Time Warp out of Yuuya, and the Brazilian thought carefully about which card he should send to the bin. Lightning Bolt was the call, and his second Doran of the game resolved, making his twin Treefolk Harbingers effectively 3/3s while Yuuya's 'Goyf became a virtual 5/5.

A second Tarmogoyf entered the battlefield for Yuuya, but it turned out to be worse for him than not casting it: his opponent had Maelstrom Pulse, and got to wipe Watanabe's side of the battlefield in one shot, bashing for 11 afterwards with two Treefolk Harbingers and Doran. Watanabe untapped for a final turn and cast Preordain, but when he didn't find much help there the players headed to the second game.

Preordain kicked the second game off for Yuuya Watanabe, while Paulo Vitor Damo da Rosa started just as he had in the first, using a fetch land to find Murmuring Bosk and casting Treefolk Harbinger to fetch up Doran, the Siege Tower afterwards. Both players resolved second-turn Tarmogoyfs, which hit the battlefield at 2/3, but Yuuya missed a third land drop and had to pass without casting anything. Doing so allowed him to Mana Leak his opponent's attempted casting of Doran, the Siege Tower, but Paulo Vitor fired back with a second copy of the Lorwyn Treefolk. Like a true control mage, Yuuya was ready with a second Mana Leak.

Not wanting to sit back spinning his wheels and let Watanabe draw out of his mana screw, Paulo Vitor cast Slaughter Pact to take out the Japanese pro's Tarmogoyf. He then attacked with his copy of the Future Sight rare, by that point a 4/5. Like the pro that he is, Damo da Rosa placed a six-sided die on top of his library to help him remember to pay the upkeep from his Pact, and passed. 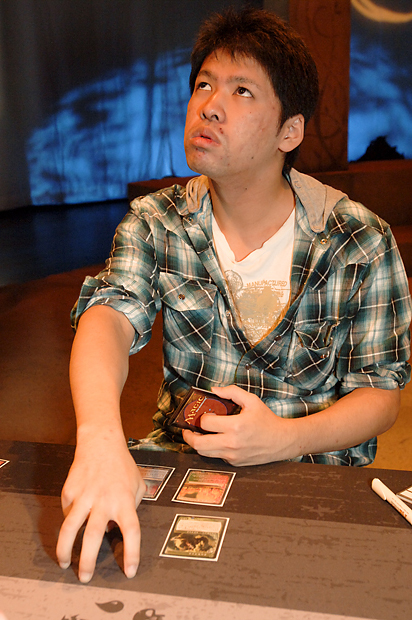 ... Recalculating.Still short on lands, Yuuya cast a Ponder. That yielded a Misty Rainforest, but no other plays from Watanabe, who passed the turn. Damo da Rosa dutifully paid the upkeep from his removal spell, then attacked with his Tarmogoyf and passed. His opponent paused the game before untapping, however, ticking out calculations on the table. Whatever he was thinking, Yuuya determined the correct play was to crack his fetch land for an Island.

Untapping, the Player of the Year drew and played Cascade Bluffs. He ran some more calculations, then passed the turn. Paulo Vitor activated a Treetop Village and moved to attack, pausing as though he expected some type of response from his opponent. Watanabe allowed the creatures to turn sideways, then cast Manamorphose to make two red mana. That allowed him to use Lightning Bolt on the creature-land, then a Lightning Bolt and Punishing Fire to take out Tarmogoyf. Damo da Rosa dropped a second Treetop Village, then passed the turn.

Quickly untapping, Yuuya cast Countryside Crusher and seemed to have miraculously turned the game around. His opponent fired back with a Leyline of the Void, preventing the Crusher from getting +1/+1 counters, but took 3 as the Japanese player attacked with his red Giant before casting a second copy. Paulo cast a Loam Lion, then traded Treetop Village for one of the Crushers. Yuuya cast a Jace, the Mind Sculptor, and the Brazilian star suddenly found himself way behind. The planeswalker threatened to put his opponent light years ahead in card economy when combined with the filtering effect of the remaining Countryside Crusher on the table.

Still, Paulo battled on, hoping his deck would come up with some type of trick he could utilize to stay in things. Matters were exacerbated as his opponent came up with a third copy of Countryside Crusher, and Paulo Vitor could only draw, think, and pass. He fell to 1 as Yuuya crashed with both of his Crushers, using Jace to bounce his opponent's only blocker first, then when Watanabe revealed a Punishing Fire for the final points, Paulo conceded.

Putrid Leech made its debut in the new Extended format in the third game as Paulo Vitor Damo da Rosa started off aggressively by casting the proto-4/4 on his second turn. Yuuya Watanabe worked on sculpting the perfect hand, casting a Ponder, and Damo da Rosa made a curious play: he cast a precombat Tarmogoyf. The reason became clear as Yuuya cast Mana Leak to counter the powerful creature, leaving him tapped out. That cleared the way for Paulo Vitor to attack with his Leech, pumping it without fear of a Lightning Bolt or Punishing Fire swooping in to destroy it and ruining his fun.

A Preordain helped Yuuya continue sculpting his library and hand in an effort to keep up with the Leech, but Thoughtseize from his opponent spoiled Watanabe's plans in part. The discard spell revealed the Japanese player to be holding ... another Mana Leak, which countered and prevented Paulo from seeing the rest of what Yuuya had. Still, it left the Japanese player tapped out again allowing his opponent to attack him for 4 with the Leech before casting a second copy. That made the score 12-11 in Paulo Vitor's favor, though the round had gone long and the two were in danger of crossing the time threshold and potentially being stuck in extra turns; judge Dustin de Leeuw of the Netherlands leaned in to instruct the players to play faster.

Jace, the Mind Sculptor successfully entered the battlefield for Yuuya, and quickly moved to two loyalty in order to bounce a Putrid Leech back to his opponent's hand. The planeswalker did not last long, however, as Paulo Vitor quickly sent it on its way by attacking it to death with his remaining Leech. He then re-cast his first Putrid Leech followed by a Treefolk Harbinger which set up his next draw to be Doran, the Siege Tower. 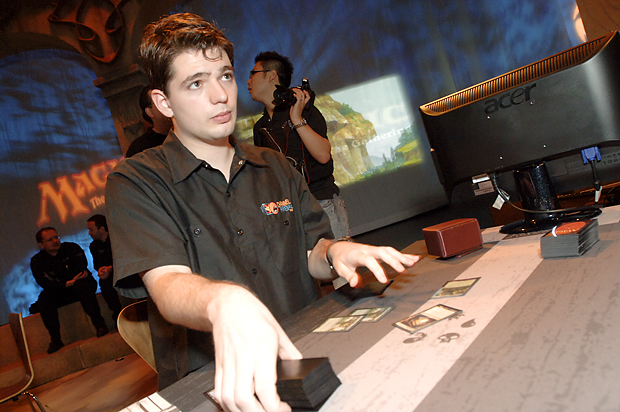 Facing down a hefty army, Watanabe worked on digging himself into some action. He cast a Preordain, but found nothing and scryed the cards to the bottom of his library. He gave no indication his draw from the Magic 2011 spell helped, simply playing a land and passing the turn rather than casting anything. Damo da Rosa considered his options momentarily before sending with both of his Putrid Leeches, opting not to pump. That dropped Yuuya to 7, but when the Brazilian tried to cast a Doran, the Siege Tower with the wrong colored mana he had to rethink the play. Ultimately he opted to cast Knight of the Reliquary, but had it countered by yet another Mana Leak from his opponent.

Without much life left with which to maneuver, Yuuya Watanabe needed to find some help and fast. He untapped to start figuring out a plan of action, but judge Matteo Callegari of Italy leaned in to inform the players they had reached time in the round. Watanabe would finish his turn, then they'd have five more turns starting with Paulo Vitor. Countryside Crusher entered the battlefield for the Japanese player's blue-red-green deck, and he passed.

Taking the first of the five additional turns, Paulo Vitor Damo da Rosa cast Path to Exile targeting his opponent's creature. He then activated Treetop Village and attacked with the creature-land and both of his Putrid Leeches. Yuuya checked the life totals and, realizing he was dead, extended his hand in defeat.