Patrick Chapin has only picked up one loss so far at Pro Tour Paris, and it was against Ben Stark at the end of Day 1. He would be hoping for revenge in Round 10, as he played against the still undefeated Stark here in the second draft of the Pro Tour.

For the second time, on the weekend, the winner of the die roll elected to draw. “I hate it when I play good players,” reprised Chapin with a smile, or possibly a smirk.

Groundhog Day ended as early as turn one though, when Stark played a turn one Spikeshot Elder, showing that he wasn’t on the infect plan that he’d run on Thursday in draft. The Elder got one hit and a ping in before falling to Dispense Justice. Chapin was then able to deploy first a Riddlesmith, then an Iron Myr, that drew him a card, and caused him to discard Glint Hawk. 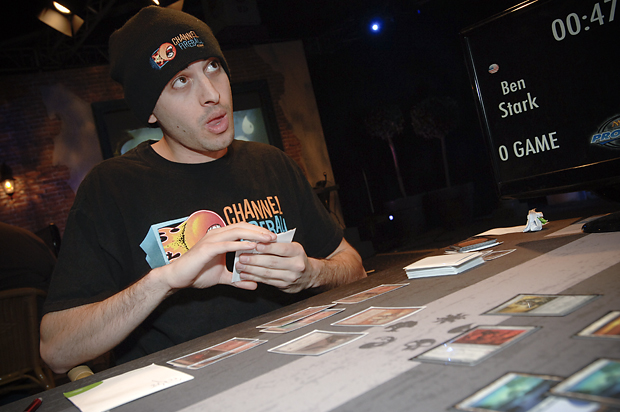 Ben Stark tries to put on his thinking cap and game face at the same time; the results are mixed.

Stark’s plan was not intricate, but there was power there. He led with Blade-Tribe Berserkers, and while they were held off by a Rusted Slasher from Chapin, he showed that he had a Cerebral Eruption to deal with Chapin’s team. The first time around, the Eruption hit a land. Stark had a careful think before casting it again. He instead elected to play Arc Trail, to off Chapin’s Myr and Riddlesmith. Chapin floated mana and cast a Darksteel Sentinel, stymieing Stark’s attack plan.

A Shimmer Myr came down for Stark as a blocker, but was soon back in his hand, along with the Berserkers, thanks to Quicksilver Geyser from Chapin, who eyed the board intently, while resting his hand of two cards on the table.

Stark wasn’t willing to commit anything further to the board, passing with six lands up, which led to only a Sentinel attack from Chapin. Patrick didn’t want to trade with Shimmer Myr, meaning that his Rusted Slasher would hold back. Patrick cast a Chrome Steed, to which Stark responded with Shimmer Myr. The Steed was sacrificed to regenerate the Slasher in the face of Cerebral Eruption. It wasn’t until Shatter came along (in response to an Ichor Wellspring) that the 4/1 finally died.

Ben was in rough shape in the face of Darksteel Sentinel, which just kept running in. He tried to race with a Flameborn Hellion, but when Corrupted Conscience drafted the 5/4 to Chapin’s team, it set up attacks that took Stark out of the game.

Chapin smiled as he shuffled up for the second game.

“For reference, [Jon] Finkel is at the top of the list,” he said, referring back to his list of great Limited players who had taught him about how the game worked. “I’m pretty sure that he’s the greatest Limited player of all time. [Mike] Turian is perhaps number two.”

The second game started with beats from Chapin, who had a turn-two Sunspear Shikari, and turn three Auriok Replica. A Rust Tick from Stark briefly looked like a fine blocker, but Chapin cast a Leonin Relic-Warder to clear a path. Ogre Resister got hit by an Arrest, and Chapin continued to beat. 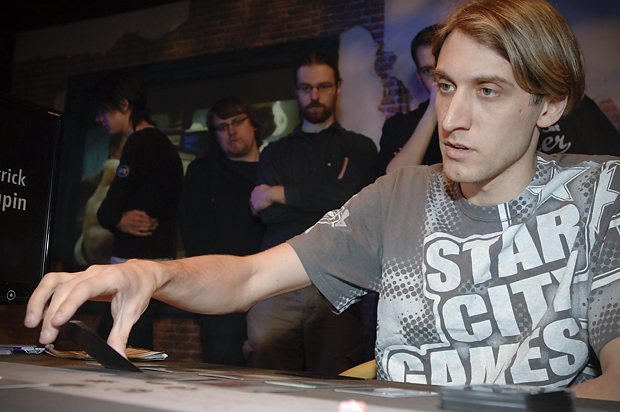 A dapper-looking Patrick Chapin keeps the pressure on.

Stark was on the back foot, passing the turn without a play. Wary of Shimmer Myr, Chapin sent in but held back his Relic-Warder. This proved a good play, as Shimmer Myr came out to trade with Sunspear Shikari. Even with this block, Stark went to 6. On his turn, Stark tried a post-combat Flameborn Hellion as a blocker, but it was all for nought as an end of turn Darksteel Sentinel was followed up by a main-phase Corrupted Conscience, easily ensuring that Chapin could exact revenge for his only loss of the tournament.