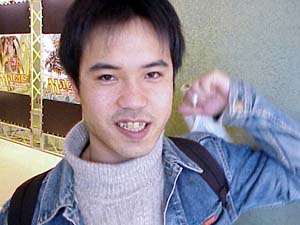 Lovre Crnobori is easy with a smile away from the table, but as soon as he sits down, he's all business. Osamu Fujita takes that concept of the game face one step farther, rarely shedding his trademark scowl. Crnobori is best known as one third of the Original Slackers and is looking to give himself a big individual finish. That goes double for Fujita, who just missed becoming Japan's first Pro Tour Champion at Amsterdam.

Fujita mulliganed his first hand, then stared at a two land hand that was short on action. After agonizing over it he decided to ship it back. He was rewarded with a landless five. He stayed on four. It hardly seemed fair that Crnobori got to stay on seven.

While Fujita played out Mountains, Crnobori busted out a Talisman of Indulgence. Fujita had Detonate handy. Crnobori replaced it, but had no third land. Fujita, unfortunately, had no play. Neither did Crnobori. After another turn of this Crnobori broke the monotony by ripping his third land and summoning Solemn Simulacrum, easing his mana woes. Fujita shrugged and played a Damping Matrix.

Arc-Slogger followed for the Norwegian, and Fujita's way rapidly deteriorated. He Fireballed Jens. Crnobori hit for four and replaced his robot. Finally, Fujita found a fourth land to make a Simulacrum of his own. Crnobori upped the ante with Furnace Dragon, leaving Fujita with just four mountains. He played another and made an Arc-Slogger.

Crnobori had a lot of mana at his disposal. He threw down two Electrostatic Bolts and a Pyrite Spellbomb to bust up the Slogger, then swung in and flipped the top cards of his library until Fujita was dead.

Fuita didn't have to roll over and play dead in the second game, since his opening grip was worth keeping. Both players started with Talismans and Crnobori used his to make a Chromatic Sphere. His lands were just Cloudpost and Blinkmoth Nexus. Fujita dropped a second Talisman and broke the Cloudpost with Molten Rain. Crnobori played another Nexus and was done.

After some thought, Fujita decided to get in with Arc-Slogger. Crnobori cracked his Sphere for black and Terrored the beast. He untapped and made a Jens, finally getting some semblance of a mana base. He gave it back to Fujita.

Fujita showed him another Slogger. Crnobori couldn't untap fast enough. Great Furnace made six mana and Duplicant let him reach across the table and steal himself a 4/5 body. Fujita dropped a Simulacrum and Echoing Ruin disposed of the Duplicant. Their robots traded in combat and Crnobori tried a real Slogger, but Fujita had the Shrapnel Blast to waste it. Sitting on three cards, Crnobori swung with his Nexuses. Barbed Lightning took down one and dealt three. 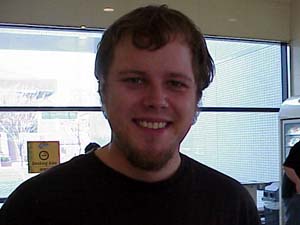 Fujita untapped an played another Simulacrum. Crnobori went one better with a Slogger. Fujita had no play. Another Duplicant stripped his lone defender and he fell to thirteen. Crnobori's Slogger got rid of a Blinkmoth that tried to stand in the way and with the Duplicant knocked Fujita to seven. Two Slogger activations and a Fireball finished it.