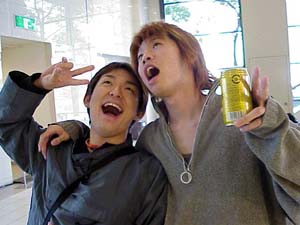 Katsuhiro Mori declared that he was retiring after Japanese Nationals, but like most Magic retirements it didn't last long. The former Rookie of the Year is back, playing in a Pro Tour in his home country. His return should make things interesting, as Mori already had a tremendous amount of success, and seemed destined to accomplish even more before abruptly leaving the game. Things won't be easy this round, however, as he's up against Yann Hamon, who has had a great run over the past few months including a Grand Prix win and a Pro Tour Top 8.

By turn two, Mori had out Chromatic Sphere, Ornithopter, Myr Retriever and Tooth of Criss-Goria. Hamon had an Arcbound Worker, and summoned a Ravager on turn two. Mori played Skullclamp to kill the Retriever, drawing two cards and getting Chromatic Sphere back. Hamon played a Stinger and a pair of Frogmites for free, and Mori played a second Skullclamp, killing his Ornithopter. He played a Disciple and ended his turn, facing down a big attack. Electrostatic Bolt killed the Disciple, and Hamon's team dealt seven damage. Oxidize destroyed the Ravager on end step, and Mori played a Ravager of his own, along with a Worker. The Worker died to Skullclamp, making the Ravager 2/2 and putting Mori ahead on cards.

With the Ravager posing a serious threat, Hamon just attacked with his Stinger for two. Mori played another Retriever and 'Clamped it, getting back Ornithopter. Just as it seemed that Mori was going to stabilize and let the card advantage carry him to victory, Hamon showed two Shrapnel Blasts. 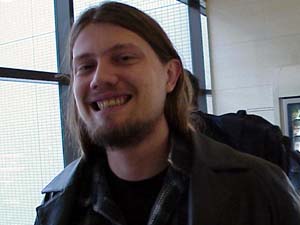 Both players started off with Workers. Mori killed his with Skullclamp, and Hamon played a Ravager along with a free Frogmite. Mori summoned a Retriever, killing it to get back the Worker and draw two cards before playing a Tooth for free. Hamon played a Disciple, Chromatic Sphere and an Enforcer for free, and attacked with his team, pumping the Ravager four times to bring Mori to nine after combat damage. On the following turn, Shrapnel Blast finished it.