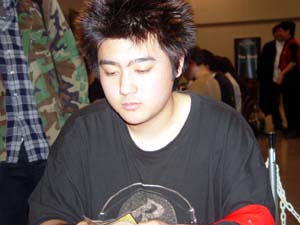 soon as I got to the feature match area, Olivier showed me his deck, which featured some very sparkly purple sleeves. He showed me that he had Bosh and Broodstar, although he thought that Neurok Spy may have been a better pick than the affinity powered flier. "If I have a choice between two cards like that, I'm almost always just going to take the rare." Even though he had some bombs, he also had his share of mediocre maindeck cards like Unforge, Krark-Clan Shaman and Override.

Katou had a second turn Talisman, and Ruel played a Myr with a loud "Anan…Go!" which got a big laugh out of the spectators. Katou's Yotian Soldier died to Detonate and Ruel's Cathodion was killed by Essence Drain. Ruel played a second Myr, and Katou summoned Pewter Golem. All this was happening at a lightning quick pace, as both players seemed to be having a lot of fun joking around with each other and exciting the crowd. Ruel summoned a 3/3 Broodstar, and Katou attacked with the Pewter Golem. Just then, Ruel showed me the Echoing Ruin he should have cast while Katou was tapped out. Luckily, Quicksilver Behemoth showed up to provide an answer. Echoing Decay killed one of Ruel's Myrs and another Essence Drain would have dealt with the Broodstar, but Ruel responded with Echoing Truth. The Essence Drain left Katou with only one mana untapped, allowing Echoing Ruin to destroy the Pewter Golem. From here, Ruel took the game. 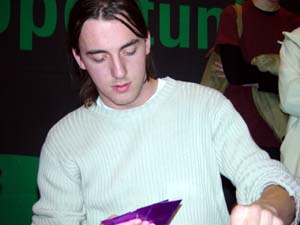 Katou had a third turn Dross Golem, and Ruel played Vedalken Engineer along with Cathodion. Mask of Memory went on the Golem as Katou looked for a trade, but Ruel bounced the Cathodion back after damage went on the stack with Echoing Truth. Katou summoned Grimclaw Bats, and his Yotian Soldier was countered with Override. Ruel attacked with the Engineer and Cathodion for four, and played a Krark-Clan Shaman along with Quicksilver Behemoth. Katou put the Mask on the Bats and got to work gaining some card advantage. Woebearer was another significant threat, and on the following attack it brought back Dross Golem. It came out for one mana, along with Nim Abomination. Echoing Ruin destroyed the Mask, and Katou's offense had been stopped, with Nim Abomination running into the Behemoth. Katou was now out of gas, and Ruel smiled as he drew Necrogen Spellbomb and made a black mana with the Engineer. He simply used it to play Broodstar, and drew a card rather than making Katou lose his only card. Bosh came out a turn later, and Katou conceded.