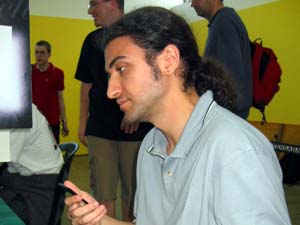 is what it's all about. The only two remaining players with a perfect record Jan and Matteo face of for the right to book a place in the top 8 right here and now.

Brodzak is packing Affinity while Cirigliano is using a very peculiar controllish Green-Blue deck with stuff like Crystal Shard. It might strange but it got him here.

Matteo wasn't too happy about his hand but he kept it. Jan came out in style with an extremelly old Ornithopter before dumping a second one, Arcbound Worker, Chromatic Sphere, Frogmite and Somber Hoverugard on his next turn.

Cirigliano shook his hand a played a second land. Out came another Worker and the dreaded Disciple of the Vault. Matteo fell to twelve. He pumped out Viridian Shaman to ice the Frogmite.

But Jan was in no mood to slow down. He played a second Disciple and sent his crew in. Matteo stared at the table, stared at his hand, sighed loudly and scooped.

Again Matteo wasn't a happy camper, but he kept his hand. His hand proved to be good enough for the first turns with Annul and Condescend preventing Brodzak from evolving beyond two lands and Welding Jar.

Two Thirst of Knowledge later (discarding two Crystal Shards) Cirigliano started locking up the table unleashing two Oxidizes and Tel-Jilad Justice. The Czech tried to fight back with Disciple of the Vault but he was clearly slipping into huge trouble.

The Italian tried to set up a recurring nightmare (pun intended) by playing Crystal Shard and Jan tried to answer with Terror on the Witness. Condescend made sure the Witness stuck around.

It might look like a Limited trick pretty soon it was dominating the table. The Witness bounced around working in two fronts: blocking and "regrowthing" stuff.

The Czech sat back and calmly watched his doom unfold. Coldly and smoothly the Italian set about destroying Brodzak's permanents. Finally he seemed satisfied and the Witness settled down on a different job: bringing Jan's life down to zero.

With recurring Thirst of Knowledge, Oxidize, Tel-Jilad Justice, Echoing Truth and Condescend... the rest of the game was purely academic. The only interesting thing was Jan Bordzak's facde while he was reviewing his opponent's graveyard before conceding.

Again the first turns were absolutely crucial. By the end of turn two Jan had only Frogmite as a creature. Matteo played Eternal Witness and got Oxidize back.

The Czech tried to push things with Ornithopter and Somber Hoverguard (also known as "problem for Green removal decks"). Cirigliano ignored for a while and used a second Witness to work the Oxidize again. 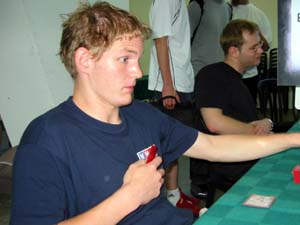 Crystal Shard showed up and the Hoverguard bounced back to Brodzak's hand. With only two lands the Czech would have a hard time keeping it on the table. He opted for Ravager but two Oxidizes later he was down to two lands and a Welding Jar.

The Italian was in control. He was so in control it was scary. Echoing Truth bounced Disciple of the Vault and Condescend (the last card in the Italian's hand) stopped Thirst for Knowledge. The Czech shook head and conceded.