Round 10: Alexander Witt vs. Rickard Österberg 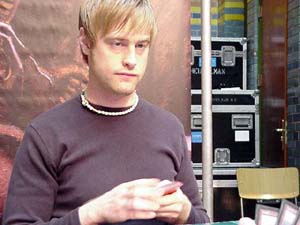 We have had Witt here before this weekend so lets just run through his introduction really quickly: he was the first player ever to win a Masters after grinding in. He was also quite generous with his prize money. Across the table a name you might recognize from last year's block season. Rickard Österberg won an Invasion Block Constructed Grand Prix in Warsaw.

Witt tried to sneak a Familiar through on the second turn but Rickard had the Counterspell for it, before untapping and dropping Psychatog. It seems the Dutch's greedy move had put him in trouble.

To make up for it he Recoiled the Atog, since Rickard didn't have a counter. Instead he answered with Fact or Fiction. Witt tried to set up for the long game by denying him the lands.

Österberg took the lands but lost two of them to a kicked Probe on the next turn. Again the Dutch was tapped out and the Swede was more than pleased to return the favour with another Probe. A Nightscape Familiar showed up on Witt's side but Rickard still had more draw spells to play starting with Fact or Fiction.

The Swede took the first pile. The Familiar nibbled away and Alexander tried to play Mr. Teeth himself. Ricard countered and the Dutch had no answer. The following turn we had a repeat of the play but changing sides: Rickard's Pyschatog was countered.

The game was all about jockeying for position and we had good sample of that on the counter war surround another kicked Probe attempt by Witt. Three counters later it was denied. Österberg followed that with another Fact or Fiction.

Pile one: Upheaval and two lands
Pile two: Fact of Fiction and Psychatog.

He took the second pile and tried a second Fact or Fiction but Witt would have none of that. Unable to get extra cards the Swede settled for playing his Psychatog. His graveyard threatened to dwarf his library but the annoying Nightscape Familiar stood across the table.

Recoil got rid of that and in came Psychatog. Slowly Rickard went down to one single card in hand and almost spent his whole graveyard to pump the Atog, calling Alexander Witt's bluff. The Dutch scooped.

A first turn Duress from Witt got Fact or Fiction over Probe, the rest of the cards being lands. So on the third turn he knew it was pretty safe to play his Psychatog. Rickard indeed didn't have a counter but he did have Familiar to stop the monster.

A few turns later he found a second Familiar and got it into play without problem. In fact his draws had been pretty good because when Witt tried to Probe him he had the perfect Circular Logic for it. 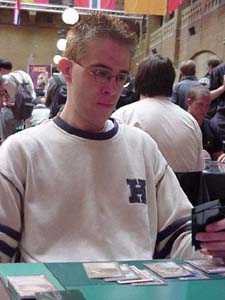 On the following turn he returned the favour, this time with success, dropping Alexander down to a single card in hand. The Dutch did have Psychatog in play but Österberg had control of the game. To further stall the table the Dutch played his own Familiar.

The four creatures enjoyed their little Mexican standoff and the two players settled in for the long game of "Draw-Go" as they fought for advantage. Rickard's first Fact or Fiction was a good example of how important getting extra cards is in this match. Four counters ended up in the stack before he got to flip five cards.

No one could resist Fat Moti at this point. Rickard took the first pile hoping to push through Moti for the flying win. He Repulsed the Familiar and went for it, much to the delight of Eivind Nitter in the crowd as the "old timer" resolved.

Witt blew his Coliseum looking for a counter and found one, losing Psychatog, Familiar and Unnatural Selection in the process. Still he decided he would rather protect the Selection still in his hand.

This way, and if he could play it, he could possibly kill one Familiar and the Moti was no match for double Psychatog, since he another one in his hand. But his plan died right then Österberg countered the Selection. With that plan out of the window he dropped the second Atog. Still he would need help to get past the two Familiars

Österberg held his Familiars in and started sending in Fat Moti. Like some many times before, albeit a long time ago, the Djinn flew in for the kill while the creatures in the ground beneath it stared on. He might not be as dangerous as Psychatog but he can still get the job done.

Rickard (pointing at the Moti): "I sided one in hoping to surprise someone."
Alexander: "Well, it was a surprise!"