Round 10: Andre Mueller vs. Bas Knapen 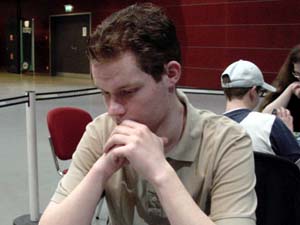 are respected players. Mueller has some previous good finishes, with at Top 4 in GP Genova, and has won some money at the Pro Tour. Knapen is a solid Dutch player.
Both have good R/W decks with lots of tricks.

Bas wins the die roll and chooses to start off. Both players keep their hands, Bas opening with a couple of mountains, and Mueller having a more aggressive start with Auriok Glaivemaster and Leonin Shikari in the first couple of turns. A third turn Bottle Gnomes looks to stop the beats, but Mueller still attacks with the Shikari, bluffing a trick. Mueller plays a Yotian Soldier and is done. A Goblin Replica from Bas makes sure the game continues as a stalemate. Mueller keeps trying to get some damage through, but Bas calls his bluff again. Mueller plays Raise the Alarm, but can't break through. The Goblin Replica is shattered, but no attack is made, as he doesn't want to lose his Shikari. Bas plays a Dirigible that could break the stalemate. Mueller has a Sword of Light and Shadow, pretty good with the Shikari. The Glaivemaster attacks, and Sword is moved onto it before damage.

Bas plays Wand of the Elements, but can't really attack. Mueller deliberates for a while before attacking with the Yotian Soldier and the equipped Glaivemaster. Before blocking, a 3/3 is made. Dirigible blocks Glaivemaster, and the 3/3 blocks the Soldier. Before damage, Bas plays Roar of the Kha, killing the Glaivemaster. The Soldier lives as the Sword is moved onto it. Bas plays Fireshrieker and equips his 3/3 Elemental, which attacks. At the end of turn, the Sword is moved to the Shikari. Mueller untaps and swings with the team. Another mountain is turned into an Elemental, teaming up with the Bottle Gnomes to block the Shikari. The Dirigible blocks a Soldier. Before damage, Mueller plays Stir The Pride with entwine, decimating Bas' team.

Bas is low on land after the Wanding, and plays Serum Tank. Mueller plays Spikeshot Goblin, which, if left unchecked, is looking to machinegun down Knapen's team. Bas moves the fireshrieker to Dirigible and attacks. Mueller moves the Sword to the Goblin and is looking in total control, still at 21. He plays Vulshok Gauntlets and swings with the team, having 6 mana open. Bas has no really good options as this point, as anything he blocks will be pumped up with the Sword or Gauntlets. Before blocking, Bas makes another Elemental, and blocks the Shikari with a 3/3 and Myr, and the Soldier with a 3/3. Before damage, the Goblin shoots down the Elemental blocking the Shikari, then the Sword is moved to the Yotian Soldier, and the Gauntlets are moved to the Soldier token.
Bas' board is quickly deteriorating and he finds no good answers in his next two cards, conceding.

No players sideboard anything, which is as expected in the team draft format - this would imply that the deck was misbuilt in the first place. Mueller is lively and chats a lot with the spectators, whereas Bas is quiet and reserved. Bas chooses to play first. Bas has more action at the start of this game, with a second turn Alpha Myr matching Mueller's double Glaivemaster draw. Alpha Myr trades with a Glaivemaster, and Goblin Replica is played. Mueller shatters the Replica. Bas plays a Vulshok Berserker and storms in for 3. Mueller is out of gas it seems, with no fourth or fifth turn plays. Bas has a Fireshrieker and equips the Berserker, but has no other plays. Mueller's sixth turn play is a Myr, hardly helpful in this situation, other than chumpblocking the Berserker. Bas plays Loxodon Mystic. Mueller's land glutted draw seems unable to keep up with Bas' aggressive draw, but plays Blinding Beam to live a few turns more. Bas plays Auriok Siege Sled, and Andre plays Soldier Replica and Talon of Pain. Roar of the Kha untaps Bas' creatures, allowing him to wipe out Mueller's weenies and forcing a concession.

Mueller kicks off with turn two Leonin Den Guard, Bas having no turn two play. Yotian Soldier follow the Den Guard, with a Serum Tank for Bas. Mueller plays Volshok Gauntlets, looking good with the non-tapping creatures. Bas plays Emissary of Hope, but must take 7 damage from the Gauntletted Den Guard and Soldier. Emissary swings back, giving Bas some life back, but he has no play, and takes 7 again, going to 5. Mueller plays a Soldier Replica. Emissary attacks again, taking Bas to 8. Bas has no play again, and has to discard Goblin Dirigible. Roar of the Kha is just a desperation play at this point, but Mueller even has the Blinding Beam to seal the game.

At this point I moved over to the Hoeh/Martineau match, just starting their Game 3. 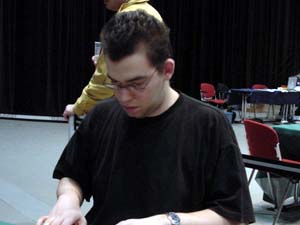 Hajo starts with a green Myr while his opponent has Arcbound Worker and Frogmite. On Hajo's third turn, the Frogmite is deconstructed, and he plays Drill-Skimmer with the extra mana. Another Frogmite is played for 3, Sven not getting his affinity working. Hajo plays Nim Replica and Slagwurm Armor, hardly the best cards in his Red/Green deck. Sven swings with his artifact creatures, trading Frogmite for the Replica, but has no other play. Hajo swings back with the Skimmer but has no play either. The Dutchman has no play, looking land-glutted, and Hajo plays a Tangle Spider at the end of turn, attacking with it and the Drill Skimmer on his turn. Psychic Overload keeps the Tangle Spider tapped down, but Hajo has another and looks in good shape as his opponent is beat down to 5, and a Wizard Replica is played. A Neurok Spy doesn't help the situation much, and Martineau concedes, making the match-score 2-0 in favor of the germans.