Round 10: Ben Ronaldson vs. Paulo Cardona 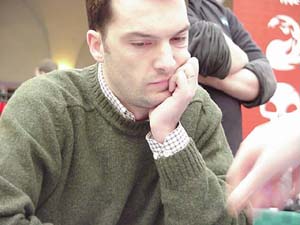 While not many have heard the name Paulo Cardona outside of Portugal, he is much respected within the national Magic community as a solid player and innovative metagamer. This Grand Prix he was touting a version of Miracle Gro which included Skyfolk, Werebears, Swords to Plowshares, but no Enforcers.

His opponent for this round was Professional Real Tennis player Ben Ronaldson, who was touting a very metagamed Oath of Druids deck, designed to beat Miracle Gro, with four Swords to Plowshares and three Powder Kegs main, plus one extra Keg in the board backed up by four Pyroblast.

Before the match began I asked if either player knew the matchup, and while Ben had no idea what he was facing, Paulo had a good idea of what was coming, and was not at all pleased.

During the shuffling period, Paulo checked how long the rounds were, "The round is 60 minutes?" Ben quickly retorted, "50 minutes... 49 now actually", indicating he wanted to get on with the game.

Paulo had won the dice roll and started with a first turn Flood Plains, but Ben had the Wasteland draw for it. Paulo then played a Tropical Island and Brainstormed into all the land he would ever need. Ben played a Flood Plains, and passed the turn, while Paulo played his Quirion Dryad. Now the match was underway.

Ben sacrificed the Flood Plains for a Tundra, played a Tropical Island, and after considering the possibility of Daze, chose not to go for his Keg that turn.

Paulo tried for the Curiosity on the Dryad, and after some thought Ben countered. No Daze from Paulo meant he could only come in for two, and allowed Ben to cast his Keg next turn, uncontested.

Paulo Brainstormed on his turn and tried for a Winter Orb, which, with the keg in play, Ben decided not to fight.

After adding a counter to the Keg, Ben tried for one of his two Oaths, with counter backup in hand. Paulo Force of Willed removing Meddling Mage from the game, which Ben allowed to resolve.

Paulo Brainstormed again on his turn, and attacked Ben down to ten. He then revealed his Swords and Curiosity to cast a Land Grant. On comparative power, Ben's hand was gas, while Paulo's was sadly lacking.

Ben added counter number two to the Keg, and passed the turn, confident that he had the game pretty much sown up. Paulo attacked, and Ben blew the Keg. Paulo then tried for his topdecked Gush, but Ben Forced it removing Impulse, before untapping everything and making his Oath of Druids.

Paulo was out of pressure and over the next six turns his lone Werebear was outclassed by a Morphling, which Ben Oathed up, while maintaining control of the board with Counter magic.

One crucial point came when Ben hard cast the Feeder, and left it in play, trying to goad Paulo into Oathing. Paulo chose not to Oath signaling to Ben that his deck contained no Mystic Enforcers.

The game ended with 21 minutes on the clock, arguably Paulo should have conceded the game sooner to allow for games 2 and 3. Now, however, he was effectively playing for a draw.

Paulo seemed unaware of the time constraints as he took his full 3 minutes for Sideboarding and pile shuffled Ben's deck, very methodically.

Ben played a Flood Plains and passed the turn, showing me his hand his draw was insane, with Flood Plains, Tundra, Volcanic Island, Pyroblast, Powder Keg, Impulse, Brainstorm and Force of Will all in his draw at the end of his turn.

Paulo Land Granted revealing his hand twice, but instead of making a creature, held back to try and Annul an Oath or a Keg. 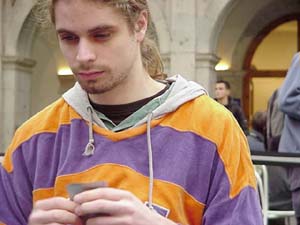 Ben simply played a land and passed once again.

Paulo made the Dryad on his turn, with one blue mana open for Annul, but Ben had the Swords, and Paulo couldn't fight, meaning his early game Pressure was none existent.

Ben then played his Volcanic Island and went for the Keg with Pyro backup, which resolved without a fight.

Paulo played out an Orb and a Werebear, which Ben seemed happy with, and when the Keg detonated to kill these two threats there was only four minutes on the clock.

In short, time was called soon after, and Paulo's methodical pace cost him dearly as he ended the match, 0 - 1 down. This has been indicative of the way Oath matchups finish in this format, with Ben only completing five games in six rounds of Swiss on day 1.