Round 10: Billy Jensen vs. Chris Pikula 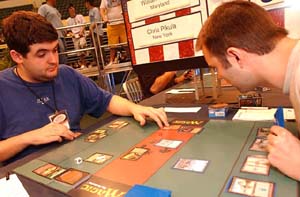 Two of the most liked players on the pro tour, Chris Pikula and Baby Huey kidded around before this, the first match of a draft they each needed to 3-0 to make top 8, cut one another and got to playing.

Jensen started the game with a first turn Chatter of the Squirrel, but before it even got to attack, Chris had blue's best Squirrel stopper, Phantom Whelp in play. Jensen recast the Chatter, while Chris attacked and replayed his dog, then Jensen cast Far Wanderings, getting a Mountain and passed the turn.

Chris's next play was a laugher, as Earsplitting Rats forced Jensen to discard...Basking Rootwalla ' Mark!' Pikula yelled to the observing Rosewater 'Can I call shenanigans?', after which the Rootwalla attacked for three to be joined by Barbarian Bully. Chris then cast Aven Fogbringer, returning his own swamp to his hand and passed the turn.

Jensen's next turn saw an attack en masse that saw discards to the Rats and Bully,, with Pikula paying the four life needed to cancel the Bully's ability. Jensen then cast Phantom Tiger, but it wasn't looking particularly strong, as the Fogbringer and Whelp got in four more points of damage before the dog was recast. Jensen cast a second Bully to go with his one Squirrel and two-counter Tiger, but Chris kept coming, this time playing Organ Grinder. 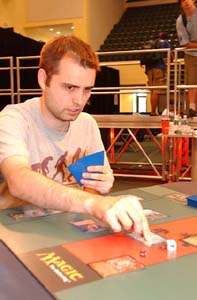 With the score 14-9 in Jensen's favor, the big man untapped, drew and activated the Bully before attacking with it, the Squirrel and the Tiger. The two green creatures died as did the Grinder while the Whelp went back to Chris' hand, but Jensen couldn't capitalize, allowing Chris to take him to ten before Aether Bursting the Bully after its activation.

The Rats and Fogbringer attacked, taking Billy to six life before Chris cast Aven Fisher. After Jensen played the just-drawn Spellbane Centaur, Chris the made a potential mistake, casting Breakthrough for four, tapping out, when the game was close to finished and he might have want to cast the most important spell in the Breakthrough instead. Fortunately for Pikula, Jensen could only cast the long-discarded Firecat Blitz for three, leaving him without enough cats to finish the New Yorker off. A turn later, Jensen was dead.

Playing first, Jensen once again had the first turn Chatter, which Chris was forced to end with Innocent Blood. Having the option the flash back the Chatter, Jensen instead cast Harvester Druid on turn two, adding Ember Beast to it a turn later. Chris' next play was to Crippling Fatigue the Druid, and after Jensen played the Chatter from the graveyard, Chris was ready to get into the action, playing a Wormfang Crab, which phased out a Swamp.

Chris attacked on his next turn as Jensen struggled, casting Laquata's Disdain on the Beast. Jensen then played Phantom Tiger, which Chris immediately Crippled. Things were looking good for the old-timer as he had four cards to one in hand and the hard to stop Crab in play, and he made things worse for Jensen by playing Hydromorph Gull. 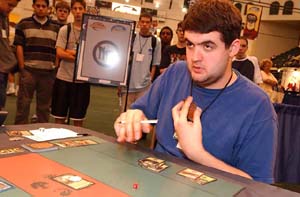 Jensen drew and thought for a while, prompting Chris to ask how many cards he had. When Jensen replied 'two', Chris asked 'are they good?' and Billy immediately replied 'No.'. With the score at 14-14, Jensen decided to go aggro, casting Firecat Blitz for six, doing four damage in the end as his Walla and Squirrel stayed home. Chris untapped, attacked with the Crab and played Treacherous Vampire, leaving Jensen, with five mountains, in a heap of trouble.

Billy's uneventful turn was followed by a Vampire attack, leaving him at seven. A turn later, Jensen drew yet another land and was forced to extend the hand.