Round 10: The Blue-Red Blues

this point in the event it was still early enough that nobody was running away with it, and in fact every player at the table with these guys also had a 7-2 record coming into this draft. With a logjam like that it's important to get your wins in to make a run at the Top 8, something both of these players were surely thinking about coming into this tough match.

For this one Nick had his favored blue-red again (which you can read about in a draft piece Noah and I did). 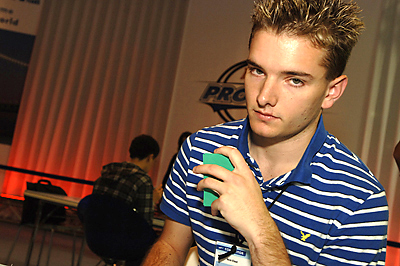 Nick Eisel can kill you with his brain…

Amiel was on the play for the opening game and had the first creature with Thallid Shell-Dweller, but missed his third land for one turn. Taking advantage of that, Nick opened with Looter-il Kor, followed by a morph, and then Coal Stoker plus a second morph on the free turn he got from Amiel's stalled draw. Amiel did what he could, getting out a Basalt Gargoyle next turn, but that just made things worse because of the echo. Once the echo was paid, Eisel was able to snapback the defender (which made a thallid in response), then Grapeshot the Gargoyle, swinging with the team. Suddenly Amiel had zero creatures in play to Eisel's four, and had just 10 life left for a race he wasn't even running yet. Plus, his opponent had been looting since turn three, discarding some frighteningly strong cards and signaling a powerhouse hand.

Finding land #4, Amiel was able to get a Sporesower Thallid out, but Eisel sent his beaters in anyway. The 4/4 blocked Coal Stoker but then went down to another Grapeshot. Amiel had one more blocker next turn but dropped to 1. Empty the Warrens from Nick put the creature count way out of Amiel's reach and there just wasn't any way to survive the board with just one life left. It was a quick, brutal game that lasted all of seven minutes despite some careful thinking by Eisel on his looting. 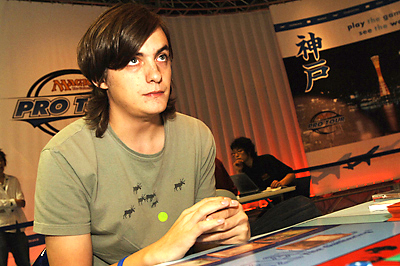 …but Amiel Tenenbaum glares right back.

Again on the play, Amiel opened with Gemhide Sliver for this one, powering into a turn three Sporesower Thallid. Eisel had an Orcish Buzzardier, then used a Lightning Axe to take out the 4/4 next turn. Eisel did his best to burn out the creatures he could reach, but Amiel flooded the table with too much, dropping Scarwood Treefolk, a suspended Nantuko Shaman, and then a double turn of Blazing Blade Askari plus Basalt Gargoyle.

Eisel was on his heels the entire game and looked to be a bit flooded to boot. At six mana he was able to unmorph into Slipstream Serpent to take out an attacker, but he was behind on the ground. With only 3 life left, he didn't have an answer for the Gargoyle, either. One more attack and it was over for the American.

On the draw for the first time in the match, Amiel again had a 4/4 on turn three thanks to the Gemhide + Sporesower team. Eisel had acceleration too, in the form of Prismatic Lens, but only had a morph for his four-mana third turn. Much like Game 2, Amiel began flooding the table with well-costed beaters, while Lava Axe and Grapeshots tried to contain the Onslaught. Nantuko Shaman made an appearance this game as well, helping press the attack while keeping Amiel fueled with cards.

Eisel, desperately flooded, had nearly stabilized the board with an Axe on the 4/4 and then Empty the Warrens for four tokens to hold the ground a bit, but he was out of gas and his opponent had five more cards to work with. Amiel continued making guys, and soon had an Arena to start picking off tokens as well. On the next attack a Strength in Numbers made yet another favorable attack for Amiel. This was followed by a devastating Firemaw Kavu on Eisel's morph, which was painfully revealed to be Fathom Seer. Despite the mana flood, Eisel hadn't have a second Island to draw up the extra cards, an effect he desperately needed as he scrambled to live. 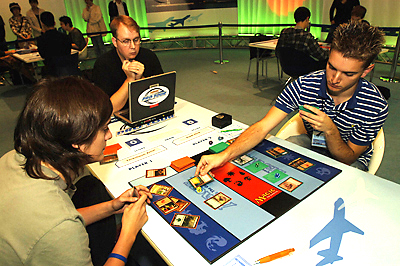 Things got even worse for him when a Pardic Dragon hit next, once the Firemaw had been paid off. Eisel still managed to fight it out, working around the Arena and smartly sneaking a surprise morphed Mawcor into a fight with the dragon to take it down with the help of a Spiketail Drakeling. Out of cards in hand, with nothing in play but land, and facing only the Kavu, Nick needed an answer quick. He rapped his deck and pulled a card, but it was land, which allowed the Kavu to drop him to 5. Amiel was done casting spells too, at least for now, but again Eisel pulled land, dropping to 1. With one more chance, Eisel whiffed a final time by pulling a third land, falling before the raging Kavu and taking his first loss with blue-red the entire weekend.