Round 10: Bob Maher vs. Joseph Crosby

"Are you X and 2?" Bob asked as the competitors sat down for the match. Joe confirmed this to be true and the players prepared to play. 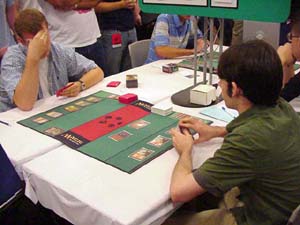 Joe brings Goblins into Day 2, probably the most numerous of the Day 2 decks, while Bob brings Wake with him to the table. If Goblins are number one at this event, Wake is number 1A.

Joe got off to a flying start in Game 1, bringing Goblins to bear on each of the first three turns. Bob was able to recover from the early Onslaught with a turn four Wrath of God, which he had not even been showing until that point. A turn one Elfhame Palace, as well as turns two and three Forests, left him without the required two white mana to play Wrath of God.

Joe was able to get things going again almost immediately, dropping several more goblins onto the table and weighing things heavily in his direction. Bob's life total dwindled lower and lower as the goblins moved into the red zone time and time again.

Bob finally ripped a Decree of Justice, but it was too little, too late. The Decree cycled to make nine soldiers, but Joe had the game won. 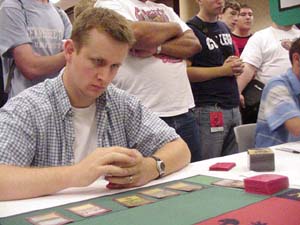 "I'm holding a Firebolt," Joe mentioned to Bob. Bob looked down at his life total and scooped his cards. The Firebolt was enough to kill him.

Game 2 saw Joe get off to another flying start, but he was unable to sustain the pressure. Bob stabilized the board first with a Moment's Peace, then by flashing it back the next turn. The time this bought him allowed him to sit back while Joe overextended into a Wrath of God.

Bob had the full Wake engine going by this point, Compulsion sitting with the Wake on one side of the table. The ability to rip through its deck at a rapid pace is what makes Wake such a potent pile of plastic sleeves.

A Sphere of Law hit the table to go with Compulsion and Wake, and all of a sudden the things that Joe could play were of little consequence. A Goblin Piledriver swung with a Sledder, but the Piledriver only dealt one damage, and the Sledder dealt none. The game was completely in Bob's pocket.

The game continued for a while, with Joe pulling nothing off the top of his deck that would help him win the game. When he heard from the judge that there was only ten minutes left in the round, he scooped. 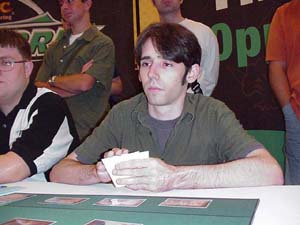 No first turn drop came out of his five card hand, but turn two saw a Piledriver land on the table, and turn three saw a Volcanic Hammer strike Bob's noggin.

A turn four morph creature, when Joe drew his third land, was met with Mana Leak. The morph is flipped over, Blistering Firecat, and it went to the graveyard.

Turn four saw Bob tap out for a spell of his own, Sphere of Law. The Sphere was quite successful for Bob in Game 2, keeping everything from Joe except the Goblin Piledriver from doing damage.

Joe was unable to do anything with the Sphere on the board and quickly passed the turn back to Bob, who took advantage of the lull in Joe's attacks to play out an Exalted Angel. Exalted once, she quickly fell to the earth, or the graveyard to be more precise, the victim of a nasty Volcanic Hammer and Firebolt combination.

Bob seemed unconcerned with her demise though, as he immediately played a second Angel and took off on a game of speed Wake. The judges had called out the five minute mark moments before as Bob started cycling, Compulsioning, doing anything he could to ensure his victory before time expired.

Joe ripped Fledgling Dragon, everyone checked to see if he had threshold. He did, but it didn't matter too much. Bob had already played out a second Sphere of Law, meaning the first four damage from that Dragon would be prevented.

Joe had to send the dragon into the Red Zone to win though, so he first cleared the way. Volcanic Hammer joined its friend, Volcanic Hammer, to kill the Angel. A favorable trade for Bob because it was two cards to one, but unfavorable in that Joe now had a clear path through the Red Zone.

The Dragon swung at Bob, even after Joe pumped it up though Bob only took two damage.

Wrath of God from Bob cleared the Dragon and a Sparksmith from the board the following turn, as time was called. Bob then played an Anurid Brushhopper, but it was too little too late to get him the win.

The two had a brief argument about whether or not Joe should concede in the face of Maher's obvious dominance of the game state. Joe didn't see it that way, though, and the match was a draw.

After the game Bob refused to shake hands with Joe, saying that he never would have done that to Joe.

"There's no way you can win that game," Bob complained. "If I was sitting over there I would have conceded."

The draw pretty much eliminated both players from Top 8 contention, and the feeling among the pros gathered around the table was mixed. Some of them felt Joe should take his point and others felt that the respectable play was to concede.