Round 10: Bottom Set vs. Watch Out for Timberwatch 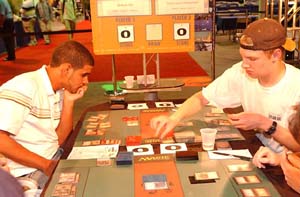 Maher and Reeves made Top 4 last year with Gary Wise, but are teaming with good friend Dave Williams this time around. So far it's worked out okay, but they need to win here to stay in Top 4 contention. The Guevin brothers and Rietzl are the hometown boys from Massachusetts, and came one match away from making Top 4 on their home turf last year. They're in a position to make it this time around, but also need a win to have a shot.

Bob used Krosan Vorine with Alpha Status and another Beast in Branchsnap Lorian to kill an Elvish Warrior for free, and Tom used Break Asunder to get rid of the enchantment. Bob had a pump effect left and summoned Timberwatch Elf to keep his Vorine huge. Guevin played a Vorine of his own, and Bob couldn't find a second Elf to take it down in combat. He had to settle for Carrion Feeder and killing the Brigand on an attack, then playing Explosive Vegetation. This left Tom with little resources left, and he couldn't win.

Neil got a double Zombie Cutthroat draw, and one was stopped with Pacifism. Pete was stuck with just Plains, and couldn't find an Island. Creatures were traded and parity was achieved, but Reeves broke the game open with Reaping the Graves. Pete was in no condition to put up a fight with his mana draw, and conceded a few turns later.

Paul used Scattershot and Erratic Explosion to kill some of Dave's creatures, but Daunting Defender kept things stable on the ground. Aven Warhawk simply came down as a 2/2, and promptly died to Crested Craghorn. Even with all that removal, Dave was able to take the first game thanks in part to the Defender. Dave had an incredible draw game 2, getting Gustcloak Savior and Aven Brigadier out to take the match. 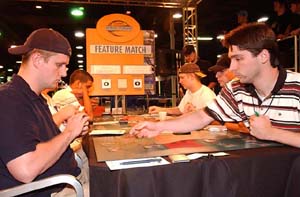 Tom mulliganed his opening hand, and started to voice some disapproval towards Bob, which got a little bit heated.

Meanwhile, Pete had a better mana draw game 2, and had a Cleric team of Aven Redeemer and Whipgrass Entangler out. Reeves played Toxin Sliver and Mistform Seaswift, giving him a Basilisk in the air. Misery Charm killed the Redeemer, and Reeves increased the clock dramatically with Covert Operative, Mistform Dreamer, and Shepard of Rot. From this point, it was easy to take the match, putting Bottom Set one step closer to the Top 4. This made the match between Bob and Tom fairly irrelevant, despite the tension involved at this point. 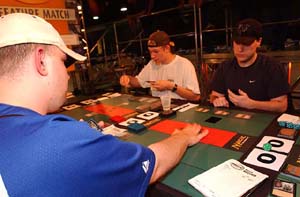 Tom's Hunter Sliver traded with Bob's Vitality Charm token. Bob summoned Timberwatch Elf, getting a reaction from Tom like he had just swallowed a shot of Drain-o. He attacked with his morph, played Wirewood Savage, and ended his turn. Bob simply tapped four mana, and played Explosive Vegetation. Tom attacked with his morph, and after pulling it back from the Red Zone, said he wanted to unmorph it (Zombie Cutthroat) and deal three damage. Bob pointed out that Tom had already taken the creature out of the Red Zone before flipping it over, which signified that combat was over. Tom got fairly angry over this, and protested to the judge who said it was too late to unmorph before combat, but Bob allowed the extra point of damage anyway.

Maher--"I'm just playing back at you Tom, can't you handle it?"

Bob's Timberwatch Elf made combat tough for Tom, who tried to get something going with Patrons of the Wild and Vitality Charm. Meanwhile, Aphetto Vulture was dealing 3 points of damage with each attack. Claws of Wirewood slowed it down for a turn, but it didn't matter. Sootfeather Flock was unmorphed, and pumped with the Timberwatch to finish the game and sweep the match for Bottom Set.