Round 10: Boys of Summer vs. Dan Clegg Uncut

Dan Clegg Uncut is a team of three Pro players: Noah Boeken and Alex Witt of the Netherlands and Brock Parker of USA. Boys of Summer is the surprise Belgian package of Mats Clays, Johan Kennes and Marijn Lybaert that stormed to the top of the rankings yesterday. 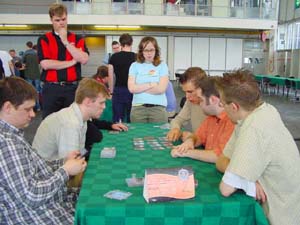 The winner here will be virtually guaranteed a place in the top 4.

Game 1 went pretty disastrously for Witt. His black red-deck dropped a turn 2 Piledriver and then he cast a Hulk face-up to take advantage of it being a goblin. Lybaert summoned a morph then found a Lightning Rift on turn 4 leaving two mana open.

Witt tried to cycle a Gempalm Incinerator in his turn to kill Lybaert's morph. It all went catastrophically wrong. The Lighting Rift triggered first, killing the Piledriver so the morph didn't even die to the Incinerator. Worse, Lybaert's morph revealed itself to be a Zombie Cutthroat and sent Witt's Hulk to the 'yard without even dying in the process.

A Macetail Hystrodon joined the Cutthroat and with the Rift sweeping away Witt's creatures game 1 came to a quick end.

Dan Clegg Uncut also went another game down as Boeken lost the first to Clays.

The Cutthroat came out early in Game 2 as Witt lost a Flamestick Courier to it. He cycled an Incinerator to kill a Coast Watcher – a strange choice for Lybaert to have in his deck as Witt wasn't playing green.

In the center Parker brought some stability to Dan Clegg Uncut by winning his first game against Kennes.

Witt made a couple of morphs but Lybaert managed to rip Lightning Rift off the top with a cry of "So lucky".

Witt had to flip over a Hulk to kill the Cutthroat and lose a turn in the process. Lybaert took full advantage by busting out Mercurial Kite, morph and a Rock Jockey.

With the Rift in play Lybaert mopped up Witt's defenders and smashed through to end the game in a couple of turns.

"My deck is 22 cards and Lightning Rift."

In seat B Parker turned all his monsters into 5/5 dragons to win 2-0 vs. Kennes.

Boeken managed to pull back from a double mulligan and all of a sudden the whole match came down to the decider between Clays and Boeken.

Clays managed to get an early upper hand by flipping over a Plower to destroy Boeken's only forest.

Boeken continued draw mountains but was able to enchant a Symbiotic Elf with Crown of Fury. This joined a Battering Craghorn to make a first-striking wall to thwart Clays offense. He enchanted a Needleshot Gourna with Dragon Fangs to bust through for 4. Boeken came back at him for six and summoned a Krosan Vorine.

Clays retaliated by adding both his morphs to the assault on the next turn. Boeken had to play a game of guess the morph. He got the wrong block and a Snapping Thragg picked off the Battering Craghorn while a facedown Woodcloaker traded with the Vorine. 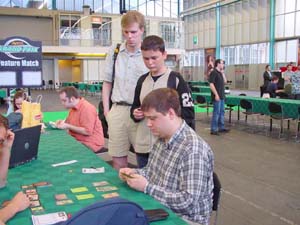 It hurt but Boeken had to cycle a Tusker in search of a second forest. The extra card didn't help as Boeken tried to think of a way out. He passed the turn and Clays beat him to 5 with the Gourna.

Clays sneaked in a hasty Skirk Alarmist and smashed again. Boeken was in real trouble. He blocked the Gourna and pumped his Symbiotic Elf with Accelerated Mutation. Here Clays made what looked like a mistake as he chose to let the Mutation resolve before making the Elf smaller with a Chill Haunting.

It didn't matter as the Dutchman drew nothing and Clays took the game and match on his next turn.