Round 10: Bram Snepvangers vs. Jakub Slemr 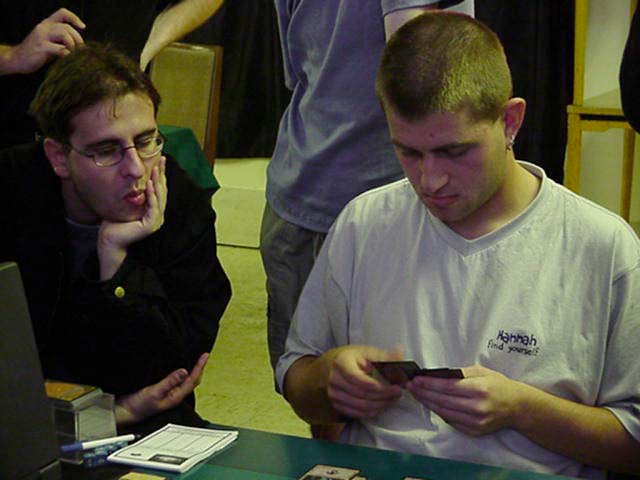 Both players were playing blue spells: Bram had drafted a blue/white deck - forcing blue from the outset on his table in favor of green, whilst Jakub had succumbed to drafting the black cards as there was only one other player in that color.

Bram won the toss and elected to draw.

Then the real spells came into play: a Cephalid Looter on Slemr's side and two Angelic Walls from Bram, followed by a Childhood Horror. At this stage of the game Bram must have felt under the gun as there is very little that a u/w deck can do about the power of the Looter, but nevertheless he replied with an Aven Flock. This was then faced down by an Aven Windreader.

Things started getting a little obscene then as Jakub first cast Repel on the Flock, then Ghastly Demise on a Wall, then Repel on another Wall! (attempting combat tricks with the Childhood Horror threshold - but Bram had an Embolden). To make things even worse Slemr then drew and cast another Ghastly Demise on the Flock.

The Cephalid Looter then continued to produce ridiculous card quality for the Czech: Repel number three (he had four in the deck), Morbid Hunger, Gravedigger and so on. It must be said that Bram put up a brave fight with a (wait for it) . . . . Ancestral Tribute for twelve life - but it was not enough to stop the onslaught, as the Dutchman kept drawing the same cards over and over again.

Once again Bram asked his opponent to go first.

"I've got something against your walls", said Jakub producing a Frightcrawler, but Bram had an Escape artist to level the playing field, followed by a Sandstone Deadfall and a second Escape Artist. Suddenly the 1/1s looked a little shifty though, as Slemr produced a Painbringer, followed by an Aven Windreader.

Ouch - a Sphere of Reason. Snepvangers produced a power-card in the match up, but Jakub did not seem too bothered - casting the first of his Repels. 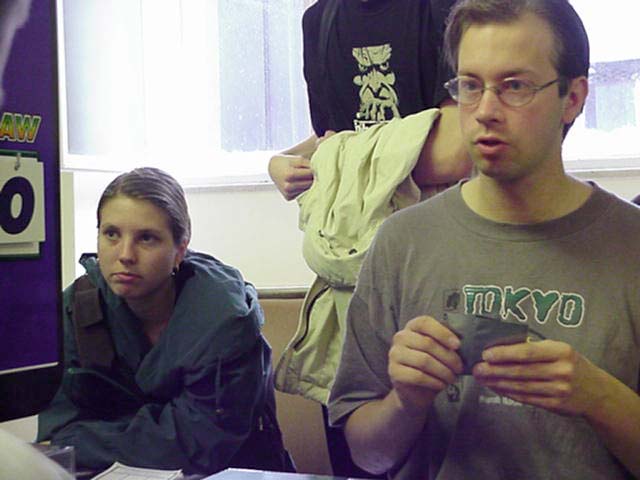 Bram then made a potential problem for the Czech - a Pulsating Illusion which could block pretty much anything his opponent attacked with, but Slemr's deck was so full of tricks that Bram wisely held back from doing so to begin with. In fact, despite facing down a four to one creature table, he actually started attacking with the Illusion, forcing Jakub down to eight, and made an Angelic Wall, trying to cast Gallantry on it to kill the Windreader, but Jakub used his second Repel.

A turn later the board situation looked as follows.

The Painbringer then finished off the Wall that had blocked a Wererat, and Bram had to use the Artifact to remove the Frightcrawler from the game. In the desperate hope that Slemr would forget to use the Painbringer on his Pulsating Illusion the following turn, the Dutchman attacked his opponent down to four, but it was in vain.