Round 10: Breakfast of Champions 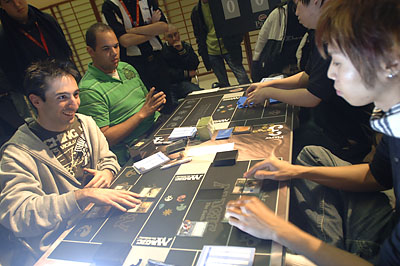 Raphael Levy is a Hall of Famer as of yesterday, and Katsuhiro Mori is a contender for the class of 2010.

Levy was gunning to be the first Hall of Famer to post a Top 8 finish. You might think that he would also be looking for the first money finish by a HoF ringwearer, but Tommi Hovi got that honor in Kobe. Levy was looking over his shoulder at both Gary Wise and Olle Råde, who were sporting similar records. First he had to get through the reigning World Champion.

Mori had been in the midst of a fairly sedate year after winning Grand Prix Niigata and the World Championship coming into Japanese Nationals. He played his Structure and Force deck to a perfect record in the Standard portion of that event and started out Standard here at Worlds with a 5-1 record with his TriscuitTron deck (his build also carried Ishida to a 6-0 record). Mori was a long shot in the Player of the Year race at this point but had two opportunities to at least get himself up into the Player's Club Level lifestyle that he has grown accustomed to between the main event and the team competition on Saturday. 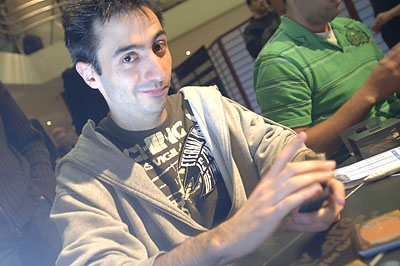 Mori gleefully played Lord of Atlantis to lead off the game and followed it up with Spiketail Drakeling. Levy mustered Pendelhaven Elder on the in-between turn but was not happy about it. He offered up Thallid Germinator in the hopes of getting it countered but Mori hung onto the flier and added Mana Skimmer for good measure.

Levy tried to send in a Crookclaw Transmuter to either block or get countered, but Mori waited for the trigger and used Feebleness to kill it and lock down a Forest with Mana Skimmer. Levy could do nothing about the air assault. He had a morph, which was promptly Faceless Butchered and revealed to be Thelonite Hermit.

The fliers finished off the game in pretty short order.

Mori kicked off with a suspended Errant Ephemeron. It looked like Raph had the trump for it in Scryb Ranger. He attacked for one before adding a Germinator to his team. Mori played a morph and - eyeing the Ranger - stepped aside to ask the judge a question.

Raph attacked only with his 1/1 and then drew a card by Thinking Twice. He also ramped up his mana with Prismatic Lens. Another morph came out for Mori while Levy had a full-price Durkwood Baloth, which was promptly bounced with Snapback to clear the way for an attack for 4.

The many faces of Katsuhiro Mori.

Mori unmorphed Fathom Seer into Sage of Epityr and another suspended Errant Ephemeron. Levy replayed his fattie, but it could only crane its neck to watch the dogfight above. When Mori sent in his Errant Ephemeron, Levy activated his Ranger only to see Tendrils of Corruption aimed at the Faerie. It did get to attack on the following turn though.

Levy was still trying to deal with the flier - with another soon to follow - and flashed out Transmuter to block. When he went to pump it with a Germinator token, Mori flipped his Mawcor and shoot it in response - at least Levy was correct that it was blue. Levy flashed back Think Twice in hopes of finding a pump spell, but the flier died to the pinger. With the annoying Ranger out of the way it was safe for Mori to Assassinate the Baloth.

Levy tried to buy himself a turn or two with an unmorphed Brine Elemental, but Mori had enough mana to flip Coral Trickster and unlock the Errant Ephemeron for the coup de grace.
Levy 0 - 2 Mori