Round 10: Brian Davis vs. Brian Kibler 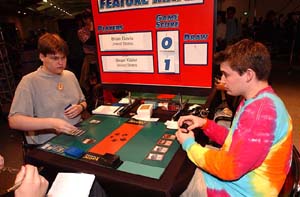 This match was a battle of the Brians, and with both situated at 5-3-1, means that whomever loses this match will be out of the running of the running for the final Sunday. Both are regular denizens of the IRC magic channels, and special note was made for Brian Davis to say "Hi!" to his "fans" in #mtgwacky. Both players were playing control decks – Kibler playing the "Colony" Red/Blue/Black Madness Counterburn deck, whilst Davis played the third most popular archetype at this Pro Tour, Psychatog.

Game 1 was over before you could even blink, as Davis kept a one swamp hand and never drew another land again, and conceded to a 4th turn Psychatog from Kibler. Don't keep a one land hand at home kids... these players are Professional Magic players. 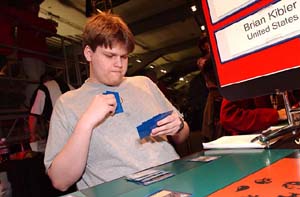 Davis seemed to be eager to sideboard and it was quickly apparent why, with him having many cards that are useful in the control matchup – siding out Bursts, Shadowmage Infiltrators, and a Psychatog for Zombie Infestations, Innocent Blood, Skeletal Scrying and an additional Upheaval. Kibler did have some tech of his own – Flaming Gambit, due o the nature of the deck being creature light. He also added Diverts and Scryings of his own.

The second game began sedately, with both players playing land and passing for the first few turns. It was interrupted by a 3rd turn Zombie Infestation from Davis, followed by a Peek which revealed an insubstantial hand from Kibler (containing 3 land, Circular Logic, Violent Eruption and a Fiery Temper). Seeing an opening, Davis exploded in the next few turns, casting four (!) Concentrates in turns 4 through 7, being protected in each case with a Circular Logic (with Zombie Infestation). The resultant card advantage set Davis up for the ultimate endgame situation, casting a Upheaval and Infestation in one turn. Faced with a quick death from the undead, Kibler conceded. 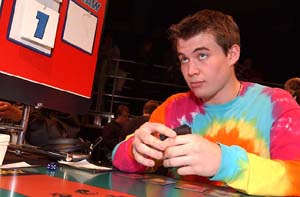 The third game went similarly like the second game, with not much action happening for the first few turns apart from Brian Davis casting Zombie Infestation, as well as Predicting himself a few turns in order to get land. Again after a Peek revealed yet another ineffective hand by Kibler, Davis played a Skeletal Scrying for 3, playing around the Circular Logic that was in Kibler's hand. Following this up was another Skeletal Scrying, this time for 4, prompting the Dragonmaster to exclaim that "This is NOT fair.". After yet another Concentrate, Kibler was powerless to stop the Upheaval/Infestation combo claiming yet another victim.